Dear Diary, what a huge couple of days it’s been for women and women directors here in Cannes. First off, was the moving documentary Let It Be Law by Argentinian director Juan Solanas. His film tells the story of women fighting for the right to abortion in his native country, where shockingly one woman a week dies as the result of an illegal abortion. Walking up the red carpet were some of the Argentinian pro-abortion protestors together with families of women who were victims of illegal abortions. Waving their green flags against the red carpet background, these women were given the recognition and international platform they deserve. And the screening couldn’t have been more timely, given the recent law passed in the state of Georgia. 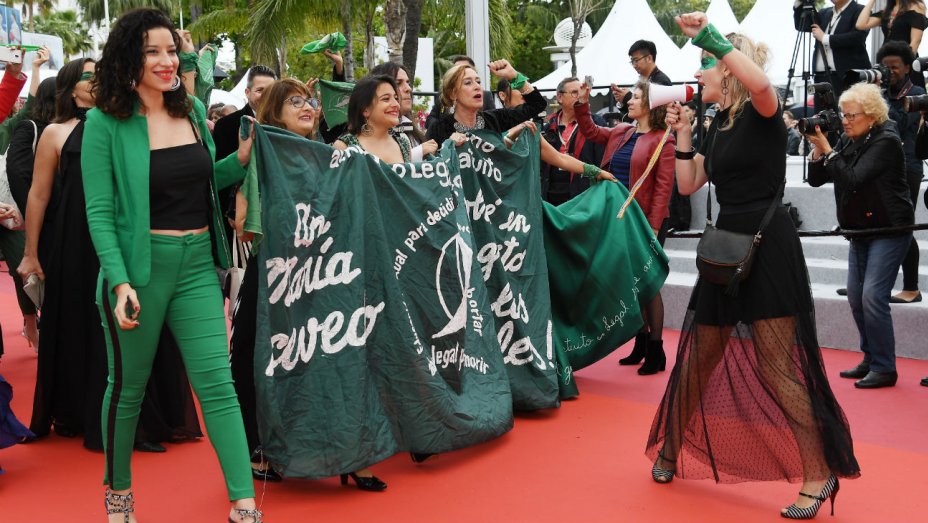 Other women stripped of their freedom to choose are depicted in Céline Sciamma’s Portrait of a Lady on Fire. This is possibly the best film of the festival so far, at least in competition, and one of just a handful of films directed by a woman. It tells the story of a young female artist commissioned to paint a portrait of a young woman, freshly out of the convent and dwelling on a remote coastal French estate. The portrait is a sort of eighteenth-century Tinder image, for it is to be shipped to Milan for the girl to get a prospective husband’s approval. Questions of female bondage are dealt with via the upper-class girl being sold off and the young serving girl waiting on her. The artist represents freedom, a rare commodity for women in 1770. There are virtually no men in this film and the audience is drawn into the intimate lives of these women. I honestly didn’t want to leave them. Bravo, Cannes, for choosing two such important films for women.

However, no plaudits can be given to Cannes for some pretty shabby treatment of the women who are actually attending the festival. So far, we’ve British director and actor Greta Bellamacina turned away for having her baby in tow – and she was attending the screening of her own film, ironically about the trials faced by a single mother. Another issue this year has been the question of female footwear. British director Asif Kapadia (here with his doc Maradona) claimed his wife had been banned from a premiere due to her heels being too low.

What the hell, Cannes? I thought this was a new you, with your baby-changing facilities and right-on attitude after the furore of #MeToo and in the wake of Asia Argento’s devastating remarks about Harvey Weinstein. Instead we have just three women in competition, the same stupid rules about footwear and a woman actually barred entry because she had a baby in tow. Added to mix is the lifetime achievement award to Alain Delon who has got himself into some hot bouillabaisse about his less than charming comments about slapping women and same-sex marriage. Cannes has a long way to go before anything like equality will become a reality. While some wonderful are women depicted on screen, real flesh and blood women are still being treated pretty shabbily. For now, at least, it is more plus ça change than #MeToo here on the Croisette.