LONDON – “I never had any friends later on like the ones I had when I was twelve. Jesus, does anyone?” Thirty-plus years later that immortal line from Rob Reiner’s insightful and deeply moving adaptation of Stephen King’s novella The Body is guaranteed to get grown men misty-eyed whenever they see it on screen. Revisiting Stand By Me is like catching up with an old friend – you may not have seen each other in a long time, but immediately after being reacquainted, you slip back into that old comfortable routine together which only confirms why you had a huge affinity for one another in the first place.

Seeing the film through the eyes of an adult, it’s also clear that Reiner – once a child actor himself – knows intrinsically how to get the best out of his young performers. Where an inexperienced and less confident director might rely on their editor to help build and structure a child’s performance in post-production, Reiner frames his four central characters together for much of the time, in many instances without cutting away, and instead letting the camera dwell on them as they perform the dialogue. This lends an intimacy to the film and also a welcome level of authenticity.

This technique is used to devastating effect in the heart-breaking scene where River Phoenix’s character Chris painfully acknowledges that his fraught family background is the reason why he is looked upon unfavourably by his teachers at school. That attention to detail, performance-wise, also spills into the older teenage cast, particularly Kiefer Sutherland whose restrained, dead-eyed portrayal of über- bully Ace Merrill is every bit unnerving as his blood-thirsty, hard-partying vamp in The Lost Boys the following year.

For all it’s warm 50s Americana trappings, Stand By Me never once sentimentalises the adolescent experience. It’s often a painful place to be – full of the same uncertainties, disillusionment and emotional hardship encountered as an adult. Moments of much needed levity are found by making obscene but playful jokes about one another’s mothers, engaging in light-hearted musings of pop culture from that era, or telling tall tales round a campfire.

This approach to the material has undoubtedly attributed to the film’s longevity. There’s also the added poignancy of rewatching Stand By Me and knowing that River Phoenix, like his character, still had so much to offer the world when he met his horribly untimely end back in 1993. Seeing Chris disappear into the distance towards the end of the film as he parts ways with his best friend Gordie (Wil Wheaton) is the kind of cinematic gut-punch that can only be achieved by the passage of time and the intervention of a real-life tragedy.

To rephrase the film’s aforementioned quote, chances are you’ve seen a whole bunch of films by the time you reach your adult years, but has any of them managed to stay with you the same as watching Stand By Me that first time as a young teen?

More of Stand by me 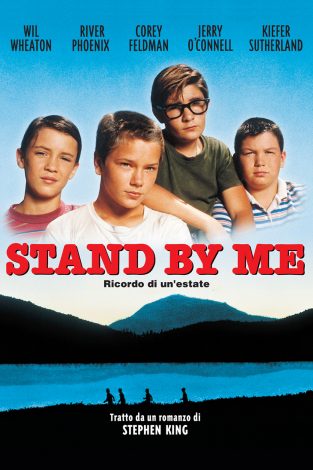