The 1980’s saw the recognition and rise of the geek – a social group which, it’s fair to say, has subsequently gone on to pretty much rule the world. Like most treads, Hollywood was more than happy to shine a light on that burgeoning subculture. Matthew Broderick’s nebbish prototype computer hacker almost caused doomsday in 1983’s War Games. Anthony Michael Hall was teen box-office king for a hot moment and the most overt representation and declaration that geekdom was in full force came in the form of 1984’s Revenge of the Nerds.

But amongst those offerings was a smaller, considerably dialled-down affair which focused on the lone nerd. 1986’s endearing coming-of-age drama Lucas is a tender portrayal of a young outsider, coupled with the age-old tale of unrequited love and the pains which come with that. With a lovely turn from lead Corey Haim – who stays on the right side of precocious throughout – Lucas is a bespectacled 14-year-old high school student with a passion for entomology who finds himself growing close to Maggie, the older new girl in town and the object of his affections (played by Goonies member and perennial 80s crush, Kerri Green).

Haim is utterly charming here and shows real range for his young age, his performance transcending that awkward, broken horn-rimmed glasses-sporting architype. His hijacking of the school football game at the end of the film also displays his then under-exploited flair for great physical comedy. It remains a huge tragedy that he was gone far too soon, but that his transition from child actor to adult performer was marred by those demons which seem all too commonplace with being young in Hollywood.

Watching the actor’s eccentric turn it’s easy to imagine a teenage Wes Anderson stumbling across the film as there’s certainly a touch of Lucas in Rushmore’s Max Fischer, particularly in both character’s bemusing, wise beyond their years perspective on life. Like Rushmore, there’s a love triangle of sorts which forms between the three main characters (a youthful-looking Charlie Sheen plays Maggie’s potential suitor) and Lucas even embellishes his family’s background and social status to Maggie in much the same way as Max does with Rosemary, the older object of his affections.

Another obvious similarity between both films is that painful sincerity which ultimately shines through in the central characters. This is largely why Lucas remains an essential and enduring cinematic love letter to the young underdog, even if he/she has since risen up the ranks to become the co-founder/CEO of an enormous global conglomerate. 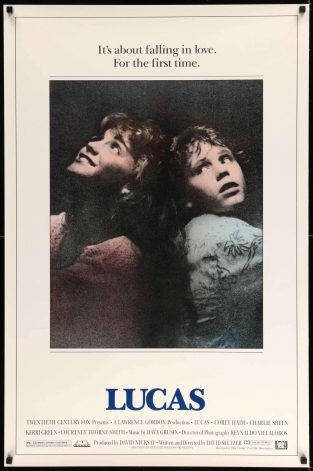