The west coast cultural melting-pot that is Los Angeles frequently goes by the nickname “City of Angels” although throughout many of its representations on the big screen, it appears to be lacking a population which could be described as heavenly. Whether it be the backdrop for a futuristic tale of a world-wearily cop hunting down humanoids, or the exploits of a Detroit-based detective made to feel unwelcome in one of city’s more affluent areas, it’s a place that has often been portrayed on screen stripped of the glitz and glamour usually associated with it. This 1985 tale of a flamboyant criminal and a deeply compromised cop is no exception. 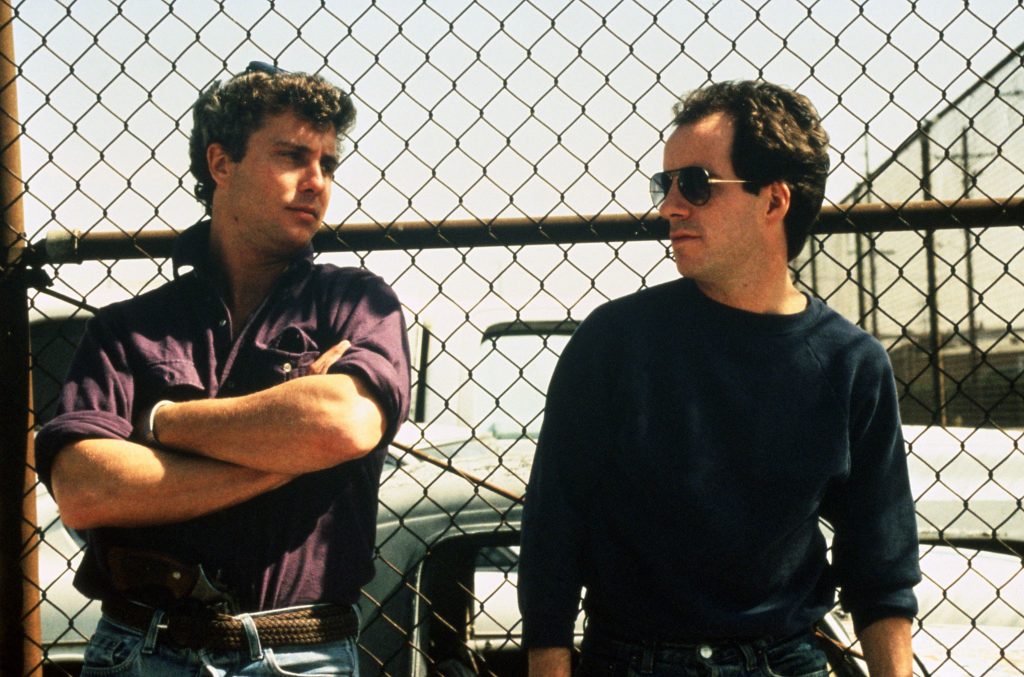 To Live and Die in L.A. it’s a dazzling story of an arrogant Secret Service man, Richard Chance (Manhunter’s William Petersen) whose determination to bring a master counterfeiter to justice is further exacerbated when his partner is murdered while working on the case. This sets in motion a series of increasingly dangerous and ill-advised attempts to get his man, which see’s Chance not so much straddle the line between right and wrong, as trample on it completely, leaving no evident that it once existed. His target Eric Masters (played by a young and androgynous Willem Dafoe) is far from your usual Hollywood heavy.

In his role as both a merciless money launderer and tortured abstract artist – prone to setting alight and destroying his newly produced pieces of art – Dafoe manages to perfectly capture both sides of the kind of complex character that may have looked pretty pretentious on paper. Everything you need to know about what drives his criminal career is captured in an incredible scene near the beginning of To Live and Die in L.A. as we follow Masters’ methodical creation and laundering of counterfeit currency. It’s an early precursor to the now overly-familiar CSI style of throwaway mini-montages, and succeeds here in making this illegal practice look like an art form in itself.

For all of To Live and Die in LA’s stylistic flourishes, it’s still remembered primarily for its infamous car chase, where Chance hurtles headlong into the path of incoming traffic on a busy freeway in a desperate attempt to escape being apprehended after a disastrous string operation. Having managed to capture what is arguably the greatest car chase on celluloid with 1974’s The French Connection, it’s no surprise here that director William Friedkin was able to pull it off a seemingly impossible feat once more.

It’s a truly gripping sequence which manages to remain pretty feasible throughout, and also acts as a nice reminder that you don’t necessarily need a boatload of digital effects or A-Team-esque logic-defying lunacy to deliver the goods. Thirty-plus years later, To Live and Die in L.A remains a fine cinematic glimpse into that alternative side to the sprawling city of Los Angeles, coming off like a sleazy, pulpier version of Heat, as written by Bret Easton Ellis. There are no such things as angels here – just a driven lawman with a determination to bring down his prey, no matter what the costs.