Wedged between their popular Kurt Russell-heavy 1970s features and the later blockbustering Pirates of the Caribbean franchise, Disney’s 80s live action offerings were a mixed bag with both audiences and critics. 1989’s Honey, I Shrunk the Kids was the glowing exception in a decade that saw the studio’s attempts at a spoofy, superhero/James Bond mash-up die at the box office (Condorman) and experiencing many bumps in the Yellow Brick Road by bringing an iconic film back to life (Return to Oz). Released in US cinemas the same week as Tim Burton’s Batman (presumably to offset that film’s gothic gloominess and offer something to a younger demographic) Honey, I Shrunk the Kids was a bona fide hit, presenting Disney with their biggest live-action hit to date.

It spawned a lacklustre sequel three years later (Honey, I Blew Up the Kid), a DTV third feature and a Rock Moranis-less TV series, imaginatively titled, Honey, I Shrunk the Kids: The TV Show. The film launched the directorial career of Star Wars creative head Joe Johnston, who would go on to helm the underappreciated comic book adaption The Rocketeer, and even later, Marvel Studio’s first Captain American outing. Initially Honey, I Shrunk the Kids was pitched to Disney by Stuart Gordon and Brian Yuzna, with the former directing and the latter on board as producer.

What makes this duo such an odd proposition for the film (which then went by the working title of Teeny Weenies) is that both were behind the ultra-gory low-budget horror hit Re-Animator a mere four years previously. Gordon went as far as prepping Honey, I Shrunk the Kids before having to bail due to ill health. Who knows what the guys behind that aforementioned gross-out delight (one infamous scene features a decapitated head trying to give, well, head) would have brought to a Disney family feature? Sadly Gordon has never had the opportunity to dip his toe in that world again, having spent his subsequent career largely working on similarly low-budget exploitation stuff.

But what was Gordon’s loss was undeniably Johnson’s gain, and the debut director was able to craft a light, breezy Amblin-like adventure, with assistance via a fun turn by long AWOL 80s comic Rick Moranis (in a role originally earmarked for Chevy Chase) and some inventive practical effects and props that really help sell that shrunken world. Like any kind of concept-heavy fantasy work, the film’s success really rests on the strengths of the characters and the game performers.

The teen cast (none of whom, surprisingly, have gone on to adult career success) all acquit themselves well. You really root for them as they make their treacherous journey from now jungle-like garden, back to the safety of the patio. While the effects may have dated and have a distinct quaintness in this CGI age, Honey, I Shrunk the Kids remains an amiable yarn and a fun standalone effort from the Mouse House before the Star Wars and Marvel universe came barging through it’s door. 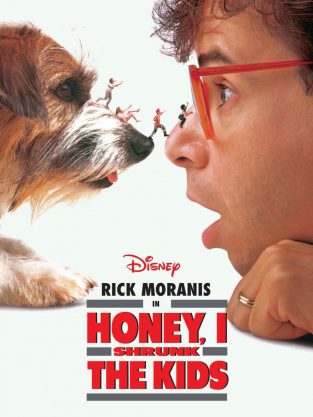 Honey, I shrunk the kids