Rutger Hauer has always been the epitome of cool. It wasn’t just the scene-stealing – film-stealing – turn as Roy Batty in Blade Runner, or the demonic presence of his serial killer in The Hitcher, reminding us that Dante describes the deepest circle of Hell as being ice-cool. It was those – ‘it’s not easy being a dolphin’ – Guinness adverts that got me. In his black trenchcoat and blond barnet, the man looked like a walking pint of Guinness. But his filmography from the early Dutch films to his latest Hollywood adventures is full of rich pickings. Here are five Rutger Hauer hits that you can watch today.

NIGHTHAWKS (1981) – Sylvester Stallone channels a transvestite-Serpico-look in a New York based proto-Die Hard. Hauer stars as Wulfgar, a Carlos-the-Jackal-style international terrorist whose only weakness is flamboyant disco dancing. We first see him as a professorial type with beard and brown hair in London crashing out of a hippy party with a machine gun hidden in his guitar. But a facelift and dyejob later and Hauer is the more recognisable nordic nutcase, who gives us a taste of how enigmatic and sexy the murderous can be. With the help of Billy Dee Williams, he also effortlessly steals the film from under the nose of a grumpy Sly Stallone. Watch it on CHILI: Nighthawks 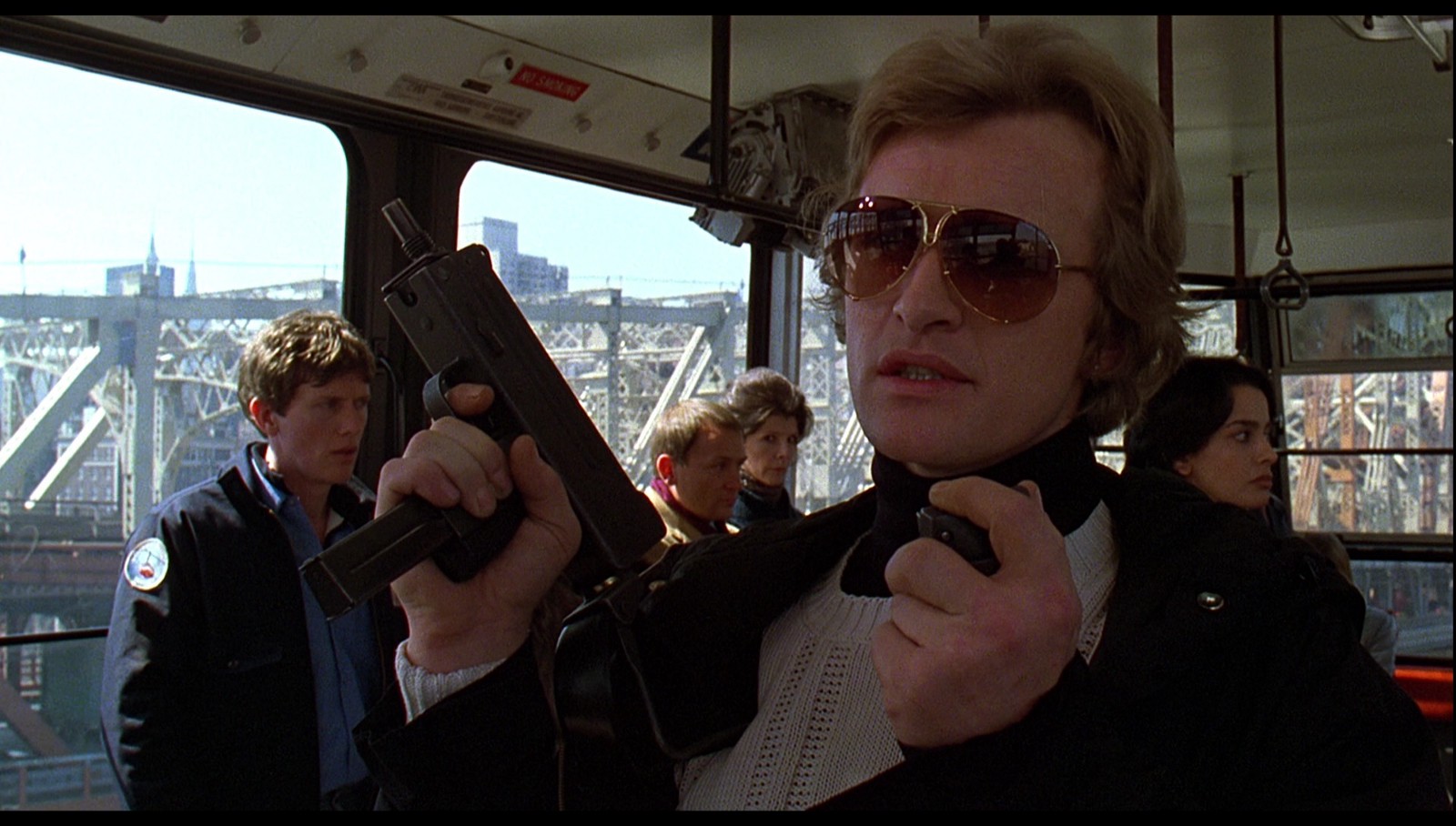 LADYHAWKE (1985) – Richard Donner’s 1985 fantasy was originally to star Kurt Russell in the lead, but when he pulled out during rehearsals, Hauer – who had turned down the role of the villain – stepped in to play the hero for a change. His Captain Navarro is a straightforward romantic lead, despite his lupine transformations. The pairing with Michelle Pfeiffer makes for one of his rare romantic pairings. Matthew Broderick provides bareable comic relief as pickpocket Gaston. Watch it on CHILI: Ladyhawke 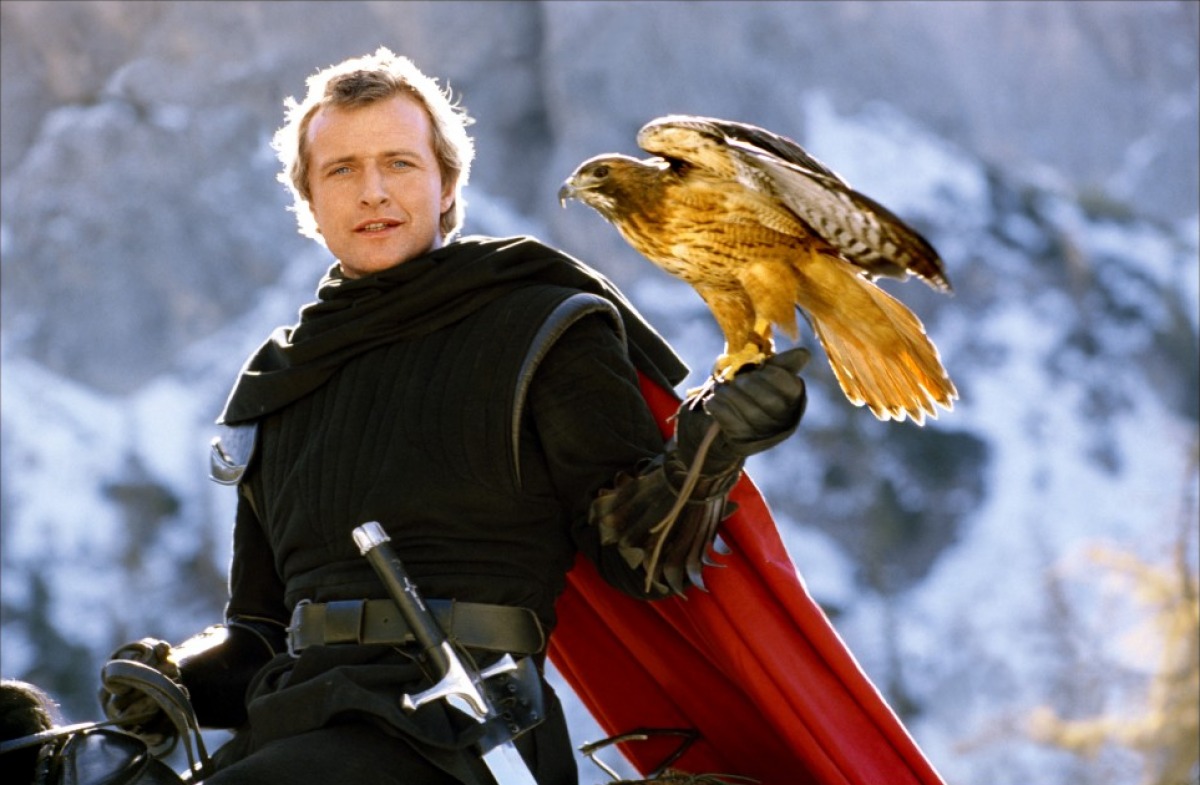 BLIND FURY (1989) – There was a time in the 80s where every third film had to feature a screwed up Vietnam vet wreaking some kind of bloody vengeance. Here Nick Parker (Hauer) is a vet injured in the war left for dead but then trained in Zatoichi-type skills by local villagers. Or as one poster for the film put it: Nick is ‘quick as a snake, strong as a bull, not to mentioned blind as a bat’. Phillip Noyce keeps everything very light, with much comedy made of sightlessness: Hauer pets an alligator – ‘nice doggy’ – in an early scene. Watch it on CHILI: Blind Fury 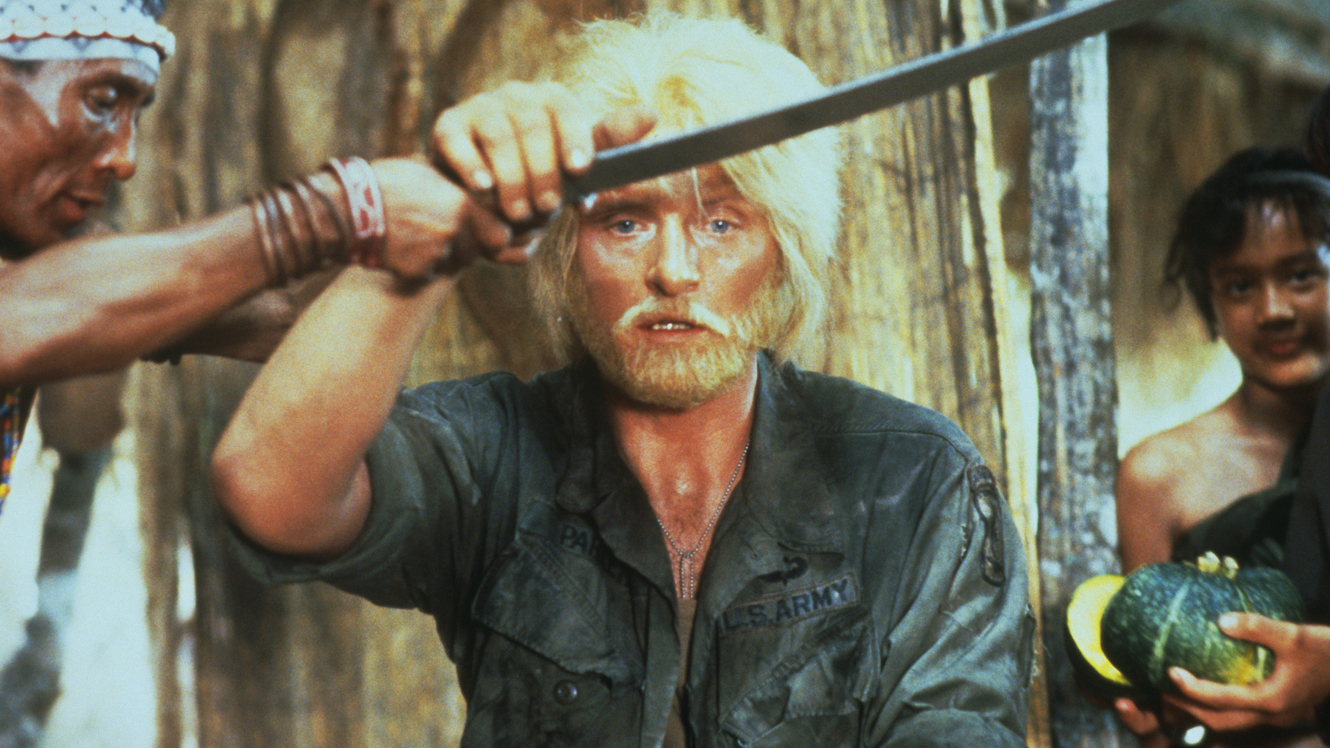 CONFESSIONS OF A DANGEROUS MIND (2002) – George Clooney directs a Charlie Kaufman adaptation of Chuck Barris’ ‘autobiography’, which confesses that as well as being the creator of the Gong Show, Barris was also an assassin for the CIA. Hauer plays a German counterpart Keeler, with a tired melancholy but also a familiar wit. Other character parts would see him appear in Batman Begins, Sin City and more recently a blink and you’ll miss it role in The Sisters Brothers. Watch it on CHILI: Confessions of a Dangerous Mind 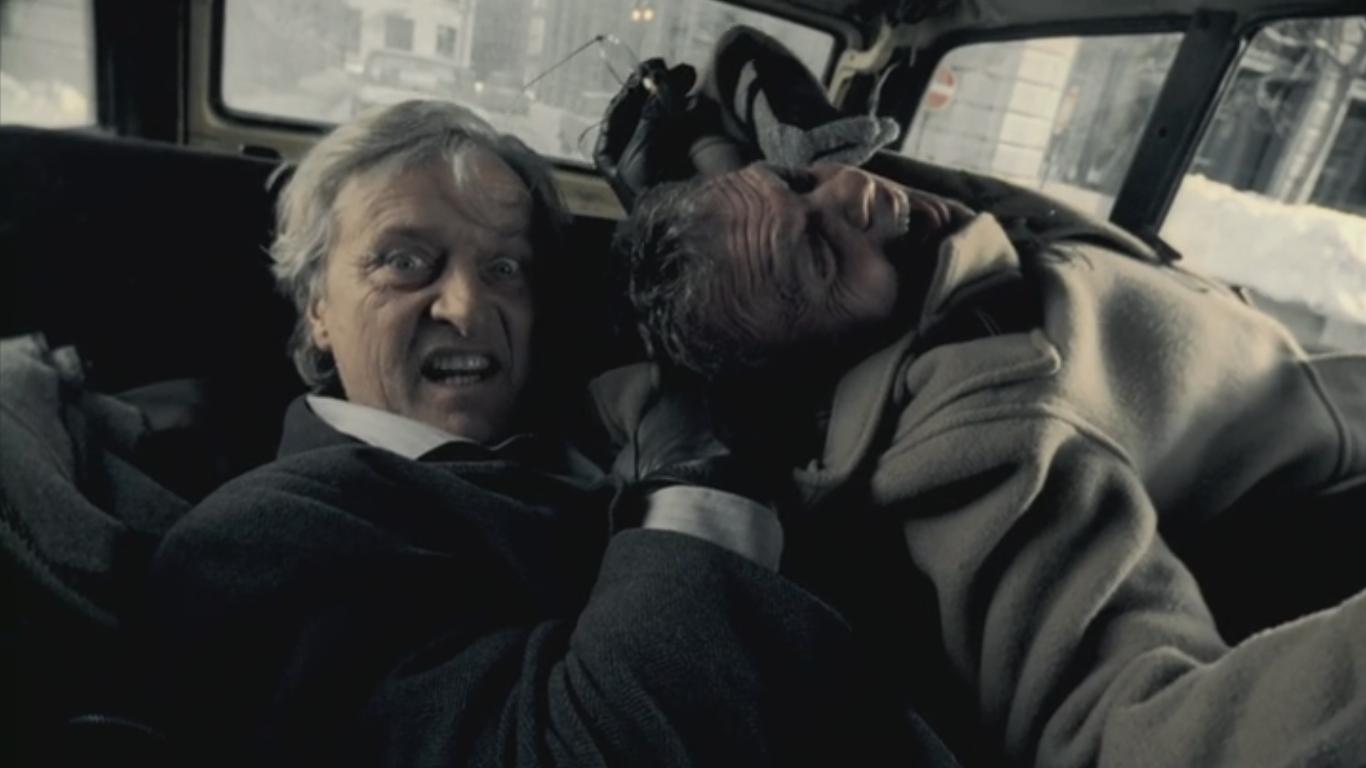 HOBO WITH A SHOTGUN (2011) – Just in case there was any danger that Hauer might be aging too respectably in 2011 he picked up the eponymous lead in this throwback to the VHS thrillers he’d done in the 1980s. Jason Eisener’s feature was based on a trailer produced for the Eli Roth – Quentin Tarantino Grindhouse experiment. The film is a ludicrous gorey comedy with Hauer throwing in the ham as the shotgun wielding vagrant. It’s a gloriously funny and over the top tribute to many of the films with which Hauer himself cut his teeth. 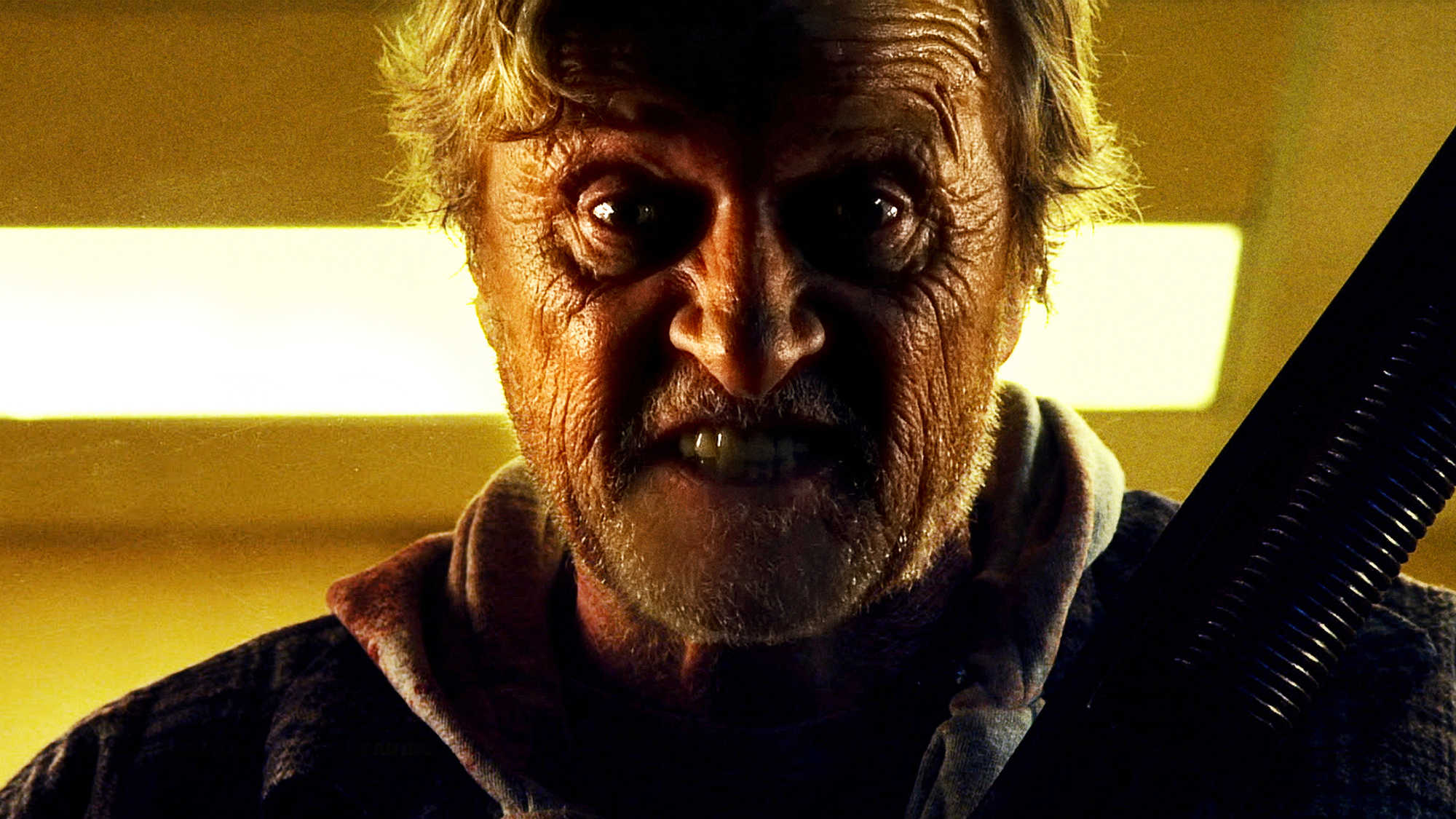