As the momentum builds around Marvel Studios’ slate of films and TV series for the highly anticipated phase four, the biggest cheer any Marvel property received last July at San Diego’s Comic-Con came not from those titles initially announced but by the surprise appearance at the end of the panel of Mahershala Ali and the bombshell the actor will play vampire hunter Blade in a reboot. The fact that the film isn’t even due in that next batch of Marvel offerings – we’ll have to wait at least three years for it – speaks volumes of how beloved a character Blade remains amongst fans.

Back in 1998 when the character was first unleashed upon the big screen, director Stephen Norrington managed to craft what would essentially be the modern template for the comic book film. Dispensing with a lengthy origin scene – Blade’s conception as a half-vampire during birth via his infected mother is given a fleeting prologue – we’re straight into the stylised blood-letting and vampire slaying action as the opening credits play. In a sequence which remains as stunning today as it did upon first viewing, the grown-up Blade (Wesley Snipes) interrupts a rave club in full flow, the growing euphoria of the crowd stemming from the geysers of blood spraying from the overhead fire sprinklers as opposed to any chemical enhancements.

As the group of partying vampires revel in on blood-drenched dancefloor, the sprinklers suddenly run dry, and we’re slowly treated to a dazzling first reveal of Snipes’ sword-wielding, black outfitted “day-walker”. It’s an iconic moment, and the resulting adventure trades on Snipes’ ice-cool personification of the character as he tangles with protagonist Deacon Frost (a fun turn by the perennially underrated Stephen Dorff) all the while struggling to keep his own bloodthirst in check. That dichotomy in the character is certainly one of the reasons why the film still holds up today.

Norrington’s confidence with the material and tone undoubtedly paved the way for what Bryan Singer was able to achieve with his first X-Men film in that sense of taking comic book creations and placing them within a contemporary real-world setting. It’s a huge shame that the director still appears to languish in movie jail following his disastrously-received adaptation of The League of Extraordinary Gentlemen way back in 2003. That the only high-profile Marvel adaptation to see a big screen release in the US before Blade was 1986’s Howard the Duck only underscores what a triumph Blade was. But it was also something of a punt at the time by New Line to relaunch the Marvel brand to cinemas using a character who was only really familiar to these with an intimate knowledge of the comic world.

Even now Blade is hardly recognised as the company’s big-sellers on the book shelves. It all comes down to having faith in the material, something Marvel Studios displayed themselves a decade later when they decided to bring to life Iron-Man – then a mid-tier Marvel character – only for him to become the binding agent and pivotal figure of the MCU. While Guillermo del Toro’s Blade II might be seen as the superior film by some fans – ignore Blade writer David S. Goyer horrible directorial stab with the third film and series nadir, Blade: Trinity – the original Blade remains a breathlessly entertaining addition to the extended Marvel cinematic world. Make no mistake, it was the memory of that first film which had fans foaming at the mouth during Kevin Feige’s surprise announcement in Hall H.

Watch the official trailer of Blade: 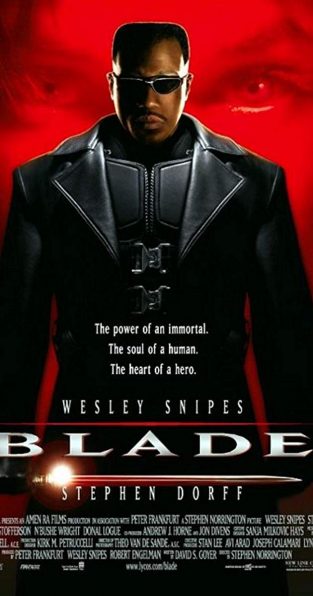