The cinema release of Tully not only marked the third collaboration between director Jason Reitman and script-writer Diablo Cody, but the film also brought them together again with the great Charlize Theron. The results of their labour, Young Adult, has yet to still receive the kind of due it thoroughly deserves. It’s a terrific character-driven look at adulthood in arrested development and felled by misjudged nostalgia, all wrapping up in a subtly dark comedic outlook. It also courageously offers up a lead protagonist who is as pretty much as far from likable as can possibly get.

We first catch thirty-something divorcee Mavis Gary (Theron) in a pretty dishevelled state. Moping around her unkempt apartment the morning after yet another boozing night, she’s furiously quaffing down a two litre bottle of Diet Coke. Mavis is the ghost author of a series of young adult fiction novels, whose popularity is on the wane. Living her life like the superficial adolescent characters she writes about, she makes an ill-advised decision to head back to the small Midwest town where she grew up to win back high school sweetheart Buddy (Patrick Wilson), she’s under the horrendously mistaken assumption that he’s still deeply in love with her, when in reality, he’s happily married with a young child.

Back in town and steadily concocting her nefarious scheme, she bumps into another figure from her school days, Matt (Patton Oswald). Semi-debilitated after a violent teenage incident and stuck eking out a modest living as a bookkeeper in the very existence Mavis despises, he unwittingly becomes a sounding board for the writer, despite her apparent indignation towards him and the life he leads. Theron effortlessly disappear into the role here, and similar to her turn as real-life serial killer Eileen Wornos in Monster, it relies on her ditching any vanity as a performer and revealing a delusional, often extremely unpleasant persona.

Make no mistake, Mavis is as thoughtless and insensitive as they come, but just as she was able to humanise Wornos, Theron does an excellent job here of keeping the audience engaged despite her character’s egregious flaws. Some of the credit here must be attributed to Cody’s quality writing, That delicate attention to detail is beautifully illustrated during the opening credits where Mavis keeps rewinding the cassette player in her car to the beginning of her favourite track (on an old mixtape from the Buddy era) before the song has had the chance to play out to the end. Everything you need to know about Mavis is served up right there.

Populated with a fine selection of 90’s indie rock numbers from both sides of the Atlantic which manage to cast a halcyon glow over that decade, Young Adult remains a highly-accomplished piece of work from a trio at the top of their game and who’s bold and risky creative decisions are paid off handsomely. Above all, though, the film completely contradicts the misperceived and outdated Hollywood scriptwriting mandate that in order for a film to work, your protagonist must be likable. 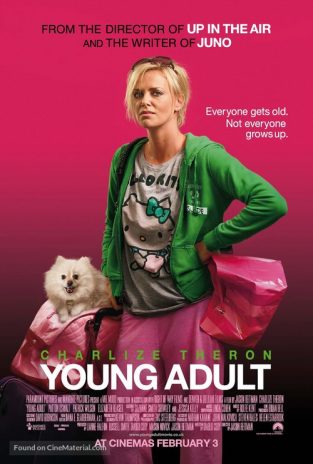