Some superhero films are so wildly misjudged and inexcusably bland – X-Men Origins: Wolverine is one which immediately springs to mind – that there really is zero enjoyment to be gleaned from repeat viewing. However, there are a select few whose awfulness is not only endearing, but they feature enough genuine “I can’t believe they actually went there” scenes, that they’re almost begging to be watched again, particularly as a fun, collective viewing experience. Here’s five Best Worst Superhero Movies which fit the bill.

SUPERMAN III – The first (and so far, only) superhero film to open with the hapless and unintentional villain (Richard Pryor – whose casting alone in such a movie is a stroke of comedic genius) waiting in line to receive an unemployment cheque, this is a Superman film like no other. The sheer amount of misplaced slapstick and sight gags scattered throughout could only happen when you bring in such an idiosyncratic filmmaker like Richard Lester – who helmed the amazing Beatles musical comedy A Hard Day’s Night amongst other sixties oddities – and let him weave his magic in a big-budget adventure of a straight-laced, deeply American hero. The resulting film makes zero sense throughout, but it’s packed with loads of amazingly peculiar moments, which even the comic book writers of that day would have found too outlandish for the page. It also features arguably the best scene in any Supes film, before or since, when he has to essentially fight against his evil self, following a run-in with tainted Kryptonite.

HOWARD THE DUCK – When George Lucas, feeling buoyant after his success with that galaxy far, far, away, decided to bring to the screen the exploits of Marvel Comics’ Howard the Duck – one of the more bizarre and outlandish characters from that universe – he could never have envisioned just how poorly-received it would become. Nominated for seven Razzie Awards, it’s a film which is generally grouped amongst that list of all-time biggest Hollywood failures. While no one could argue it has blossomed in quality in the last 30 or so years since it was first released, it’s a film which has certainly garnered a cult appeal. From the hilariously unconvincing ‘guy-in-a-suit’ central performance – the actor in question seemingly failed to hang out by a duck pond for even a day – to the sheer misjudged tone of the material by creative husband and wife team Willard Huyck and Gloria Katz (the screenwriter of Indiana Jones and the Temple of Doom, incidentally). A modern audience spoiled by the slick cinematic offerings from Marvel Studios need to revisit this film ASAP for a fun palate cleanser.

Watch Howard the Duck on CHILI

SUPERMAN IV: THE QUEST FOR PEACE – Any such list would be remiss without including the forth film in the original cinematic outings of the Man of Steel. By now most fans are well-versed in how and why this film – which actually has a ‘story-by’ co-credit for star Christopher Reeve – went so unbelievably pear-shaped. Produced by eighties schlock cinema merchants Cannon Films, the film’s budget was drastically reduced during production, causing key storylines to be scrapped and special effects being made on the cheap – and in some cases, hysterically reused again within the film itself. Make no mistake, this film is an utter mess, but that dip in quality is precisely why it remains so entertaining. Kick back and rejoice at Superman’s magical stop-motion attempts at rebuilding part of the Great Wall of China, and witness arguably the lamest villain in the history of comic book cinema with the DNA of Superman-spawning, Nuclear Man.

Watch Superman IV: The Quest for Peace on CHILI

BATMAN & ROBIN – Director Joel Schumacher, empowered by the success of his previous exploits of the Caped Crusader in Batman Forever – a film which, in hindsight, is marginally less terrible than this follow-up – decided to go all out and assault the audience with a full-blown, ugly neon-splattered feature-length toy commercial. This 1997 disaster will forever be known as the Batman film which managed to out-camp the sixties TV series. Schumacher completely misjudged what a blockbuster audience and die-hard fans of the character were was looking for. It’s hard to believe a film like The Matrix arrived only two years after this, and from the same studio. But Batman & Robin is still an amusing viewing experience, for all the wrong reasons. George Clooney has never looked so stiff and vacant, and the horribly miscast Arnold Schwarzenegger (as villain Mr. Freeze) is working under the misplaced assumption that merely spouting the kind of horrible puns which worked in this eighties action career heyday, is enough for a Batman film.

SUPERGIRL – While the small screen version of this character has been a bona fide success – four seasons and counting – it’s fair to say the 1984 cinematic attempt to launch a Super-franchise was met with less enthusiasm. Serving as a spin-off from Reeve’s film series, the adventure of Superman’s cousin was a financial and critical disappointment, yet there’s still a fair amount to enjoy here. Having spent much of their budget on acquiring an assortment of respected Hollywood thespians – amongst them Mia Farrow, Peter O’Toole and Faye Dunaway as the film’s principal villain – the producers must have had next to nothing to pay for any urgent last-minute script revisions. The story is all over the place and the film is forever hopping around, unsure whether if wants to be serious or campy. But there’s still that occasional sense of awe and wonder found in the earlier Superman films (helped immeasurably by that fabulous Jerry Goldsmith score) and the sheer randomness of the film’s casting – the late British comic Peter Cook also pops up as a practising warlock – is enough to give it a novelty factor. 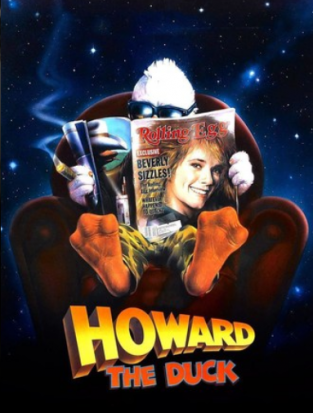