AMERICAN MOVIE Occasionally a documentarian strikes pure gold in the unearthing of larger-than-life subject matter, which is exactly what director Chris Smith (Jim & Andy: The Great Beyond) does here in his debut feature. American Movie focuses on deluded but amiable loser Mark Borchardt and his attempts to make the “great American movie” while unable to keep up with the child maintenance for this three kids, hold down any regular employment or pay back all the money his once-encouraging family have lent him throughout the years. Aided by his best friend, a dead-eyed acid and booze casualty called Mark, we follow the making of his low-budget horror short Coven, which he hopes will eventually fund his ultimate dream project. Even the most accomplished script-writers would struggle to craft such well-defined characters and the hilarious situations they find himself in. Seeing Mark’s weak, elderly uncle (and reluctant moneyman) attempts at providing a dubbed line of dialogue in post-production and failing disastrously time and time again is utterly priceless. Unmissable.

SEARCHING FOR SUGAR MAN  One of the wonderful instances where truth is stranger, the Academy Award-winning Searching for Sugar Man follows two South African music lovers who set out to discover the truth about American musician Rodriguez, a sing-songwriter with an fevered, almost Bob Dylan-like cult following in their home country, but who is unknown elsewhere, including the US. Amongst the film’s many delicious twists and turns is a compelling look at a talent who wasn’t tainted by fame, largely because it eluded him for so long. Watching the footage of a gobsmacked Rodriguez being joyously received by his adoring fanbase upon touching down in Cape Town is incredibly poignant. Anyone unfamiliar with Rodriquez and his musical legacy prior to this documentary will immediately be accessing their music streaming/downloading sites to immerse themselves with the singer’s incredible back catalogue as soon as the end credits roll.

DIANA VREELAND: THE EYE HAS TO TRAVEL Ostensibly this documentary about legendary Vogue writer/editor Diana Vreeland may look like it holds limited appeal to those outside of the fashionista crowd, but that’s far from the case. It’s a fun and fascinating history lesson which illustrates how Vreeland made her indelible mark through the decades, from challenging and bringing change to the post-war female sexual liberation via the fashion world, through to hitting her stride in the Swinging Sixties and beyond. The film is comprised of a series of one-to-one interviews, archival TV footage and chats with her close associates where we’re witness to Vreeland’s Forrest Gump-esque habit of rubbing shoulders with significant historical figures offers some of the most entertaining moments in the film, as she nonchalantly reels off encounters with the likes of Wallis Simpson, Coco Chanel, Buffalo Bill and even a young Adolf Hitler (she recognised that the Fuhrer’s moustache was a massive fashion faux pas back when he was Chancellor).

THE WOLFPACK Every once in a while a real-life tale springs up seemingly out of nowhere, offering the kind of rich reveal and intriguing backstory documentary makers could only dream about chancing upon. The Wolfpack opens with a homemade version of Reservoir Dogs being recreated by a group of similar- looking teenagers, all of whom are giving surprisingly committed performances. In fact, you could be forgiven in thinking that you’ve stumbled into the middle of a team of real-life counterparts to Wes Anderson’s precocious central character from Rushmore. What transpire is that those performing, the Angulo brothers, have almost exclusively been confined from an early age to a cramped threadbare Lower East Side New York apartment by their controlling father and home-schooled by a loving, if ill-advised, mother. Crystal Moselle’s absorbing debut works as a non-fiction companion piece to Yorgos Lanthimos’ 2009 darkly comic social satire Dogtooth. The Wolfpack is bizarre viewing at time yet ultimately offers an uplifting and inspiring story of a band of outsiders.

McCULLIN The world-renowned Don McCullin spent over three decades of his illustrious career on the frontline of human conflict. From 1969 to 1984, he was the celebrated photographer for The Sunday Times, where he covered an assortment of wars, a number of famines around the world, and even the plight of the homeless in sixties London. Unsurprisingly, all of the above makes for an enthralling documentary, but filmmakers David Morris and Jacqui Morris have gone one better than a simple biopic by actually calling on the man himself to offer a haunting retrospective of his work. You may have casually leafed through one of the photographer’s books in the past, or even visited a gallery of this work, but this documentary is a must-see for anyone who has ever expressed an interest in learning what life is like on the other side of the lens. 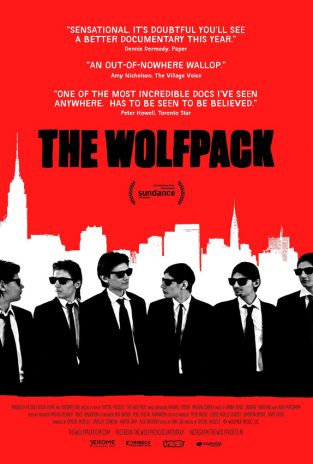