In director Joe Dante’s endearing 1989 horror comedy The ‘Burbs starring Tom Hanks and Carrie Fisher, ‘love thy neighbour’ is a term mostly adhered to by the residents of sleepy cul-de-sac, Mayfield Place. Save for the odd lawn care dispute and unwelcome dog mess, the street is free of drama. But the occupants’ relatively peaceful and semi-boring existence threatens to be disturbed by the arrival of the mysterious Klopeks, particularly for immediate neighbours Ray Peterson (Hanks) and wife Carol (Fisher). The trio of unidentifiable Eastern Europeans (“Klopek – is that a Slavic name?”) keep themselves to themselves, spending all night using their basement furnace and paying zero attention to the general upkeep of their property.

Ray and his fellow suburbanites, a jumpy war vet (Bruce Dern), an antagonist teenager (Corey Feldman) and a bumbling loudmouth (Rick Ducommun), begin snooping around, convinced their new neighbours are engaged in nefarious activities. Revisiting The ‘Burbs, it’s easy to see why the film has grown in statue and likability over the years. Ostensibly, it’s a rather silly and gentle little satire, but there’s something undeniably magic about it. Hanks – channelling his eminently likeable everyman routine – certainly plays a big part in its long-lasting popularity. His hilarious meltdown towards the end of the film showcases that wonderful physical comedy he’s capable of performing, something we see less often nowadays as he gravitates towards older, more inherently serious roles.

Dante’s ability to tease out the possibly of something bizarre lurking underneath that mundane suburban veneer conjures up a familiar Spielbergian set-up. It’s of little surprise that both filmmakers formed a fruitful collaboration during the 1980s, covering similar ground mostly notably in the first Gremlins film. Dante has much fun – particularly with The ‘Burbs – in taking those wildly embellished urban myths perpetuated across generations and different social circles, and using them as means of stoking the imagination and ramping up the paranoia of an otherwise well-adjusted neighbourhood.

The director is also happy to play out the mystery surrounding the Klopeks on a leisurely basis, making great use of his terrific ensemble cast, and skilfully mixing elements of horror without alienating the core PG demographic. The ‘Burbs also benefits from a wonderfully playful score by the late, great Jerry Goldsmith, who collaborated many times with the filmmaker in that era. While the film bottles it slightly at the end with the obvious, neatly-tied-together resolution – which would have benefited from maintaining some ambiguity – the enormous sense of fun established by Dante and his cast in the run-up more than makes up for any shortcomings.

Why Big is still as magical thirty years later 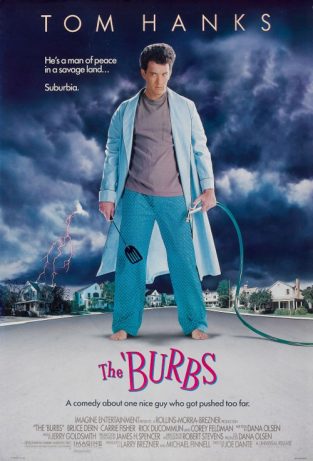