On July 17, 1969, Easy Rider was released in the (dis)United States of America. With its experimental style, its rock soundtrack and unconventional heroes, the film was a road movie set out to discover the counterculture  and yet already had an elegiac spin on the decade. Two cowboys Billy the Kid and Wyatt Earp in search of a new American Dream and once more … we blew it. 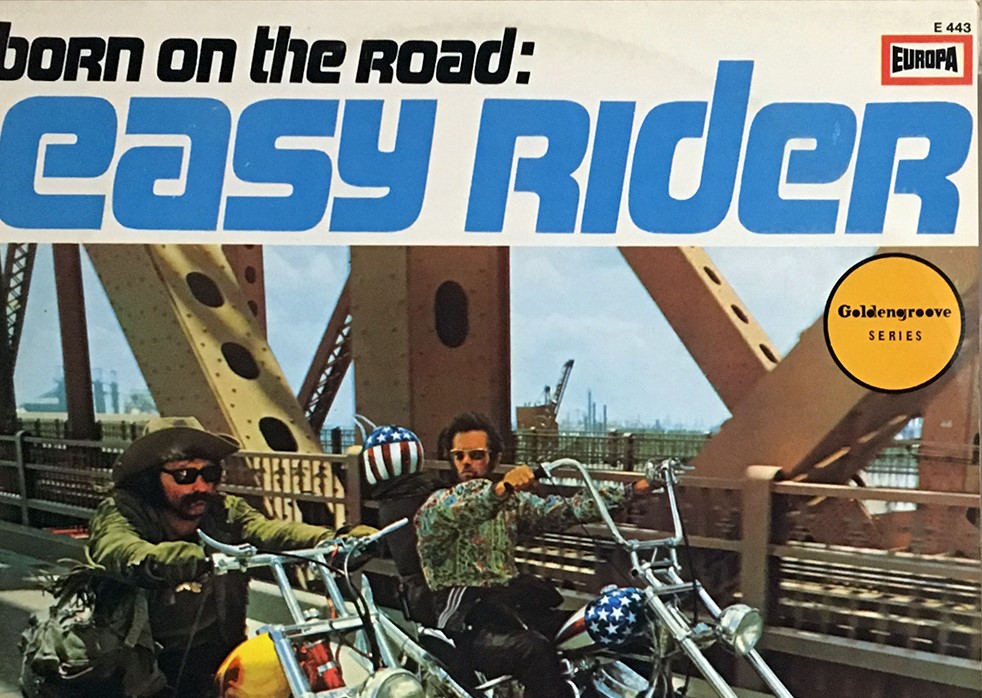 The Music – ‘Get your motor runnin’, Set out on the highway…’ Although we start with Billy (Dennis Hopper) and Wyatt (Peter Fonda) scoring drugs from a dealer played by record producer and later murderer Phil Spector, the film really kicks in with the title sequence and “Born to be Wild” by Steppenwolf. Throughout the film the music choices are perfect with contributions from The Band, The Byrds and The Jimi Hendrix Experience and costing in licensing fees threes times the shooting budget. The music also was influenced by Stanley Kubrick’s 2001 a Space Odyssey in that it was once more a so-called needle drop soundtrack with no original score as such.

The Stars – Although the three young leads were relatively fresh faces, they were also each involved in Hollywood to a greater or lesser extent. Peter Fonda was obviously the most famous as a member of the Fonda family with dad Henry, an icon and sister Jane, a sex symbol. He’d earned himself cult status with his appearances in such films as The Trip and Wild Angels. Dennis Hopper had already spent a decade popping up in Hollywood movies and TV shows and being James Dean’s best friend. Finally, Jack Nicholson was probably the least known, but even he had already spent years as a factotum and actor for Roger Corman, appearing in The Little Shop of Horrors among others. Karen Black and Toni Basil have brief but striking roles as a pair of prostitutes sharing acid with the boys.

The Drugs – So the plot is essentially the tail end of a drug smuggling operation. The earnings from a cocaine deal are going to put Wyatt and Billy in the cat bird seat, and the rest of the film is what to do once you’ve made it. But of course drugs are also part of the whole experience with a lot of being stoned and a finale of dropping acid – once more inspired by 2001 a Space Odyssey. The campfire scene where lawyer George (Jack Nicholson) is introduced to grass for the first time has to be one of the funniest scenes much copied and rarely equalled. Editing, photography and structure were all influenced, or under the influence, with Hopper especially chemically fuelled. The final trip in a cemetery in New Orleans features a raw moment where Wyatt tearfully asks a statue – addressing her as mother – why she left him. Fonda’s mother had killed herself when he was ten. 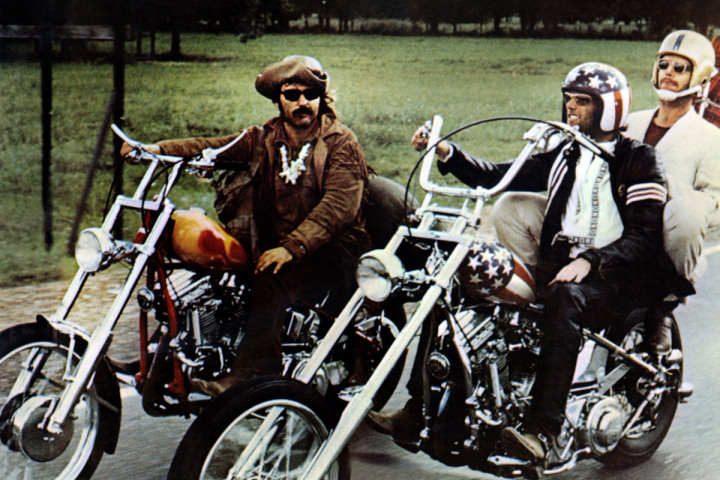 The Bikes – The motorcycles for the film, based on hardtail frames and panhead engines, were designed and built by two chopper builders — Cliff Vaughs and Ben Hardy — with suggestions from Peter Fonda. There were multiple copies of the bikes but they all got either destroyed during the shoot or stolen. When it came to film the famous campfire scene, the bikes had already been stolen and so are nowhere to be seen.

The Maniac – Dennis Hopper was by all reports a mad man on set. Preferring ad-libbing to the screenplay written by Terry Southern – who also came up with the title – Hopper got into constant fights with Fonda who was partly bankrolling the movie. He drank and took drugs and fought with his cameraman and the rest of the crew. During a casting meeting with Rip Torn – who was to play George – Hopper decided to have a go at southerners and Torn a Texan took exception. Editing proved equally contentious and success did nothing to calm down the mad man. His next movie (though actually quite good) was regarded as a disaster – prophetically called The Last Movie. And Hopper spent much of his career channelling his madness into roles of tormented men on the brink of sanity culminating in Frank for David Lynch’s Blue Velvet.

The Legacy – The film was almost immediately seen as a generational game changer. made for a relatively low budget with no big stars it became one of the biggest earners of the year and more importantly dominated the conversation. A studio blockbuster like the Burton-Taylor Cleopatra by comparison looked as old as … well … Cleopatra. The film along with Bonnie and Clyde and The graduate ushered in the New Hollywood of the seventies and influenced American independent film makers for decades to come. The tonal shifts, from comedy to bleak violence, the use of music, the guerrilla style technique, the immediacy, the fresh acting style and the idea that there was an audience out there who the suits simply didn’t get… it was like Dylan said: ‘Something’s happening here but you don’t know what it is’. That counterculture would become the culture. The music, the fashion, the ethos. But 50 years on, as a certain someone promises to make Make America Great Again, it’s worth watching how violent the reactionaries were then and how violent and hostile they still are today.