Quietly in the background, the Warrens are creating quite the cinematic imprint. Outside of the MCU where actors are indebted to their employer, revisiting the same roles over and over again, has there been any filmic creations that have appeared as frequently on screen as Patrick Wilson and Vera Farmiga in such a short space of time?

Since The Conjuring in 2013, we’ve seen them grace the silver screen no less than four times, and are currently filming a fifth outing. These appearances expand across semi-seperate franchises, for it’s not just The Conjuring they appear in, but in spin-offs too, featuring in both The Nun and now in Annabelle Comes Home. Because they’re based on real people – and the real people had their fingers in many a demonic pie – rather that re-cast actors to play the roles, instead the two performers have made them their own, taking on the role as just being The Warrens, in this grander universe that unites these spooky narratives.

So what does keep bringing them back? Clearly it’s not just the allure of the Conjuring trilogy (the third currently underway), as they’ve moved across into the realm of the spin-off, alluding to the notion that perhaps the characters are just as appealing to us as the world that we inhabit. First and foremost it feels like it could be something of a safety, the pair exude a sense of calmness, and when we’re left alone without their trusty guidance, we long for their return. They represent a sense of normality, when they’re around we gather things will be okay as they know what to do to help overcome these evil spirits. We yearn for them just as we do daylight in The Blair Witch Project, we feel vulnerable without them.

The filmmakers play up to this idea, if you take Annabelle Comes Home they’re off away for the weekend, leaving their young daughter and her babysitter to their own devices – and naturally that’s when things all go wrong. Having the pair represent this sense of comfortability works both ways too, for when they appear scared or when they deem a task too formidable to overcome, a spirit too nefarious to defeat, it adds an even greater tension to proceedings as usually they’re who we look to for reassurance. It’s like if a doctor looks at a patient with a terrified look on his face – that’s the person we need to let us know things are okay, if they don’t even agree then we know we’re having a rough time.

What helps is their nonchalance, they treat their vocation as being just that, it’s a job to them, and while we’re threatening to run out of the cinema and go and hide behind a bin and wait for it to all blow over, just having them stroll into a scene with a ‘here we go again’ look smacked across their face is quite essential in calming our nerves.

They also represent us – and that’s partly why they’re such easy characters to invest in. They’re cynical too, they have doubts about the afterlife’s intentions and they share our suspicions. This is vital as by our very nature the audience are always somewhat sceptical, we need to be convinced – particularly when dealing with themes such as ghosts and poltergeists. But when they share those same concerns and they too need some convincing, it means that when they’re satisfied, in turn we are too.

Another element which surely helps is that they are real people. These are not merely fictional creations; the Warrens excised in the real world, and this gives them a semblance of magnitude that proves so essential in having the viewer completely invest and give themselves to the story at hand. Just the chilling photos at the end of the film of the real couple give the entire project a whole new purpose, and a sense of realism that is integral. Suddenly all this nonsense (yes, it is nonsense) we’ve abided by seems plausible, and even if you’re a complete cynic like me, it still just gives you that second of doubt, but in this genre a second can mean everything. Plus, as they’re real and we know they didn’t die during these spiritual encounters, it means well, we know they don’t die. While that could be seen as a spoiler perhaps, a flaw in the narrative that could affect the film’s tension and suspense, to be honest, in a film with so many scares going on, just having that one nugget of happy knowledge proves to be really beneficial.

Lastly, they’re likeable, talented actors. Wilson and Farmiga are both incredibly endearing, they’re affable and when they’re on screen, we enjoy their company. In this instance their casting is spot-on as they both have an ‘everyman’ quality about them, and it brings the viewer closer to this world, we feel that the Warrens could be us, or our friends. Anyway, during the press tour for Aquaman I sat down with Wilson and in that time I couldn’t help but pose this very question: what is it about the Warrens that keeps bringing us back?

“I think with Ed and Lorraine it’s just a very different dynamic that you’re used to,” he told me. “When there is a series of horror films usually your following people that have been affected by the demon or whatever it is, and I’ve done that with insidious, but with Ed and Lorraine they’re each investigating stories and very dark stuff, so to counteract that you bring out this relationship with them and that’s something people really latch on to. We’ve got this sort of idealised versions of these two characters and me and Vera have such fun because you get involved in such horrific storylines that tax you to the bone physically and spiritually, that when you come out of that you wanna just be opposite someone you have a great relationship with, have that chemistry with and can build that family with. It comes down to whether you care about these people, and people really deeply care about Ed and Lorraine Warren, and you wanna see them help other people and see them help each other, so I think we’ll keep coming back to them – as long as they work.”

Annabelle Comes Home is released in cinemas on July 12th. 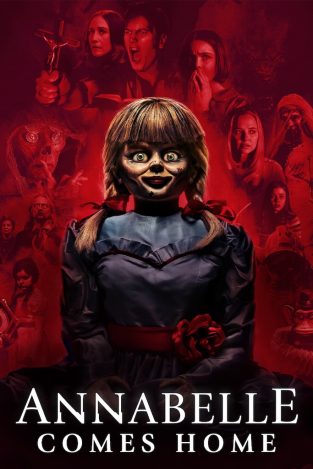