No one is tamping down expectations. The second trailer starts with the two suns of Tatooine and for its first half presents a compilation of iconic moments from the whole saga up until now. It’s like that bit in Return of the Jedi when C3PO told the Ewoks the story thus far, but with better video editing and scoring. We see Luke, Han and Leia, Vader, Kenobi, and the droids in the most dramatic scenes of the original trilogy, then a slightly less in depth retread of the prequels – no Jarjar – as the soft melancholy take on John Williams’ theme becomes increasingly bombastic and we enter new previously unseen footage.

The voice-over of Mark Hamill and a glimpse of Carrie Fisher confirms their presence in the new film, but there’s also a sense that the baton has been handed over. ‘We’ve passed on all we know,’ Luke says. ‘A thousand generations live in you now.’ If there was one criticism of the first two entries in the new trilogy it might be that they were overly concerned with serving the elder generation that sometimes the younger characters didn’t get a big enough slice of the drama pie. Han Solo’s death was the key moment of Force Awakens as Luke’s was in The Last Jedi. Here, it feels like the film belongs to Finn, Rey, and their companions. As well as (obviously) the wonderful Adam Driver as Kylo Ren. 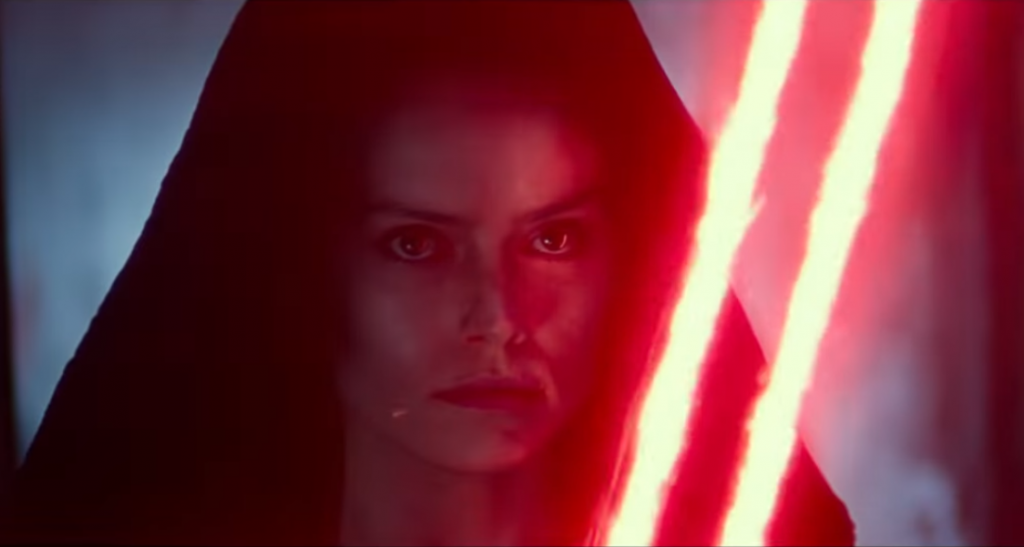 The Last Jedi feels increasingly vulnerable to retconning. Love him or hate him, Rian Johnson was certainly brave in some of his narrative decisions and none more so than the reveal that Rey (Daisy Ridley) was not a Skywalker and her parentage was in fact humble. With the title of the film and the trailers now released, it appears that Rey will be fundamental and her identity could well be revealed to be that of a long lost Skywalker. In a way there’s no reveal that would be a surprise at this point, having been so extensively picked over. But JJ Abrams has form in selling a huge surprise that isn’t a huge surprise: see Khan’s identity in Star Trek into Darkness.

“The Dark Side is strong in this one” – from the moment that we’re into the new footage there seems to be a suggestion of a will she or won’t she dilemma, regarding Rey and the dark side. She opens her eyes with a fairly wicked glare on and by the end of the trailer she looks like a Sith. We have also the return of the Emperor confirmed in the poster art. There are lots of shots of Darth Vader from the original trilogy as well as being created in the prequels and his death mask from The Force Awakens. We even get a shot of C3PO looking red eyed and wicked. Surely, not? And finally what ever the audio version of iconic is, well that, for the asthmatic breathing of the Sith Lord that closes the trailer off.

Finally, the trailer teases a whole slew of worlds, some of which look familiar – is that Jedha? Are those woods on the Moon of Endor? – but others look totally different, like the water planet and somewhere that looks crystalline. There are fresh characters – I bet Finn’s (John Boyega) copilot is Lando Calrissian’s daughter. Naomi Ackie is credited as Jannah, but come on. Ultimately, the excitement is building and this trailer has a confident epic feel to it that should get all Star Wars fans well and truly revved up.