Another week, another beloved film from the eighties reaches yet another cinematic milestone. It feels slightly odd celebrating the 30th anniversary of Die Hard, given how the film has grown into a perennial Yuletide favourite in those years since its release. But regardless of the film’s Xmas setting, it was a summer month way back in 1988 which heralded a new action hero – in the form of budding A-lister and small-screen romantic lead, Bruce Willis – who wasn’t an indestructible and heavily tooled-up muscleman, intent on taking down multiple bad guys in a burst of seemingly limitless ammunition.

Before John McClane’s barefooted fight for survival as he outwits a gang of ruthless terrorists in the Nakatomi Plaza, that decade traded mostly in the patriotic kick-ass Reaganite philosophy, where the likes of Stallone, Schwarzenegger and Chuck Norris were either kicking ass and taking names on home turf or in the hostile land of their enemies. It took a normal everyday cop in the right place at the wrong time to not only reinvigorate the action genre, but remind audiences that their heroes didn’t need a clearly-defined six-pack to save the day. Die Hard paved the way for the likes of Keanu Reeves in Speed (one of the many films to reconfigure the Die Hard formula), Nicholas Cage’s brief and somewhat unlikely tenure as go-to Hollywood action hero, and ultimately the path of government-sanctioned assassin turned fugitive, Jason Bourne.

Tapping into the hero’s vulnerability and stripping him of almost anything which would be of aid (including, in a perfect piece of foreshadowing, even his shoes) might look like a simple narrative device in a modern cinematic landscape. In 1988 however, not only did it give audiences that new persona to root for, but it increased the emotional stakes tenfold. Now a five film series, watching Willis stray from the original’s everyman conceit with each subsequent film, and witnessing that physically-improbable, digitally-aided carnage, only makes you yearn more for the (semi)grounded exploits in the first film.

That’s not to say Die Hard is perfect. It’s stuffed with too many peripheral characters who ultimately add little to the mix other than some brief comedic one-liners and throwing up a couple of obstacles for McClane to swerve. But held up against the contemporary Hollywood action features with their over-reliance on CGI and improbable superhuman physical feats, Die Hard is not only a gripping, beautifully dialled-down thriller, but rightfully remains a cinematic landmark. How many other action films have spawned such a vast array of copycat premises that they could almost be categorised in their own hefty sub-genre? 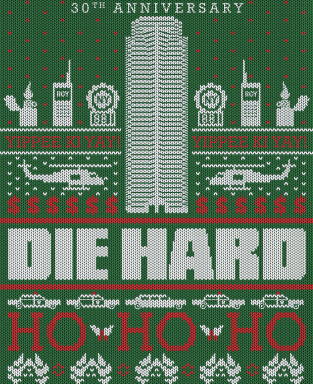