The eighties revival in pop culture doesn’t seem to be going anywhere soon. Over the past few years we’re had a whole host of films and TV either set in that decade (Super 8, Cold in July, Stranger Things, The Guest, Red Oaks, Atomic Blonde, the remake of IT) or styled to look like they were (Hobo with a Shotgun, Drive, It Follows). Turbo Kid is a Canadian/New Zealand co-production that definitely resides in the latter camp, but what could have been easily been an empty pastiche with the usual nostalgia nods and references to that now fabled decade, is actually full of heart and invention.

Directing trio François Simard, Anouk Whissell and Yoann-Karl Whissell – whose recent follow-up Summer of 84 is another worthy inclusion for the above list – fill their frame with a Day-Glo comic book sensibility, complete with hilariously exaggerated scenes of blood-letting and limb-lopping that makes the likes of Tarantino’s Kill Bill films seem timid by comparison. Following the obligatory solemn voice-over explaining the film’s post-apocalyptic setting – before amusingly adding that the year in question is 1997 – we’re introduced to a lone warrior known only as The Kid (Munro Chambers). The Kid actually shares some similarities with Rey, Daisy Ridley’s character from the recent Star Wars films.

Like her, he was orphaned as a child and he spends his time pedalling around the wasteland on his BMX and looking for artefacts which he can display in his disused fall-out shelter, is decorated like an adolescent’s bedroom. He’s also constantly under threat from the tyrannical Zeus (Michael Ironside – chewing the scenery with campy relish) who is intent on harvesting humans for their precious supply of H20. Chancing upon a crash site one day, The Kid discovers the actual costume of the fabled Turbo Man comics he constantly obsesses over in his little den.

Suiting up, he’s joined by a mysterious girl named Apple (Laurence Leboeuf) and together they venture out to rid the world of Zeus and his gang of marauders, who all look they’ve come directly from attending a Mad Max-themed kids costume party. As to be expected, the references fly thick and fast, but the abundance of eighties iconography is imaginatively woven into the film – from the detailed art direction, to the enjoyable hat tip moments to similar genre works from that decade (the makers even factor in one last surprise nod towards the end of the film).

Amongst all the frenetic action and gory mayhem, Turbo Kid still manages to retain a sweet centre, helped largely by a memorable synthwave score by electronic duo Le Matos – who have since excelled themselves with their astounding work for Summer of 84 – and some willing performances from its neophyte cast, particularly Leboeuf who brings a ditsy, half-crazed sincerity to her role of side-kick/potential love interest which is truly infectious. For those who came of age during the heyday of the video shop, Turbo Kid will undoubtedly offer an appealing call back to those times. What’s even more satisfying, however, is discovering just how well it manages to evoke the era it apes and the loving reverence in which it does so. 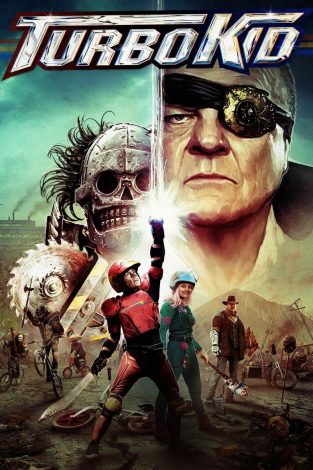