LONDON – Few filmmakers make such a big deal about the chronological numbering of their cinematic output, than auteur Quentin Tarantino. Every film comes complete with a poster that cites which number production we’ve reached – and with Once Upon a Time in Hollywood now out in cinemas, it’s clear to see the controversial filmmaker has claimed this to be his ninth movie. Now, many would resent this notion and consider this is actually him finally reaching double digits, but he seems to consider the two volumes of Kill Bill as being just one movie. Now, given they’re his films, we’re gonna let him have this one – and so we’re compiling our own list of Tarantino’s NINE films, ranking them from worst through to his very best.

The Hateful Eight. Though beginning with a sumptuous Ennio Morricone overture, regrettably this, the weakest of Tarantino’s work, heads steadily downhill from thereon. There’s no denying how precious this film is as a cinematic experience; in an age of streaming the filmmaker was on hand to remind us of what cinema, and only cinema, can bring, presenting the film in 70mm and even having an intermission, ensuring this really did feel like an event. But it lacked substance, and though the dialogue was engaging, it felt a little contrived, with more focus on sounding cool than actually driving the narrative forwards, with a static, tedious storyline. I mean, I still liked the film, it may be his weakest but there was still plenty to be admired – which says a lot about the consistent quality in this director’s work.

Death Proof. If ever there was a film of two halves, this is it. The opening half is Tarantino at his most, well, Tarantino – it’s slick, it’s cool, it’s intense and gripping, everything you could wish for from his work. Focusing in on a group of woman having what they think is a quiet drink at a bar, only to be terrorised by Kurt Russell’s Stuntman Mike. In the latter half, a different set of girls encounter the same antagonist, but this time they decide to fight back. It’s dull, and not particularly well-written, and we guess given the theme of the movie, encouraged Tarantino to cast renowned stuntwoman Zoe Bell, and while we more than admire her work, it’s fair to say she’s not exactly well-equipped to lead a Tarantino movie, even if only half of one.

Kill Bill Volumes 1 and 2. Kill Bill follows the conventional formula of the revenge plot thriller, the one man versus the world approach, that illuminated the screen in films like Taken or Oldboy. But in this instance that very protagonist has been refreshingly gifted to an actress, as Uma Thurman dons the now iconic yellow jumpsuit, and starts kicking the shit out of anyone who dares step in her way. It’s worth noting that both films do feel very much like their own beasts, they’re two seperate films and personally we reject the idea that they should be grouped together as one. That said, they’re tonally similar, and you can tell they’ve been spawned from exactly the same, creative mind. So we’ll let him have this one.

Django Unchained. Django Unchained is another of Tarantino’s romanticised rewritings of history. Putting emphasis on the underdog, and for once giving them all the power, he’s like a big child playing with his toys, and ensuring the good guys come out on top for a change. It has a remarkable dinner table sequence featuring Leonardo DiCaprio, and Jamie Foxx is on scintillating form – but regrettably the film doesn’t quite know when to end. There are a few moments where you want to scream FINISH as it would feel so perfect, and yet it just carries on going, even to a point where the director puts himself in the film with a bizarre cameo (is he supposed to be Australian?) And for that reason, this just misses out on our top five, because otherwise it’s truly excellent. 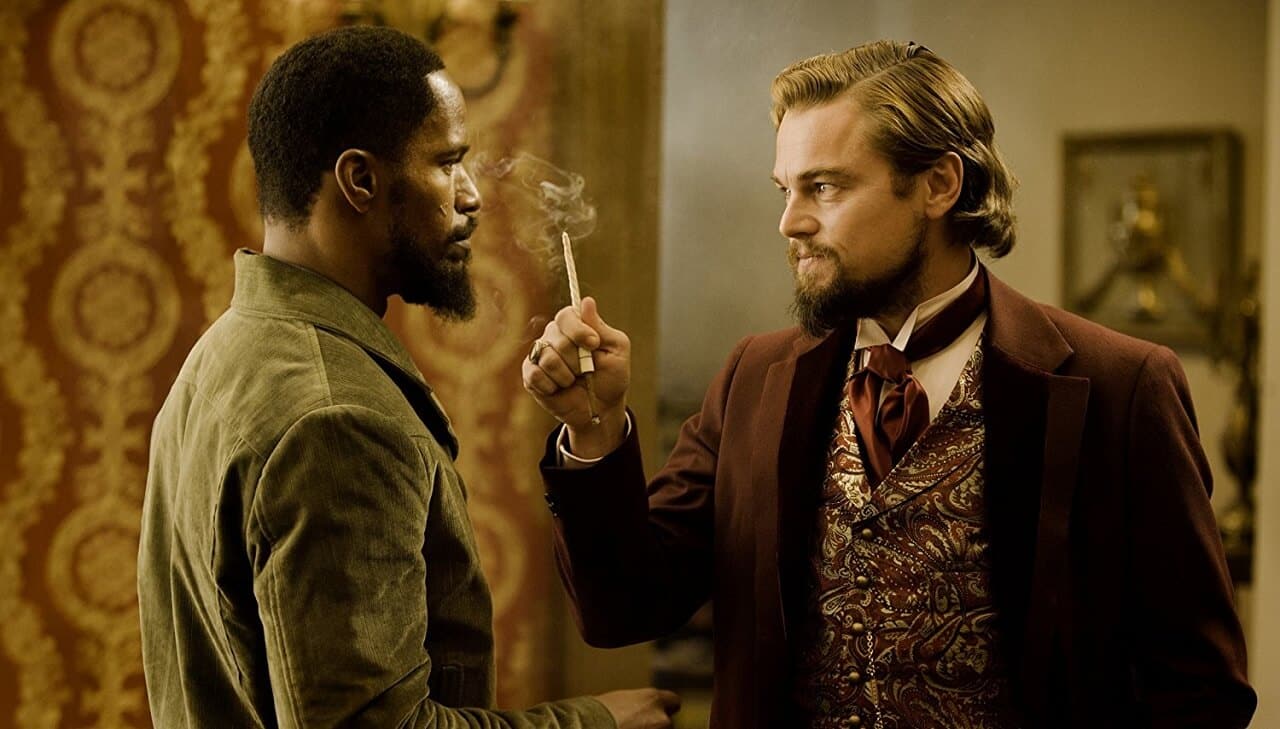 Reservoir Dogs. This may not be our favourite Tarantino but in many ways remains his most important movie, for it’s what introduced him to the world, and allowed him to cement his indelible, distinctive sensibilities as a filmmaker, and really show off what he can offer. It’s iconic in many ways, the suits, the names, the dialogue, it’s a film that has become entrenched in cinematic history, with so many teenagers around the world with the poster hanging on their bedroom wall. And we knew, in that Stuck in the Middle With You scene, that he was going to take risks, to subvert expectations. And since then he’s done all of that and then some.

Inglorious Basterds. This was the first of Tarantino’s work where he started to reach into history and rewrite it as he saw fit. In this instance it was the Second World War that he focuses on, and the rise of Nazism across Europe. The one downside to this film is its lack of linearity, it’s a film made up of moments more than a structured story that seamlessly flows. But the moments are special, be it the the sequence on the farm at the beginning, or the one in the cellar with Michael Fassbender, it’s intensely compelling and has you on the edge of your seat every single time, with Christoph Waltz at his very best as the primary antagonist Hans Landa. Plus, bonus points for shooting Hitler in the face.

Once Upon a Time in Hollywood. Though another historical retelling – featuring names and faces we recognise, from Bruce Lee to Roman Polanski, this latest film from Tarantino is like the complete opposite to Inglorious Basterds, for while that is made up on gripping moments, this tells much more of a complete story and in such a languid way. Unlike some of his more suspenseful features, this adopts the spirit of the time, set in Hollywood in the 1960s, and we drift through the story like we’re floating in the air, in what is a true ode to the golden age of cinema. It’s a love letter to the industry, and features Brad Pitt and Leonardo DiCaprio (in full farce mode) on top form. It’s a film about grief and love and everything in between. Considering this director’s oeuvre, for his latest to have jumped right up into the top three tells you just how special a pice of filmmaking this is.

Jackie Brown. As good as his new one is, it will take some doing to displace either of our top two, which we feel sit firmly ahead of the rest, and to be honest it was difficult even deciding between them. But we had to (that’s literally the point of the article) and we’ve decided that Jackie Brown takes the second spot – no less thanks to the incredible soundtrack. Working with De Niro, it proves to be a match made in heaven, and the actor captures the essence of the film; which is slow and unhurried, and could easily be mistaken for being too convoluted, with a bit of ‘get to the point’ feel about it all. But on every watch you appreciate its genius, a film that is a sum of its parts, and Pam Grier and Robert Forster are just terrific in the leading roles. Then there’s Samuel L. Jackson, and while it may not be out favourite ever use of the word ‘muthafucka’ to come out of his lips, he claims that when he’s in the car with De Niro, just getting ready to kill him, when he says it there at that precise moment, it’s his favourite ever use of it. And who are we to argue?

Pulp Fiction. So Pulp Fiction takes top spot. It’s the sort of film if you’re flicking through your channels on the telly, and you come across it, you just can’t help but watch it through to the end, no matter what point you found it, and no matter what you initially had planned for your evening. It’s been watched so often and entered into the social conscious so greatly, that it’s easy to feel slightly bored of Pulp Fiction, like a classic song you’ve listened to far too frequently. But when you actually sit back and just appreciate all of its components; the dialogue, the music, the dancing, the drugs, the character development, the aesthetic, the hairstyles, the violence, Christopher Walken’s cameo, it’s hard not to consider this anything other than a sheer masterpiece. Will he ever top it? We very much doubt that – no matter what or how good his tenth film may be (please don’t be Star Trek). 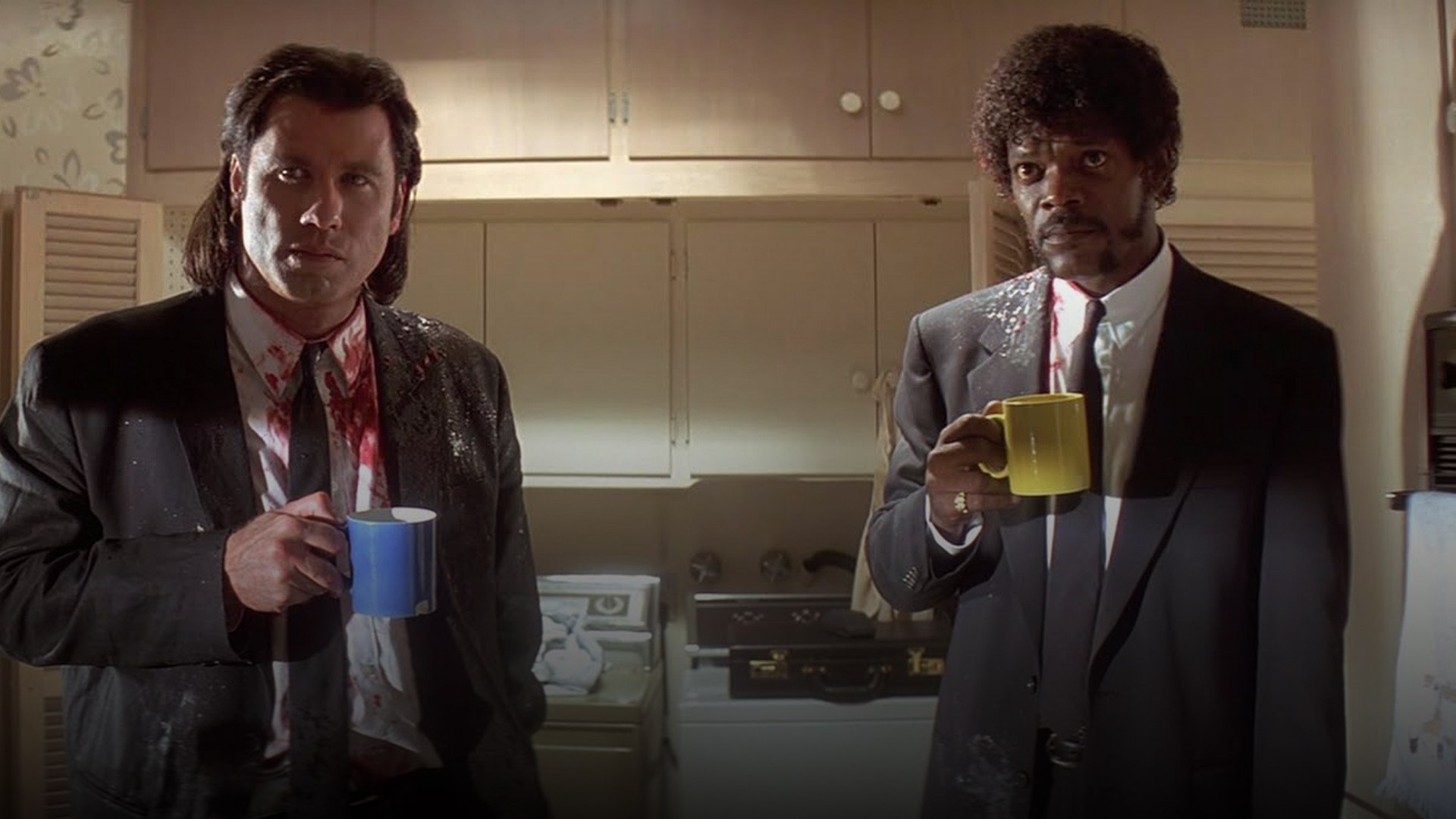 Once Upon a Time in Hollywood is out in cinemas now