One of a series of films attempting to give a cinematic voice to the post-grunge Generation X scene, S.F.W. (So Fucking What?) hardly registered on the cultural landscape when released in 1994. This was around the time when Reality Bites – the more audience-friendly spin on the mini-phenomenon – was bringing in the crowds, but it wasn’t just cinemagoers who were indifferent to the film.

Roger Ebert was pretty unforgiving in his review, claiming the film qualified «Forrest Gump for a genius grant». It currently resides on Rotten Tomatoes with a 12% rating. Undoubtedly an uneven film, S.F.W is also an unfairly maligned one. Loose comparisons were made with Oliver Stone’s Natural Born Killers around the time of its initial release, and both films do share an irritating trait in their self-conscious need to be categorised under the ‘cult cinema’ banner. But underneath S.F.W’s subversive posturing lies a smart depiction of misplaced hero worship. The film’s Big Brother-style rolling ‘reality’ content and YouTube megastar/cult of non-celebrity premise looks increasingly prescient in hindsight.

Director Jefery Levy uses a series of flashbacks to shape his narrative and it’s one of these which open the film where we first encounter the filthy and disheveled protagonist Cliff Spab (the eternally underrated Stephen Dorff). He’s addressing a camera on the 36th and final day of being held against his will, alongside two other surviving hostages (Jack Noseworthy and a young Reese Witherspoon) in a 7-Eleven-type supermarket called Fun Stop. The kidnapper’s motives are left ambiguous to the audience, but their strict stipulation is that every piece of footage they shoot of their captors must be broadcast live, worldwide and uncut. The nightmarish situation ends in a bloody and tragic end, and when Spab subsequently wakes up in a in a hospital bed post-incarceration, he discovers he has become the chosen mouthpiece for the jilted generation and his rebellious stance (S.F.W. So Fucking What?) has been wholeheartedly embraced by the young masses.

Perhaps owing to the director’s inexperience as a filmmaker, S.F.W does suffer from an inconsistency of tone on occasion, as it oscillates between broad satire – the grotesque US tabloid culture being a particularly easy target – and more thoughtful and introspective moments. A young, pre-stardom Tobey Maguire features briefly as one half of a Beavis and Butthead-like airheads, tipping things dangerously close to outright farce. Similarly, an elderly gun-toting hippy couple whom Spab briefly hitches a ride with are another example of the director’s sometimes uneven handle on the material. The film works much better when Spab is in contemplative mode, and the night he spends with Joe’s grieving older sister (Joey Lauren Adams), who he has a history with, offers a welcome counterpoint to the broader stuff.

Given the film’s central theme, it may come as little surprise to learn that Levy actually screened it for Kurt Cobain, a figure who was very much the real-world counterpart of Spab in regards to his unease at being appointed a sudden spokesperson for the 90s disfranchised youth (the director has claimed the Nirvana frontman “really connected” with the material). While S.F.W is unlikely to be mentioned in the same breath as the teen nihilism works of Greg Araki from that era, or even its cinematic slacker contemporaries, it remains a flawed but intermittently fascinating portrayal of an outsider trying to fathom his imposed celebrity. Spab himself would probably offer up his titular motto if he was told the film failed to connect with audiences upon release, and it’s difficult not to agree with him. 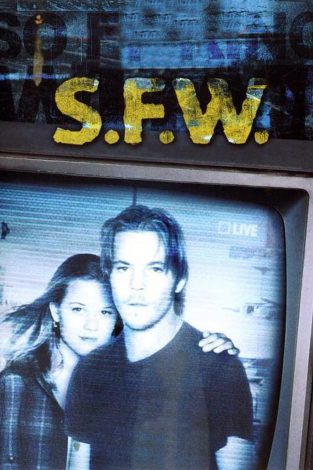