2018 marked the 30th anniversary of Mike Nichols’ Working Girl. Nichols has often placed women at the forefront of his films, most notably Silkwood (1983) and Postcards from the Edge (1990). So it’s fair to say that Nichols is interested in telling women’s stories. The question is: has Working Girl aged well or does it look like a ‘celebration’ of womanhood as anachronistic as its giant shoulder pads? The answer, confusingly, is both.

The titular Working Girl is Tess McGill (Melanie Griffith), a working-class lass who earned a degree at night school and is a secretary on Wall Street. Her best mate is Cyn (Joan Cusack), a childhood pal. They have big hair and big shoulder pads, but Tess also has big plans. When she starts working for top boss Katharine Parker (Sigourney Weaver), Tess grasps a unique opportunity. When Katharine breaks a leg, it’s off with the hair and away with the shoulder pads as Tess takes on her boss’s persona to get her brilliant ideas noticed. Helping her achieve this is Katharine’s erstwhile beau, Jack Trainer (Harrison Ford).

On the face of it, we are rooting for Tess. She has had unfair setbacks due to her class and her gender. She’s taken advantage of by her filching boss. Katharine is a prize bitch, but who’s to say what she’s had to put up with to get where she is? Maybe Katharine is a bitch as that was the only way to succeed and protect herself. And stealing someone’s identity (and fabulous wardrobe) doesn’t seem the most noble way to get ahead in business, or anywhere.

Then there are the gratuitous scenes of both Katharine and Tess in their underwear (or Katharine’s underwear, to be more precise): we see Katharine decked out in corset and stockings sprawled on a bed and we see Tess vacuuming in undies and heels. The title evokes an image of prostitutes rather than businesswomen and there are a couple of unsavoury comments. When Jack and Tess meet, she says: “I have a head for business and a body for sin”, which leads you to ponder whether Tess thinks only people with great bodies are worthy of great sex. There is the body-shaming quote, again courtesy of Tess, when she tells Katharine: “Get your bony ass out of my sight!”, the insult repeated with relish by Oren Trask (Philip Bosco).

I also have issues with Griffith’s breathless, girly voice and she is further infantilised when Jack sends her to work with a schoolchild’s lunchbox. The good news is that there are some great comedic moments. Cusack shines as the big-haired loudmouth friend (“Can I get you anything? Coffee? Tea? Me?”). Sigourney Weaver makes a great comedy villain and is a scene-stealing joy to watch. In fact, all three women were nominated for Oscars. Griffith and Ford create a whiff of old-school Hollywood chemistry. There are nice cameos from Alec Baldwin as Tess’s boyfriend and from Kevin Spacey as businessman and sleaze ball Bob Speck.

It’s just a shame that in a film about female, working-class empowerment, it had to come at the expense of ethics and with another woman as the baddy. So, watch this film with rose-tinted spectacles, enjoying the good parts and remembering it was made when #MeToo and Time’s Up were not even a twinkle in Hollywood’s eye. 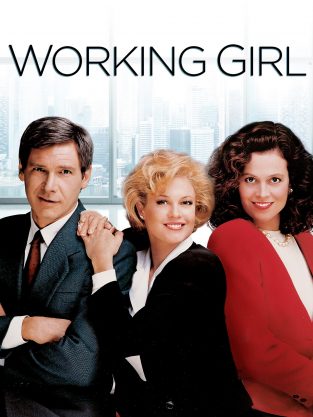