With the recent news that the next instalment of everyone’s favourite globe-trotting archaeologist has been pushed back further to a 2020 release date, what better time to look back at what was the most maligned entry in the adventures of Indiana Jones until 2008’s notorious Kingdom of the Crystal Skull reared its ugly, fridge-nuking head. Even now The Temple of Doom is still looked upon as a lesser film of the series by many. Through the years accusations of cultural ignorance and racial insensitivity have been levelled at it, due in part to the idea that 1930s India is a savage and uncivilised nation – not helped by the infamous Pankot Palace gross-out dinner scene. Even Spielberg himself said of the film around the release of the altogether lighter follow-up Last Crusade, “It was too dark, too subterranean, and much too horrific. I thought it out-poltered ‘Poltergeist.’ There’s not an ounce of my own personal feeling in ‘Temple of Doom.’”

In fact, US parent’s objections to the film’s gory content back in 1984 spurred Spielberg on to appeal to the American film ratings board that a new certificate should be created to accommodate similar material, and thus was born the PG-13 (even back then, the director had serious sway over the industry). All those concerned adult cinemagoers must have made a trip to the cinema toilet three years earlier during Raiders of the Lost Ark’s face-melting denouement. It’s true that Temple of Doom is undeniably a departure from the superior first film. It leans too heavily on the action and forced humour (Kate Capshaw’s shrill damsel in distress is hard work) and there’s barely any scenes of Indiana’s archaeological ingenuity or knowledge being put to the test. There was also the notion expressed by some critics of the film that sending Indy on the hunt for a fictitious ‘treasure’ somehow cheapened the experience (let’s not forget, Spielberg actually went back to the biblical well for Crusade’s McGuffin).

While some of Temple of Doom’s issue might keep it off the top spot – or indeed even second place – those fans who came of age around the time of the film’s release tend to have a very different opinion of it. But even if the film didn’t connect in the same way as Raiders – like the Bond series, opinions and preferences can sometimes vary due to fan’s ages – the fact remains that the film is still loaded with some of the greatest moment from the franchise. The opening scene where Spielberg goes full Busby Berkeley and we’re suddenly transported to a lavishly choreographed dance routine is both a beautiful showstopping homage to the musicals of yesteryears and a glorious acknowledgement of the transcendent power of cinema itself.

And let’s not forget Indy’s relationship with Short Round. Spielberg forges a father/son relationship between the duo which is infinitely more touching and rewarding than Indy could muster up with his actual biological offspring in Crystal Skull. The scene towards the end of the film as Short Round manages to break Indy out of the evil trance he’s in and the two share a reassuring hug is a deeply moving moment and reaffirms what a great father figure the character is to both his onscreen companion and the audience. Forget about the stupid, logic-defying inflatable life raft-cum-parachute escape, and the aforementioned dining scene which, quite honestly, is more immature than offensive in hindsight. While Indiana Jones and the Temple of Doom is not without flaws, it’s an entertaining roller coaster ride (literally, during the mineshaft pursuit) which is undeniably sprinkled with a little of the director’s eighties gold dust, even if he wished he’d spread it elsewhere now. 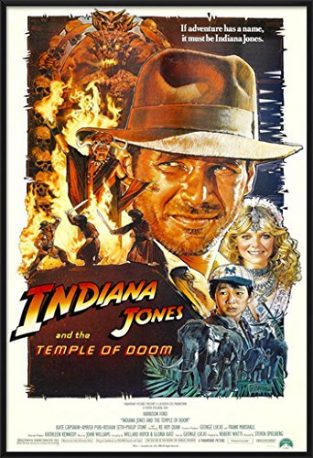 Indiana Jones and The Temple of Doom