The recent release of visually-bombastic dystopian gamer flick Ready Player One marked the 31st directorial venture of one Steven Spielberg. It’s an impressive number of feature films for any filmmaker to have under his belt, and there’s certainly a fair amount of classic included in there, none of which anyone needs reminded of. However, like many of his own cinematic contemporaries, some of Spielberg’s work on occasion hasn’t chimed quite as loudly with audiences as others. One of those, 1989’s Always, failed to make much of an impression with fans and critics alike upon release.

The legendary Roger Ebert called it the director’s “weakest film since his comedy 1941” and others complained at the time that Always fell victim to that kind of overly-saccharine, manipulative approach which Spielberg detractors jump on when shredding his work. The film itself is a remake of 40’s romantic melodrama A Guy Named Joe, and it’s clear from the outset that Spielberg is also making use of those similarly broad emotional brushstrokes from that era of filmmaking in his version. Shifting the action from WWII to a contemporary setting, past Spielberg muse Richard Dreyfuss inhabits the role Spencer Tracy originated, as daredevil aerial firefighter Pete Sandich.

Pete’s reckless attitude exasperates his loving girlfriend Dorinda (Holly Hunter) and best pal Al (John Goodman), the latter of whom suggests he retires from his perilous job to work as a training instructor instead. Succumbing to the dreaded ‘one last mission’ fate (Spielberg thoroughly embraces the clichés of the genre) Pete is killed whilst engaged in a tricky airborne manoeuvre to save Al’s fire-ridden plane. But Pete isn’t through with the real world yet, and finds himself with another purpose in the afterlife when a kindly apparition in white (in a lovely casting nod, played by the late Audrey Hepburn) suggests he embarks upon on a kind of spiritual pay it forward.

It’s isn’t hard to guess where Pete’s quest will take him before he’s allowed access to those pearly gates, but this isn’t a film trying to stay one step ahead of a hip, knowing audience. It’s a purposely unabashed old-fashioned weepie, and if you can let your cynical guard down, tears will undoubtedly be jerked. Dreyfuss is on fine form, but Hunter and Goodman are equally solid here, particularly as grief-stricken individuals struggling to move on during the second half of the film.

Replete with the kind of charming little cinematic touches that the director does so well – the sequence where Pete’s grubby, oil-stained colleagues are all enthusiastically clambering for a towel and a wash to dance with the immaculately-dressed Dorinda is classic Spielbergian visual fare – Always is a light, decidedly low-key entry into the iconic director’s oeuvre. It’s certainly well worth a revisit, particularly if you’re in the mood for a gentle homage to the Hollywood of yesteryears. 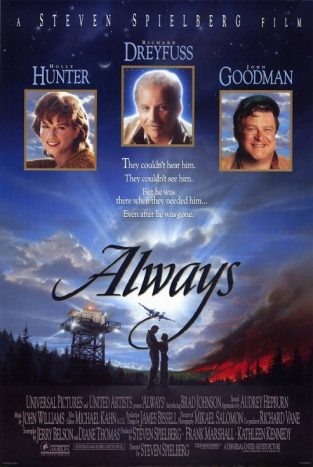