Twenty years ago Stanley Kubrick died of a heart attack in his sleep. He was seventy years old. He had just completed, but was still tinkering with, Eyes Wide Shut. In some ways, it was a perfect ending. Something like Shakespeare’s The Tempest and Prospero’s renunciation of his rough magic, Kubrick seemed – even with the title – to be bidding his farewell to cinema and the world. 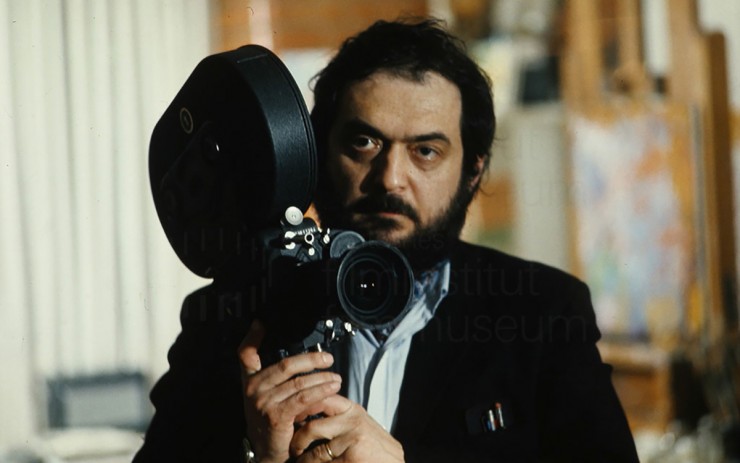 EARLY DAYS – From his beginnings as a precocious young photographer snagging work with Look while playing chess for quarters in Washington Square, Kubrick exhibited a confidence and ambition way beyond his years. Partnering up with James Harris, Kubrick made his first breakthrough with the classy noir The Killing co-scripted by cult novelist Jim Thompson. From this point on Kubrick’s career moves in leaps and bounds with Paths of Glory, an raging anti-war movie a strong first contender for masterpiece status.

Kirk Douglas would hire Kubrick to direct sword and sandal epic Spartacus, before the director settled in England and decided that hew as going to play the Hollywood game his way. There followed a sterling version of Vladimir Nabokov’s unfilmable Lolita. From this point on the director began to burnish his reclusive genius reputation and the films that came out each represented genre-defining masterpieces.

THE GLORY YEARS – From the cold war satire Dr. Strangelove to the psychodrama of Eyes Wide Shut, Kubrick’s film were characterised by a bold visual style, meticulous detail, arresting performances and a use of music – almost always found music – that redefined the way film makers thought about soundtracks. Each of his works is based on an existing novel with the exception of 2001: a Space Odyssey with the film being co-written at the same time as the Arthur C. Clarke novel, but despite the literary of his work, Kubrick has created some of the purest in cinematic storytelling. Look at the awe-inspiring largely dialogue-free sequences from 2001, or the painterly melancholy of Barry Lyndon. The Shining surpasses Stephen King’s ho-hum haunted house tale to become a beguiling poem on snow, family and madness.

Despite the diverse genres in which he worked from period pieces and war films to science fiction and horror, Kubrick managed to create a consistent aesthetic of symmetrical framing and smooth pans as well as a coherent  philosophy. For Kubrick, humanity was alone in a godless and indifferent universe, yearning freedom but forever trapped by their own machinations. As Joker says in Full Metal Jacket, his characters were ‘in a world of shit’ with little choice but to march on to their destiny, whether that means a suicidal dawn attack in Paths of Glory, or being trapped in a photograph celebrating July 4th, 1921 for eternity in The Shining.

Perhaps this is why Kubrick’s  most fascinating characters are his villains. Whether it’s the monstrous Alex of A Clockwork Orange or the Gunnery Sergeant from Full Metal Jacket or Jack Torrance, there are so many forceful characters and marvellous performances. Even his heroes have a tendency towards the rascal – Tom Cruise’s dubious doctor for instance or Ryan O’Neal’s ambitious Irish rogue in Barry Lyndon. Strong female characters unfortunately are few and far between. Nicole Kidman does her best to correct this in Kubrick’s final film. And one of the most beguiling elements of Eyes Wide Shut is that it ends with such an affirmative  conclusion. She gets the last word.

THE LEGACY – Having left us on his death with a list of projects abandoned or only just begun, Kubrick’s legacy began to be felt immediately with Steven Spielberg’s film A.I. Artificial Intelligence, a screenplay Kubrick had been working on for years with Spielberg. Although greeted with ambivalence upon its release, this strange and frequently brilliant retelling of Pinocchio deserves a re-watch. My further thoughts can be found here. Less directly, film makers as diverse as Yorgos Lanthimos, Paul Thomas Anderson, Jonathan Glazer,  Alfonso Cuarón, Gaspar Noé and Alejandro Inarritu have been massively influenced by Kubrick. There has also been a series of documentaries such as Film Worker and Jon Ronson’s hilarious Kubrick’s Boxes which have sought to – in Ronson’s case literally – unpack the legend of Kubrick’s methodology and mania, his perfectionism, the take after take after take, and the cost often paid by his collaborators.

Today, Stanley Kubrick has entered popular consciousness as one of the true masters of modern cinema. His name stands for a pure cinematic aesthetic, a rare intersection between artistic seriousness and popular accessibility. Many images from his films are immediately recognisable and the films themselves continue to finds new devotees and will inspire many young new film makers to new heights.

More of The Shining