I’ll never forget watching Alien for the first time. We videotaped it when it premiered on ITV one Sunday night in the Summer of 1982. It terrified me even though we watched it in broad daylight. The creeping dread of the weird windy planet, the tragic fate of the quarrelsome crew of the Nostromo, the vile shadowy terror of the Xenomorph itself. And the chest-bursting scene was so gruesome that we didn’t dare rewind it. I would play the game on the ZX Spectrum and read the novelisation by Alan Dean Foster, who single-handedly got me into reading. It became a film I would come back to many times. Having spawned a whole franchise (actually several franchises), as well as comic books and many imitations, of which the best was another masterpiece: John Carpenter’s The Thing, Ridley Scott’s 1979 movie remains a classic of two genres, a lesson for all marketing campaigns, a wonder of design and a thrilling piece of absolute cinema.

At its heart, Alien is a very simple haunted house story. The crew of the Nostromo are awoken from hyper-sleep to answer a distress signal from an unexplored planet. One of the crew – Kane (John Hurt) – is attacked by a creature which sticks to his face. He is returned to the ship where the creature on his face dies and all is well until an alien erupts from Kane’s chest and the crew must hunt the rapidly growing monster, one by one dying in the process. For original writer Dan O’Bannon the film was ‘Jaws in Space‘; for British director Ridley Scott it was ‘Texas Chainsaw Massacre in Space’. But with a rare originality of design by Swiss artist HR Giger, it soon morphed – like the Alien itself – into its own deadly thing. 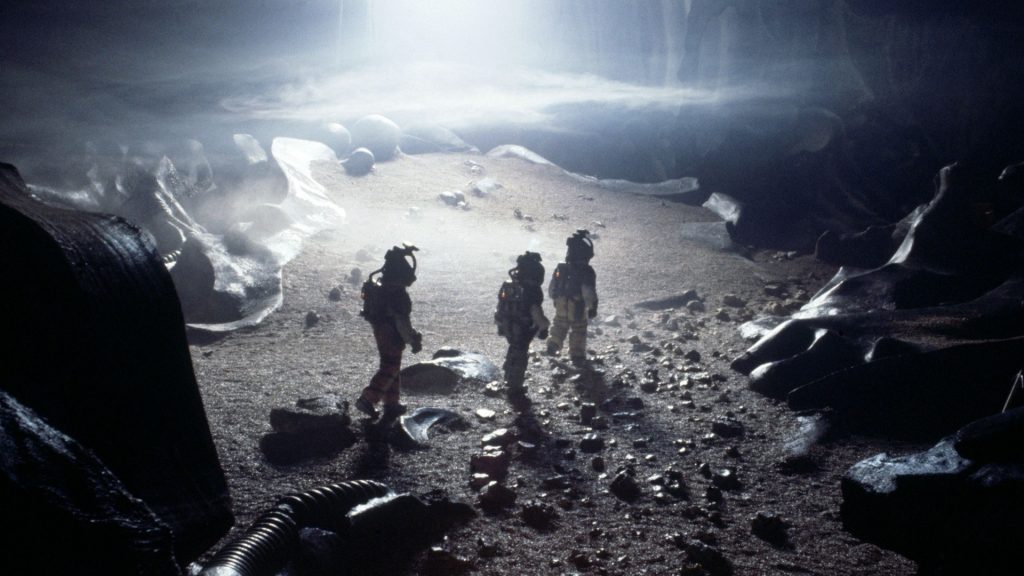 THE NOSTROMO – The first genius move was to create an utterly credible world on board the Nostromo. This is a working environment with its own divisions and tensions. The engine room of Parker (Yaphet Koto) and Brett (Harry Dean Stanton) is dark and industrial compared to the hi-tech flight deck where Ripley (Sigourney Weaver) and Lambert (Veronica Cartwright from the Texas Chainsaw Massacre) work and the almost religious retreat of the computer room. The crew bicker about bonuses and enjoy running jokes. They even have a cat – ‘here Jonsey! Here kitty!’ This is a familiar environment, which nonetheless isn’t home. All of this is established in a beautiful slow, sleepily paced opening, as the crew wake up and go about their business unaware that they are about to embark on a horrific detour. An exemplary cast of Anglo-American talent – Ian Holm and Tom Skerritt round out the crew – all play their roles with an understated naturalism. There are no heroics and throughout the film the focus is very simple: survival. 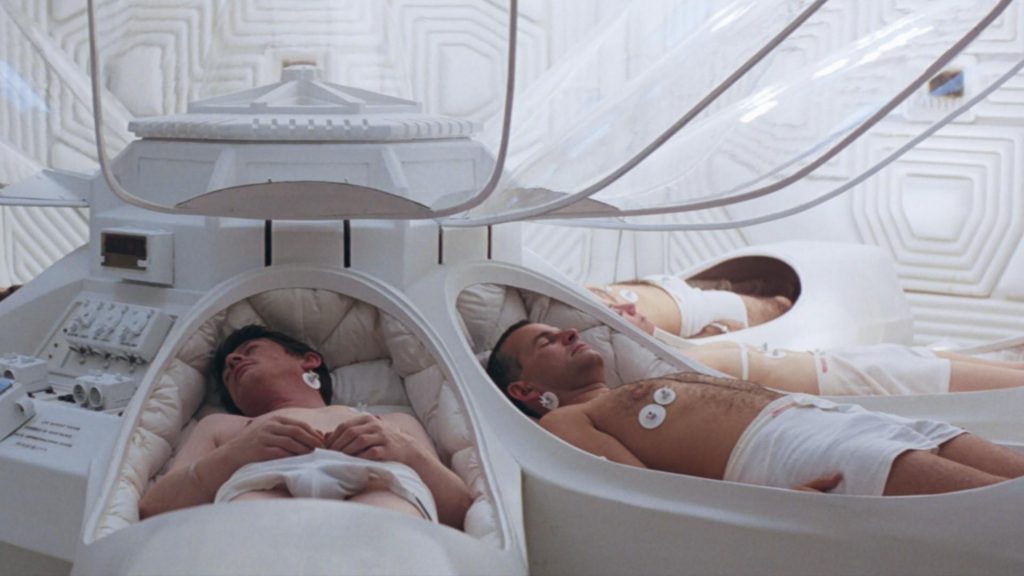 THE ALIEN – Of course, a monster film can only be as good as its monster and the titular alien was a shockingly original concept: the strange dolphin head, the dripping maw and the jutting penis with teeth were at once new and familiar. A nightmare we always knew was waiting for us. The face-hugger that orally rapes poor Kane also probes primal fears of suffocation and violation. Audiences had already been primed by an iconic poster with a malevolently grinning egg which perfectly set the tone without revealing anything. 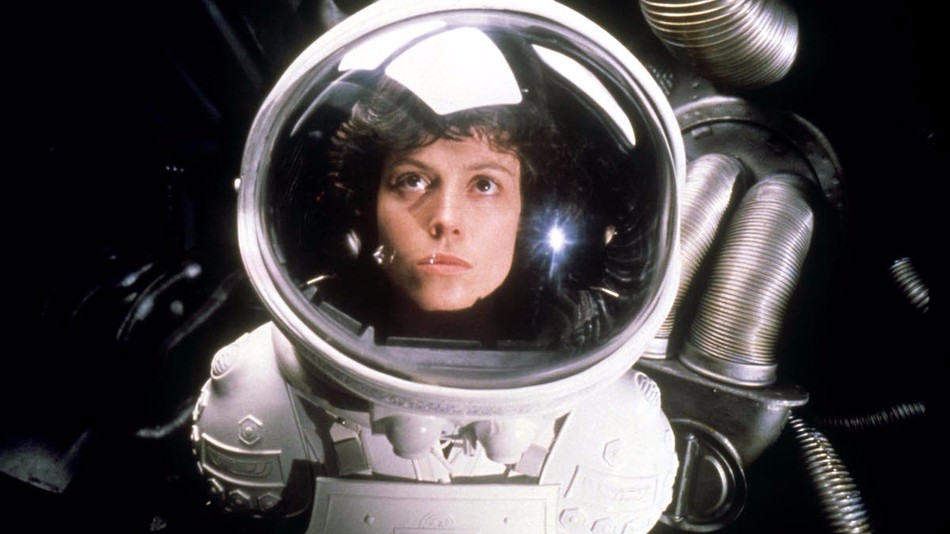 RIPLEY – Warrant Officer Ellen Ripley launched Sigourney Weaver into stardom and provided her with an enduring character to whom she has returned in three sequels of differing quality. And yet watching Alien for the first time, it is unclear who is going to survive and although she shows leadership in opposing Kane’s return to the ship, her survival is by no means a foregone conclusion. Ripley Scott even suggested she should have her head bitten off at the end and the Alien then imitate her voice in the final log entry. Having said that, Weaver is extraordinary in the film – a stoic and noble presence amidst the madness and terror – and something of a feminist icon, a trait that will become increasingly explicit as the franchise wore on. 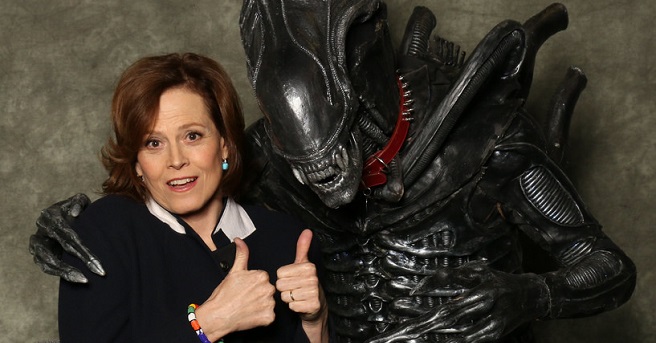 40th ANNIVERSARY – Rewatching Alien at 40, I cannot help but be amazed by how strongly this film holds up. With its oft-imitated never equalled look, it is less dated than Scott’s prequel Prometheus already is. Despite its B-Movie premise, there’s no camp to the film. It has humor and dark wit, but it is utterly straight and takes its situation and the characters involved entirely seriously. This is part of its enduring power. No matter how many times I’ve seen it, this 1979 movie remains shocking and new – in a word: Alien.