Veteran actor Anil Kapoor on Saturday successfully completed his 35 years in the film industry.The actor made his debut in the industry with Woh Saat Din in 1983. The Dil Dhadakne Do star took to Twitter share his feelings about the same and wrote, “I am so lucky to have experienced so much and received so much love every day. Blessed to be living my dream.” He also uploaded a picture of the road map of his journey and wrote alongside, “What a journey it has been! So many characters, so many opportunities to grow and all the endless memories. I don’t really remember the life I had before I entered the movies because I truly started living on the silver screen…Blessed to be living my dream! #35yearsandCounting.” On the work front, Kapoor was last seen in Race 3, with Salman Khan. He will also be seen with Aishwarya Rai Bachchan and Rajkummar Rao in Fanne Khan. 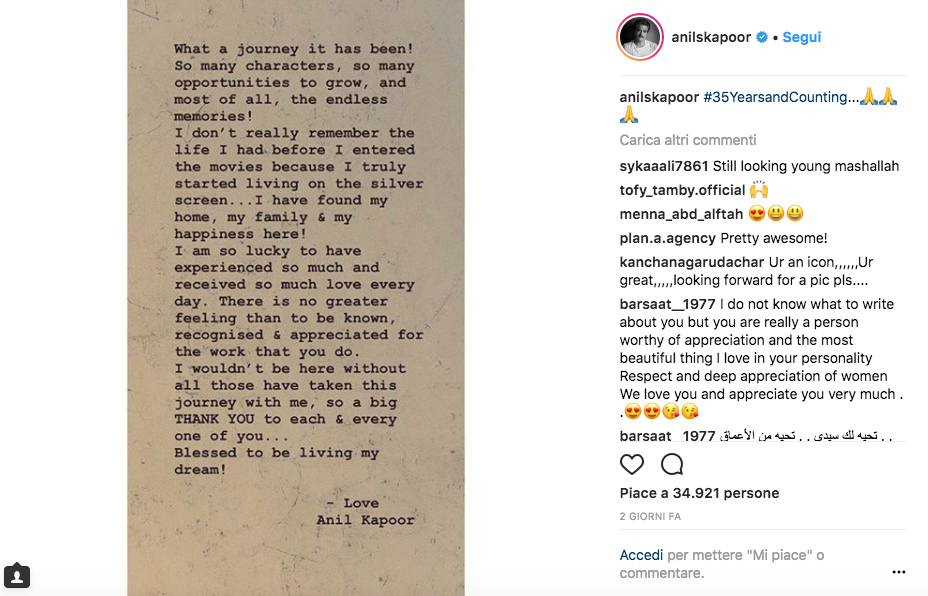 Later, Anil Kapoor’s wife Sunita Kapoor also shared the post on her timeline and wrote: “Blessed with the best 35 amazing years and the best is yet to come.” Needless to say, the post garnered a lot of love from Anil Kapoor’s fans and members of the Kapoor clan. Maheep Kapoor also gave a shout out to Anil Kapoor with multiple thumbs-up emoticons. Anil Kapoor, who made his acting debut in a cameo appearance in 1979’s Hamare Tumhare, talked about his journey in Bollywood and told news agency PTI: “The journey here started with Woh Saat Din, that released in 1983 on June 23. I started getting work, was appreciated and I became successful. As they say trade-able, sale-able commodity, there were big films, people putting money on me.”

He added: “There are certain things that still connect with the audience like jhakaas or the popular song Aye Jee, Oo Jee or the film Mr India. It feels great that my work has left an impact on the audiences. I feel lucky and fortunate.” In a career span of 35 years, Anil Kapoor has delivered many hits such as Ram Lakhan, Mr India, Laadla, Beta and Nayak, to name a few. He married designer Sunita Kapoor in 1984 and they have three kids, actress Sonam Kapoor, producer Rhea Kapoor and Harshvardhan Kapoor, who is also an actor.