As the years have gone by, the Fast & Furious franchise has become less about the art of illegal street racing, and more about overstated stunts and ambitious set-pieces, where the narrative goes far and beyond the simplicity of the initial endeavour, and into the more conventional blockbuster trope of our protagonists effectively having to save the world. This tonal (and financial) shift has culminated in the most bombastic and absurd entry of them all, in the spin-off Hobbs & Shaw.

Not for the more die-hard loyalists (we know you’re out there) this isn’t really a Fast & Furious film at all, especially given the two titular characters are not even part of the original ensemble that we have come to associate so closely with the F&F series. Instead, we’re bringing together two of the more recent recruits in the form of Luke Hobbs (Dwayne Johnson) and Deckard Shaw (Jason Statham) as the friends-cum-enemies have to find a way to get along if they’re going to *checks notes* save the world all over again.

In this instance the threat comes courtesy of Brixton Lore, a genetically enhanced man who in many respects is a supervillain, removing this film even further from reality and entering into the realm of the superhero genre. With a mindset not too dissimilar to that of Thanos’s, he intends to wipe out much of the planet, but to do so, he needs to get hold of the virus, which is being carried by none other than Shaw’s estranged sister Hattie (Vanessa Kirby). This naturally draws him into the battle, vying to protect his sibling – while Hobbs remains interested because, well, we guess he just likes saving the world. But they must put their differences aside and work together, and that, despite all of the monumental challenges that lie ahead, seems to be the hardest one to overcome.

First and foremost, this film is incredibly good fun. If you think Hobbs & Shaw is the sort of film you’d enjoy, it’s likely to be the sort of film you’ll enjoy; it knows its audiences and plays up to them in an affectionate manner. It’s unashamedly entertaining, fast-paced from start to finish with little actual care for character development or narrative, instead just tying together a convoluted and contrived storyline together by needlessly destructive sequences that feature, in fairness, some hugely ambitious set-pieces that are good fun to invest in. Some of which, we should add, are probably about as impressive as any you’ll see this year.

The problem is, the film gets too silly. Now its such a fine line and you could argue that the more absurd it is the better, but it almost parodies itself and the commitment to entertainment is so unwavering, we lose sight a little bit about cinematic constructs and the film is actually a bit of a mess. And of course the film cares so little for reality, but at the same time there are plot-holes and inconsistencies that do grate on the viewer. I mean for starters, there are flashbacks to the childhood between Deckard Shaw and his sister Hattie as children. Now, we don’t wish to be pedantic but Statham is old enough to be Kirby’s father.

She is the star of the show however, and while Elba does a fine job as the villain – and vitally someone you feel is formidable and impossible to overcome – it’s the British actress who truly steals the show, so much so she can feel somewhat hard done by that she hasn’t managed to get her name in the title. Though suppose Hobbs and Shaw and Hattie doesn’t quite have the same ring to it.

But ultimately it just gets a little tedious, and the runtime is simply too long, as for a film that is best described as being a ‘popcorn’ movie, it’s at a length where by the time you reach the second act you’ve finished all of your snacks. Director David Leitch has thrown his hat into the ring for the forthcoming Blade reboot, and while he seems a decent choice, if he’s going to get involved in the MCU he’s going to have to just fine-tune his style a little, as while this is an engaging blockbuster, it’s a little sprawling and hackneyed.

Fast & Furious: Hobbs & Shaw is out in cinemas now 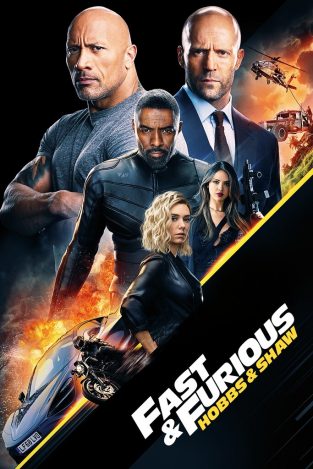