Our pick of the week may come as something of a surprise, especially considering it’s a strong week for theatrical releases. But we’ve opted for The Angry Birds Movie 2. Bear with us. Honestly, it’s brilliant. Yes that’s right the sequel nobody was quite sure they wanted, but are now thrilled has arrived, deviates away even further from the confines of the original smart phone app this franchise is based upon, to bring us what can only be described as one of – if not the funniest film of the year so far. Directed by Thurop Van Orman, here’s a film that thrives in irreverence; it’s an absurd, slapstick comedy that has some sequences that will have you almost crying with laughter – with one in particular, taking place in a public toilet, that made our sides hurt.

Of course it’s a family animation and with that comes a slight pressure to project a message at a young, impressionable crowd and the film delivers on that front, as the notion of friendship is prevalent, the idea that it doesn’t matter who you, or where you come from, there’s a place for you in the world, and our differences make us stronger. But that’s a side-not, a mere contributing factor to the humour, as an unrelenting caper, an adventure flick that sees our heroes try and save the world, and do so in the clumsiest way possible. It’s borrowing from classic silent movie endeavours, the likes of Charlie Chaplin and Buster Keaton in that it’s simplistic, and reliant on physical gags (yes we know they’re birds and pigs). But it’s just so well executed, enriched by a tremendous voice cast too, with the likes of Peter Dinklage, Bill Hader, Tiffany Haddish and Josh Gad all excelling in their respective roles. Add to that Sterling K. Brown, Jason Sudeikis, Maya Rudolph, Danny McBridge, Awkwafina, Leslie Jones and Nicky Minaj – and you have an ensemble that is testament to the quality of the writing.

From animated animals to metaphorical ones, our second tip comes in the form of Sophie Hyde’s excellent drama Animals, written by the author of the novel its based upon, Emma Jane Unsworth. With a career best performance from Holliday Grainger, the film focuses in on her destructive/wonderful friendship with Alia Shawkat, in what is such an authentic depiction of modern millennial culture. It also dips into themes seldom seen in modern cinema, and one in particular that stands out, and truly enriches the narrative, is the exploration of what is a tumultuous age, as our protagonists are approaching 30. That age when you’re young enough to not care, but old enough to know better, and this really studies the complexities of such a time in our lives, and makes for a truly compelling watch.

Indian auteur Ritesh Batra also returns, and after the huge success of The Lunchbox, and subsequent move into British cinema, he returns to his homeland with an equally as charming endeavour Photograph. It’s got that same gentle, tender tone that illuminated his fantastic debut, though is a more humorous piece, though it still remains subtle. Studying the notion of romance through a unique means of communication (again) rather than it be through a packed lunch, this time it’s through a photograph, as a working class street photographer falls for a shy stranger he takes a picture of. It’s lacking that special spark that The Lunchbox carried, but still and somewhat undeniably comes from the same source – and that’s a big compliment, believe us.

Now on to something completely different, as this week also marks the release of Fast & Furious spin-off Hobbs & Shaw, bringing together the characters embodied by Dwayne Johnson and Jason Statham, to make a bombastic action flick that is absolutely mad, has some insane stunts and a ludicrous storyline. In other words, it’s exactly what you would expect from this franchise. With a narrative that is best-described as being just plain ridiculous, it matters little as the film thrives in the notion of overstatement, huge action set-pieces, slick dialogue and two dependable actors at the core. It some regards it even feels like a superhero film, especially with the robotic antagonist played by Idris Elba. But the real star of the show is Vanessa Kirby, who is so good that this could easily be called Hobbs & Shaw & Hattie. Okay, maybe that doesn’t quite have a ring to it.

Another impressive film out this week (we did say it was a strong one) is the latest from Jamie Adams, as the Welsh director teams up with Scottish rock outfit Biffy Clyro for this moving musical that studies grief, friendship and everything in between. Featuring a strong performance from the up and coming star Laura Harrier, this is a tale in some ways narrated by the songs that feature, true in style to the director’s previous work, in that its naturalistic, improvised and maintains a warmth throughout – and yet it’s entirely different to his work at the same time, far more dramatic than his preceding comedies. Though if this is anything to go by, he can move seamlessly between genres as he pleases.

And finally we have animation Charming, featuring Demi Lovato Wilmer Valderrama (oh, and John Cleese). This is a nice idea, turning the fairytale on its head and instead giving the power to the women, as this time it’s Prince Charming who needs saving, he’s the one who needs a woman to take on his traditional role, and in a current climate you can see the film’s appeal. It’s a strong concept, and there is comedy that derives from this role reversal, while also it’s somewhat self-deprecating to the conventional fairytale idea, highlighting the flaws in an affectionate way. But it struggles to truly stand out from the crowd and though the idea is nice, the execution could be better, as it just needs a shaper script – and perhaps some more gratifying animation. For a film striving to be unconventional, it frustratingly follows all of the familiar beats and tropes of the genre, that we’ve sen time, and time again. 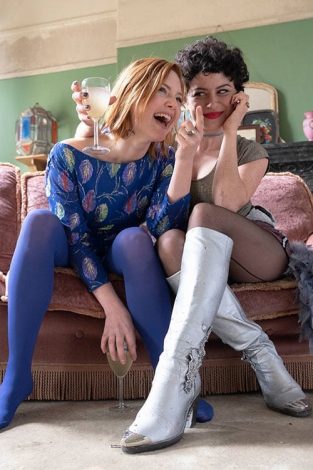