Twenty years ago, an unkempt middle-aged bowling-obsessed stoner went in pursuit of financial compensation for his soiled living room rug and thus was born a cinematic legend. Step forward, Jeffrey “The Dude” Lebowski. Even The Dude’s creators, Ethan and Joel Coen, couldn’t have envisioned their character’s longevity and unswerving popularity. Like many titles which have gone on to achieve cult status, The Big Lebowski was initially something of a box office disappointment. Scoring $15 million in the US against a $46 million budget, it was only when the film arrived on home video that it was embraced by a loving, loyal fan base and was turned into a small screen hit.

It isn’t difficult to see why a mainstream audience stayed away. It’s a very idiosyncratic film, even for The Coens. Ostensibly a comedic neo-noir, it never adheres to a tightly-plotted whodunit, instead veering off constantly into all weird and wonderful directions, with little regard to connective threads. It’s more than happy to let The Dude (Jeff Bridges) amble along with his two equally kooky buddies, volatile Vietnam vet Walter Sobchak (a blistering turn by John Goodman) and the quiet and unassuming Donny (a completely dialled down Steve Buscemi).

But in keeping with the Coen Brothers’ love for larger-than-life peripheral bit-players, into the mix are also thrown the likes of Julianne Moore as a barking mad conceptual artist and one-time love interest for The Dude, plus John Turturro’s twisted and morally objectionable bowling nemesis, Jesus Quintana – a cherished character amongst fans who is about to appear in a Turturro-directed spin-off.

All of these disparate elements would never gel were it not for the director’s skilful handling of the material. Their last offering, Hail, Caesar! has a similarly shapeless feel, but suffers in comparison, mainly due to less well-defined characters and a central protagonist who isn’t charismatic enough to carry it. This leads us to the film’s winning hand.

Bridges’ crowning, career-best turns ranks up there with the best comedic performances in cinema history. He completely inhabits the part, The Dude being someone in sync with Bridge’s own laidback, Californian persona and drawl. Some may argue the Coen’s more high-minded works like No Country For Old Men and Inside Llewyn Davis are at the very top of the ranking, but those films will never go on to spawn an annual outdoor festival (Lebowski Fest) and a religion (Dudeism).

Here’s the new trailer for the 20th Anniversary:

More of The Big Lebowski 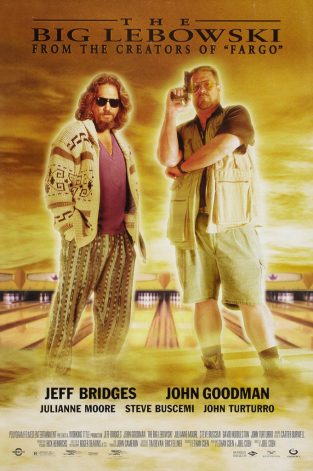