In the last few years Tom Hanks – the somewhat unlikeliest of box office champs – has seen his commercial standing slip a little. Gone are the phenomenal winnings streaks of the Gump era, where the actor had an unparalleled decade-long run of $100+ hits, from A League of Their Own, right through to Catch Me If You Can. The sole exception was 1993’s Philadelphia (still a not too shabby $77m domestic) although the actor still managed to come away with his first Oscar for his role in the film. Audiences’ tastes change over the years, as undoubtedly Hanks’ own preferences have in regards to choosing which material he wants to appear in. Having proved himself in the Hollywood arena for that lengthy period, he undoubtedly feels confident in choosing films which may not have the broadest of appeal and stuff where he doesn’t have to necessarily lean too hard on that everyman persona of his. Step forward A Hologram for the King.

Based on the 2012 Dave Eggers novel, the film is a familiar fish out of water, but director Tom Tykwer has an ace up his sleeve in the casting of beloved A-lister. The two previously collaborated on story segments within 2012’s Cloud Atlas and it’s clear from this material that a strong and assured creative bond was forged during the production of that ambitious 2012 opus. While Hanks isn’t exactly playing against type here, he certainly inhabits a role which is refreshingly removed from those real-life figures he has portrayed. For instance, when was the last time (if any) we witnessed Hanks share scenes of a deep intimacy with a female co-star?

The actor plays good-natured businessman Alan Clay, who is in limbo in Saudi Arabia whilst enduring an agonisingly long wait to see if a state-of-the-art three-dimensional teleconferencing system he’s pitched to pitch the King is a go. In the midst of a divorce which has taken a physical and emotional toll him, Clay is faced with the prospect of waiting around in the arid, alien locale, with a young taxi driver his only guide to the area. Tykwer is happy to let the initial predicament of his central figure play out at a leisurely pace, taking time to trickle in back-story and finer character detail. The cultural clash aspects are mined for good-natured humour, many of the laughs stemming from the naivety of Clay’s chauffeur (a terrific turn from newcomer Alexander Black, who appear to have yet to capitalise on his showy role here).

A Hologram for the King is a gentle and unhurried tale which takes its sweet time to develop and unfold, perhaps part of the reason why it didn’t attract much of an audience at the cinema – a total $4.2m domestic haul, it’s the lowest of Hanks career as a lead – but it’s one of those winning little films which takes the unassuming viewer by pleasant surprise. Hanks’ eminently watchable everyman persona shines as brightly, and like Cloud Atlas, there’s something intrinsically fascinating in seeing an A-lister of his status in a film which is slightly removed from – and tonally, a little more Euro-centric to – the Hollywood fare we’re accustomed to seeing him in.

Watch A Hologram for the King on CHILI

Why Young Adult Is a Much Better Movie Than You Remember 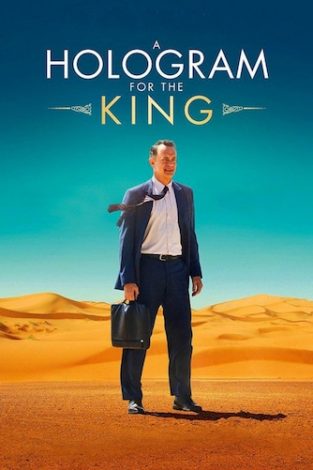 A Hologram for the King