It seems that every popular comedy performer in Hollywood is keen on showcasing their more serious actorly chops at some point in their career. Sometimes those perceived risks have resulted in either critical and commercial success (Bill Murray in Lost In Translation) or have had praise heaped upon them even if the box office tally has been less than solid (Adam Sandler in Punch-Drunk Love). Everything Must Go sits more in the latter example – a paltry $2.8M gross in the US and a decent score of 74% on Rotten Tomatoes – but it’s a film which has unfairly slipped off the cultural radar quite significantly. Will Ferrell is hardly the first actor who springs to mind as ideal casting for the role of an unemployed, beer-sozzled suburbanite whose life is in free-fall. Yet seeing the performer in this adaptation of a short story from famed US writer Raymond Carver, it’s hard to imagine anyone else bringing as much conviction and empathy to the part.

Ferrell is Nick Halsey, a veteran, borderline alcoholic salesman whom we see being fired from the company he’s been gainfully employed and indulged by for many years, as the film begins. Returning home to discover that his long-suffering spouse has not only left him, she’s also changed the locks to the garage and house and dumped all his belongings out on the front lawn in full view of everyone to see. Penniless and weary, Halsey decides to turn the garden into a lazy extension of a living room. He sleeps on a big leather recliner and manages to blag an extension lead from next door to power his mini fridge. This decidedly leftfield living arrangement arouses the curiosity of two locals, one of whom is a new neighbour from across the road (Rebecca Hall), while the other is a teenager whom Nick employs to watch over his stuff, and who ends up serving as a confident and friend to him.

The film’s first-time director Dan Rush – Everything Must Go remains his first and only credit – knows how to downplay to broader aspects of the story, and he constantly hits the right emotional beats without things ever getting too cloying. It’s a leisurely told character study which shares a commonality with the works of Tom McCarthy. The film is so laidback, it can get away with an extraneous scene where Nick visits an old high-school friend (Laura Dern) in a moment of nostalgic clarity. Above all, though, it remains a fine showcase for the previously untapped dramatic skills of its lead. Ferrell manages to elicit sympathy and an understanding of his flawed character without ever pandering to the audience. He remains highly watchable throughout and never once slides into his usual comedic shtick for effect.

It’s easy to see why this material didn’t strike a chord with Ferrell’s usual fanbase, who are much more at home with his broad, audience-pleasing deliveries. However, for anyone interested in seeing a seasoned comedy star stepping out of his comfort zone and delivering a nuanced and completely heartfelt performance, Everything Must Go is a must-see. Looking at the actor’s resume since this 2010 feature was made, it’s patently clear he hasn’t felt the need to delved back into a similar terrain or abandon the type of work which has rooted him amongst the Hollywood A-list. He’s obviously in a place where he feels most comfortable, and if Everything Must Go remains the only ostensibly non-comedic roles in ever tackles, it’s a film he should feel proud of.

Watch Everything Must Go on CHILI 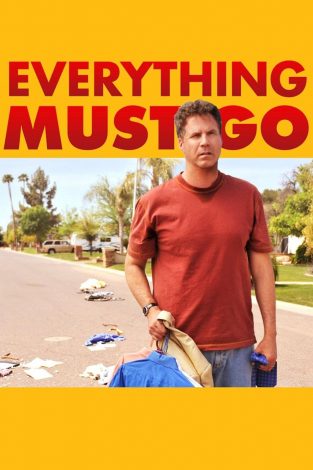