A FISTFUL OF DOLLARS | The film that began it all
Sure, Sergio Leone had been around a while. He would claim to have shot parts of the famous Ben-Hur chariot race and he’d also popped his directorial cherry with the Steve Reeves starring sword and sandals flick The Colossus of Rhodes. But it was the introduction of the Man with No Name – TV’s Clint Eastwood – and a plot more than a little borrowed from Akira Kurosawa’s samurai actioner Yojimbo – which made his own name. To be fair, the story is fairly ancient and Kurosawa himself stole it off Dashiell Hammett who nabbed it from Carlo Goldoni. It can be best described with the latter’s title The Servant with Two Masters. Eastwood is the steely-eyed gunman-for-hire who flits from Rojos to Baxters and back again, making money and shooting people and getting his hands dirty in a robbery of Mexican gold. Leone’s old school pal Ennio Morricone provides an unforgettable soundtrack and the intense and over the top Gian Marie Volante provides a fiery villain to clash with Eastwood’s inimitable cool. 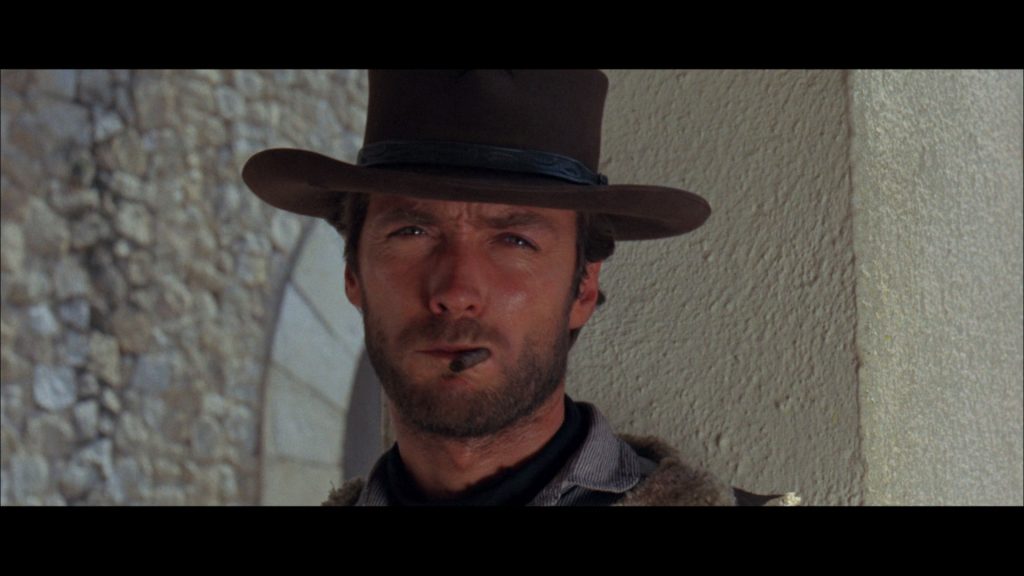 FOR A FEW DOLLARS MORE | Ambition begins to show
Although A Fistful of Dollars was still not out in the US, Leone’s first Western had been such a hit in Europe, a sequel was guaranteed. Leone expands the universe – to use today’s parlance – and even has an (unseen) cameo – the whistling gunman of the title sequence. Lee Van Cleef – a veteran actor down on his luck – was roped in to play Colonel Mortimer, an older bounty hunter who joins forces with Eastwood’s poncho-wearing, cigar-smoking, squint-eyed, whispery-voiced anti-hero. There’s a beautifully played bank sequence and Klaus Kinski turns up as a twitchy psycho hunchback, but again Volante is the main villain: a weed smoking rapist with a penchant for musical lockets. The gunfights are becoming more operatic; the music more grandiose and integral to the action (see above locket). There’s more humour – ‘having a little trouble with my math’ – and for the first time some genuine feeling in Colonel Mortimer’s backstory. 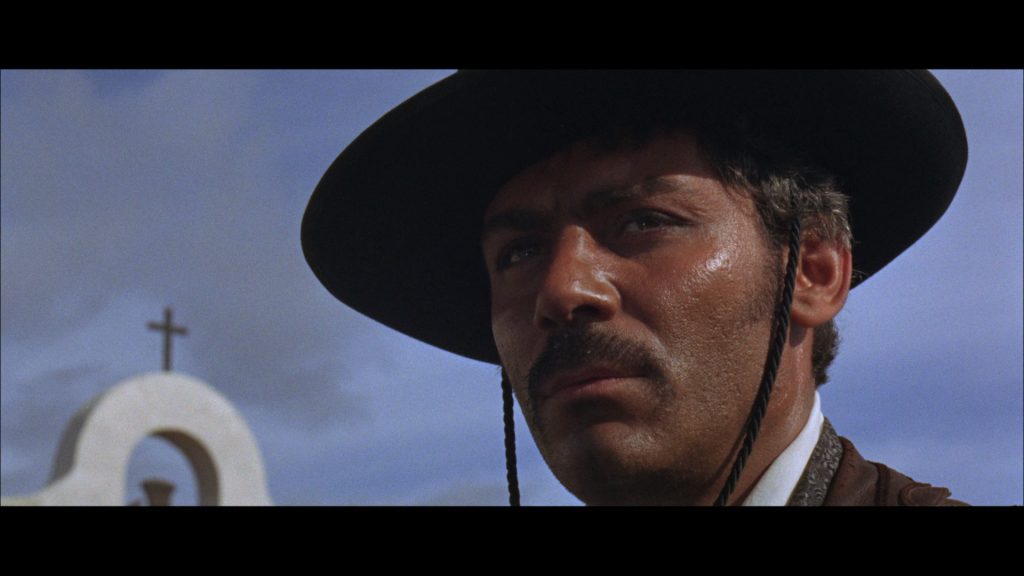 THE GOOD, THE BAD AND THE UGLY | Leone Goes Epic
With a bigger budget at his disposal, Leone expands his vision to create a brilliant three way treasure hunt for stolen money in the middle of the American Civil War. Method acting Eli Wallach joins Van Cleef (now playing the villainous Angel Eyes) and Eastwood to make the triumvirate of scoundrels whose single-minded goal is filthy lucre. Leone has now established his aesthetics that the first shot gives you it completely: long shot of a wasteland like West, interrupted by a massive close up of Al Mulloch’s ugly mug. Tit-for-tat violence and revenge make up the bulk of the movie as in the background the murderous actions of the warring armies reveal our anti-heroes to be relatively unimportant, and almost heroic in their honest larceny. The final three way duel in a cemetery is one of the most iconic action sequences in any western, elevated to pure cinema by the perfect editing and Ennio Morricone’s Ecstasy of Gold/The Trio. 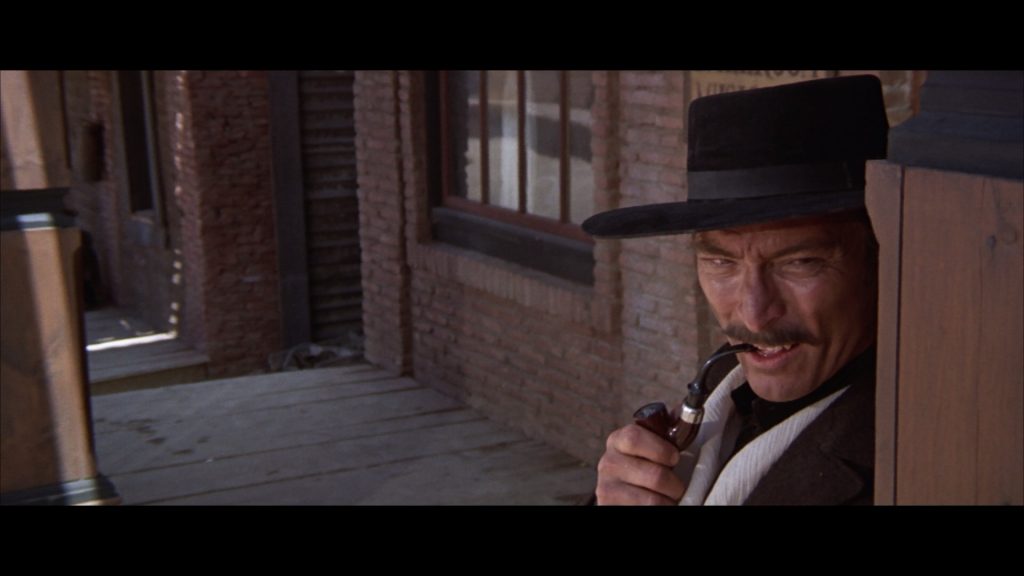 ONCE UPON A TIME IN THE WEST | The American West
Leone’s ‘Man with No Name’ trilogy was released as a fait accompli in the space of 12 months in the USA, immediately establishing Eastwood as a movie star and the director as a man who had revolutionized the moribund Western. Leone used his new found clout to trade in his Spanish ersatz West for John Ford’s Monument Valley and a cast of iconic American actors to replace the Europeans he’d been employing and dubbing over. In the opening sequence, Harmonica (Charles Bronson) is met off the train by Al Mulloch, Woody Strode and Jack Elam. The original idea had been to have Eastwood, Wallach and Van Cleef, but cannily Clint saw no upside to his being humiliatingly dispatched in the first five minutes of Leone’s new opus. The boldest casting came with Henry Fonda’s Frank. Hollywood’s good guy, their Young Lincoln, was now a child-murdering, rapey mercenary, terrorizing Claudia Cardinale’s prostitute who’s trying to make a new life for herself. Morricone’s score was now so integral to the action it was recorded before filming and then played on set so Leone could time his shots to the music. Without the simple dynamics of a treasure hunt driving the plot, his latest was Leone’s loosest plotted film yet – a wandering fugitive Cheyanne (Jason Robards) turns up and hangs around for a while motivated merely by inertia. The film plays best as a mood piece – an opera in which the arias are stared rather than sung, as one critic put it – with a real sense of death hanging over the whole picture. It was also Leone’s first film to feature a female lead, and it unfortunately betrays Leone’s less-than-woke attitude to women, but Cardinale is such a powerful actress she manages to make her Jill a woman to be reckoned with among the testosterone of all those cowboys. 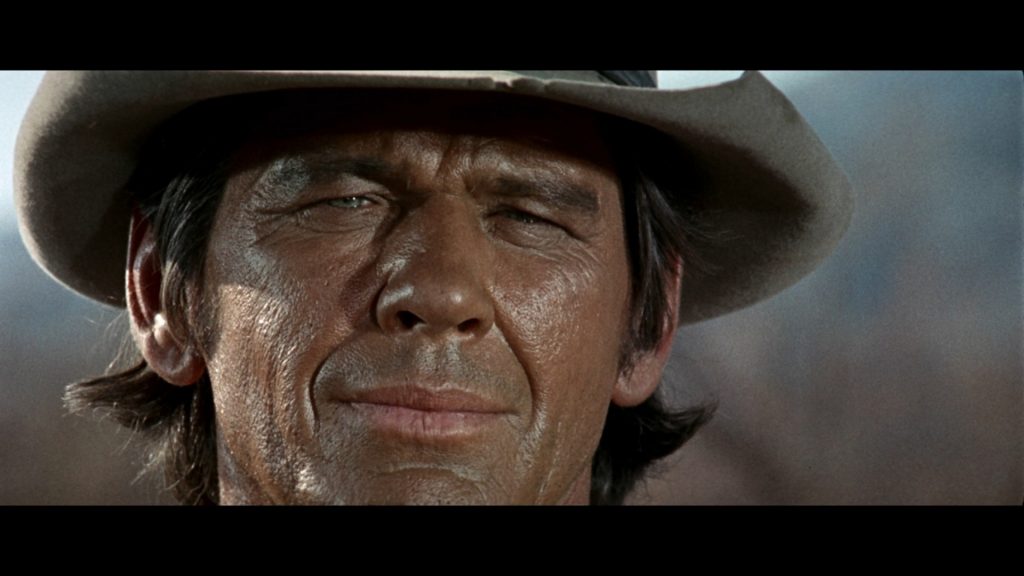 ONCE UPON A TIME IN AMERICA | The gangster epic
As happened decades earlier in Hollywood, Leone traded horses for motorcars; six shooters for Tommy guns and wide open spaces became the criminal underbelly of the city streets. Leone’s last completed movie is a breathtaking piece of cinema. Robert De Niro and James Woods are two Jewish gangsters who grew up in the same neighborhood in New York. Moving back and forth between childhood, adulthood and old age, Leone tells a tangled tale of friendship and betrayal; madness, daring and deep life-blighting regret and links it to the a corrupt capitalism that easily absorbs the gangsterism of its ambitious criminals into its political upper class. 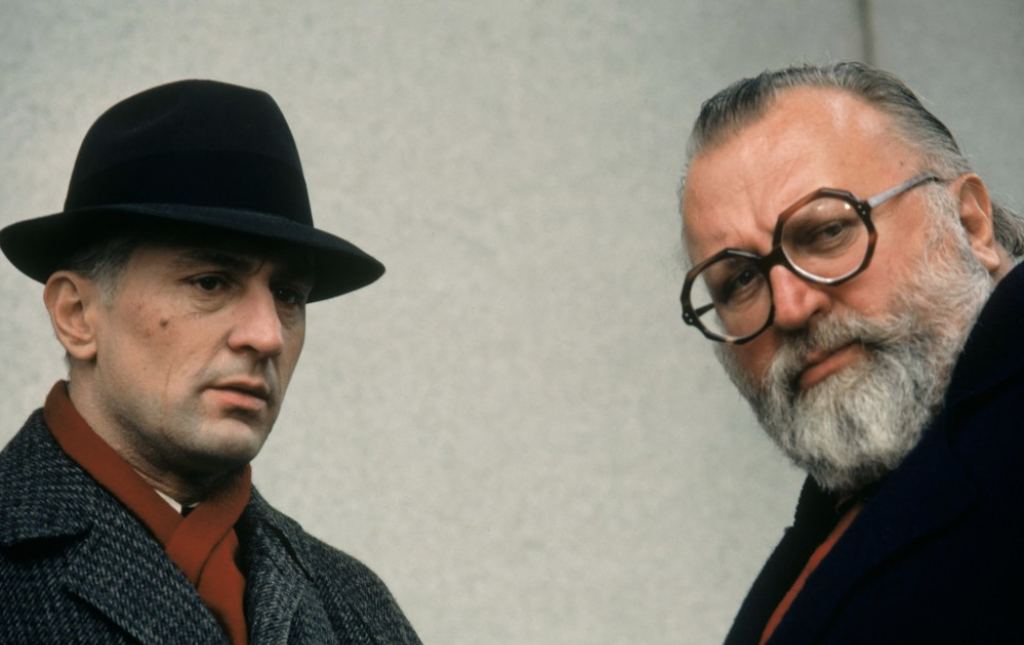 It is a complicated and ambitious undertaking which was brutally edited – by the editor of one of the Police Academy movies, allegedly – and dumped into theaters where it flopped. Various restored versions existed, but studio interference aside, Leone’s ultimate picture is a flawed masterpiece, marred by a particularly virulent misogyny that runs throughout and the opacity of the plot. That said, De Niro and Woods have never been better and the recreation of turn-of-the-century and then Prohibition Era New York is stunning. Once more Ennio Morricone provided Leone with one of the most beautiful elegiac scores to grace a motion picture.