This week marks something rather rare, as there are seven notable releases this week, and we only went and enjoyed every single one of them – so spoiler alert: this is a very positive article. So let’s start with our favourite, which is the American indie drama The Peanut Butter Falcon, starring Shia LaBeouf and Dakota Johnson. Though while they may be the most high-profile, the film is stolen by its protagonist, played by Zack Gottsagen. It’s a creative, resourceful endeavour that tells the story of a man with down syndrome who escapes the old people’s home he lives in chase his dreams: of becoming a professional wrestler. Gottsagen is brilliant in the lead role, with an infectious optimism for life that emanates off the screen, and he’s matched at every turn by LaBeouf, who shows off just how fine an actor he really is.

Next up is A Shaun the Sheep Movie: Farmageddon. We can’t say we particularly needed a sequel, but now it’s arrived we sure are happy it exists, for this is yet another charming production to come out of Aardman studios. Following on from its predecessor, this is another silent movie, and so relies heavily on its story and its heart and it more than delivers on both. It certainly takes pointers from E.T., but if you’re gonna be influenced by any movie, you could do a lot worse than that one. A special mention to for the plasticine fries one of the character eats. We’d eat them, no matter what it would do to our stomachs.

Then we have a great documentary in the form of Mystify: Michael Hutchence, about, well, it’s pretty clear really. It’s fascinating for British audiences to indulge in for the Hutchence we knew was so embroiled in tabloid controversy it feels like we never truly got to know the real man – until now. Directed by a close friend of the subject, Richard Lowenstein, his natural affection for the INXS frontman shines through, and he gets remarkable access to friends and family and those who knew Hutchence best. This paints an authentic – warts ‘n all – picture of the man, with some intimate home video footage on hand. It’s a film made with love – so much so, even his ex-girlfriends don’t have much bad to say about him.

Another sequel out this week that we don’t necessarily feel we needed was Zombieland: Double Tap, ten years after the original hit our screens. The zombie sub-genre has become a tired one in contemporary cinema, but this relies heavily on its characters, and they’re all brilliantly well written. The leading quarter of Woody Harrelson, Jesse Eisenberg, Emma Stone and Abigail Breslin are on good form, helped along by a script that is as funny as it is tender. Apart from when they’re kicking the shit out of zombies, of course, that bit is just funny.

Keira Knightley returns to our screens too this week in Official Secrets, telling the real life story of Katherine Gun, who risked everything to be whistleblower and release top secret information concerning the Iraq war. It shines a harsh, uncompromising light on a shameful period in British political history, and maintains a tension as a result of its narrative. Knightley is great, though the film does get somewhat tedious in the middle stages, but is brought back to life with the introduction of Ralph Fiennes, who plays the protagonist’s lawyer.

And now to yet another sequel we didn’t need but aren’t complaining about now its here, and this time it’s a new Disney live-action feature, in the form of Maleficent: Mistress of Evil. Angelina Jolie hams it up gloriously here, as though a pantomime villain – and yet again the line between good and evil is deliciously blurred and the waters muddied, making for a surprisingly nuanced pice of entertainment. Not to mention the fact the crux of the narrative is pitting mankind versus the environment, scrutinising on our relationship with the world we inhabit, and tragically mistreat, which all feels particularly pertinent.

Finally we have Non-Fiction. Our last film is usually the dud of the bunch but that can’t be said of the latest by Olivier Assayas. The film is dialogue heavy, it’s intellectual and witty, and, in short, very, very French. So much so the director actually told us that in France there has been some backlash towards the film for being ‘too French’ Make of that what you will. In our world, a statement like that is something of a compliment.

More of The Peanut Butter Falcon 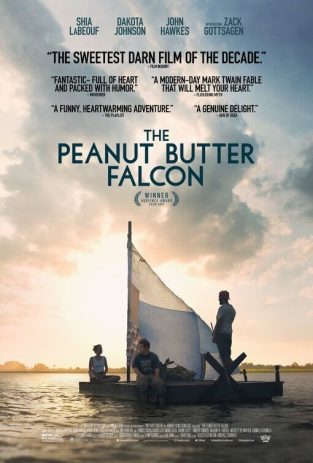