Martin Scorsese has been vocal of late in his thoughts about the Marvel Cinematic Universe, and how the films that make up the franchise are not really ‘cinema’. When we sat down with the hugely talented director Roland Emmerich, to discuss his new film Midway, it would appear he too finds himself drawn far more to tales steeped in humanity, which is notably the case in his latest endeavour, a war movie that delves into the devastating battle between the Americans and the Japanese during WW2. He tells us why he isn’t attracted to fantasy films any more, and how he feels being German set him in good stead to tell this tale, while we also discuss the brilliance of Woody Harrelson, and the challenges in getting films like Midway off the ground.

What was it that attracted you to this story at this stage in your career?
Well there’s a lot of factors, like with every movie. I like that it’s a big comeback story, I was inspired when I saw a documentary about it, how many factors it takes in a battle, how much coincidences and small little things matter in a battle. I like the the aspect of naval intelligence because it was so important in that battle, and I also like to portray two cultures and how different they are. Japanese culture and American cultures are as different as they ever can be.

The film remains very sympathetic to humanity, it doesn’t take a side as such. How important is that for you? Because some war movies can be guilty of only exploring the humanity from within the heroes camp?
Yes, and I was totally aware of that. You know what, maybe it’s because I’m German, the Germans were on the fascists side, I think a lot about what my dad told us, he told us how much he hated the Nazi officers because they were all super arrogant and felt entitled, they felt like better people. My dad had to go to war very young, he was 17, he had no choice, so there was that in it. I also read a lot about the Japanese side of it. When you’re looking to make a war movie and you create some sort of thing where one side are the bad guys, you do a disservice to what war means, because it’s not the people who fight the war who caused the war, it’s the politicians. Nobody will ever make movies about the politicians who start wars, it’s boring. Nobody knows exactly how that works anyway.

You have this wonderful knack of placing very ordinary people in the most unordinary situations in your movies. When you’re looking back across your career, is that what connects your films together?
Yeah, it’s just what I am interested in. I am not interested in superheroes, I’m not interested in James Bond, I just don’t like that. Even fantasy movies don’t do it for me. My all time favourite movie is probably Close Encounters of the Third Kind, just because of the fact it’s a normal electrician who ends up going in a spaceship. Why not? You know. That was a deeply, deeply touching movie, it shows a little bit how I am, and how my thinking goes. But you’re right, I do like to have normal, regular people facing incredible odds. My films are about regular people having to come together to overcome something big. Whether it be a Godzilla monster, or it could be an alien invasion, it could be a war. It’s very rare that I do something totally different. Anonymous was different, it’s probably the only movie that is totally different from my other movies because the theme there is that the pen is mightier than the sword. I would say coming together to overcome is my theme. In all my movies people have to come together. For example a couple, a wife and husband who are not together anymore, come together in 2012, or in The Day After Tomorrow they also come together, I always think that coming together is important.

Talking of which, you’ve worked before with Woody Harrelson, and he’s just one of the best actors in the world. While this cast is incredible, let’s focus on him. He’s one of the best.
Absolutely. I love him. He became my friend because he’s such a warm-hearted, nice person, very, very unique. He comes to press screenings with flip-flops on. He doesn’t care. He’s just that kind of guy. Also I don’t think he’s doing enough serious parts, I really believe he should do more serious parts, because then he can really show how great an actor he is.

You’ve made some huge movies, we’ve mentioned a few, from 2012 to The Day After Tomorrow – but is it harder to make original films like that now?
Totally. Totally. It’s become nearly impossible. Even a studio movie now has to seek outside financing. You need Chinese people who want to spend a lot of money on your movie. It’s only the franchise movies that studios really guard, but every other movie has to be co-financed.

Would you ever entertain the idea of doing a big franchise movie? Or is that just not really your thing?
It’s just not my thing.

Moonfall is next – what sort of stage are you at with that?
We’re at the design stage, we started to design two or three weeks ago, but it’s a little bit difficult because I’m constantly travelling so I have to do everything over a computer, on Skype and stuff. But I have a production designer in Los Angeles who I work a lot with, and a conceptual artist in Vienna I work a lot with, so I’ve put them together and we talk three ways and good things come out of it. It’s a fascinating subject because I read a book ten years ago from two English authors called Who Built the Moon? and it was such a shock for me, I mean, who built the moon? It’s always something which gets me thinking, so I thought I would make a movie about this, and it has taken me pretty much ten years. Again, the studio were not really happy with it, so I said you know what? Give it back to me, I will finance it myself. And I did. I’m really happy about it. You know I did this also with Midway and it’s a really, really great way to make movies, but you naturally have to be somewhat known, with an unknown first-time, second-time director, I don’t think that’s possible.

Midway is released in cinemas on November 8th 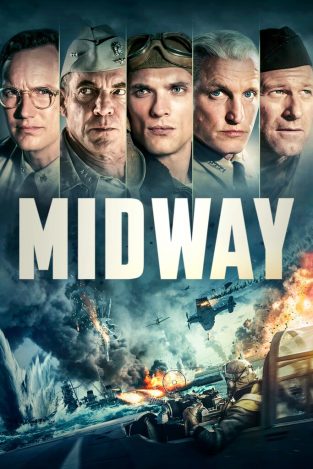