LONDON – It’s not easy to sit through a film as moving and searingly naturalistic as Ordinary Love, but when told with such a delicate touch, and with such an unwavering commitment to exploring the strength and compassion in humanity, it makes it somewhat easier. Needless to say we were thrilled to sit down with the two directors Lisa Barros D’Sa and Glenn Leyburn, who were behind the film’s triumphant tonality – to discuss why they felt so inclined to tell this particular story.

They speak about focus on normality in abnormal situations, and how unique it is to see people over the age of 50 be intimate on screen. They also talk about avoiding sentimentality in what is a ‘cancer story’, and on the excellent performances from their leading duo Liam Neeson and Lesley Manville. Finally they draw parallels to their excellent preceding feature Good Vibrations, and tell us what they have lined up next…

How did you come to be involved in Owen McCafferty’s script?

Lisa Barros D’Sa: We’d been hoping to develop a project with Owen for some time, through our production company that Glen and I have with David Holmes. Owen is obviously a renowned playwright in Ireland and far beyond and we’d been discussing developing a screenplay together and this script, as you may know, is based on a very personal story that Owen and his wife went through and it really our collaborator and partner David who suggested to Owen in the first place that this could make a great subject for his screenplay. He was a little reluctant at first because he didn’t want to take his wife into that world again, but David was pretty persuasive and Owen wrote this beautiful screenplay.

Glenn Leyburn: Also with Owen, when he sat and thought about it, he realised it wasn’t a cancer story it was a love story, and I think at that moment he realised he could do it.

LBD: That’s what we were really drawn to as well, we felt it was an unusual love story about a couple in middle age, who have spent decades together, they’ve been through some tough stuff, and a thousand precious days of normality, and we felt it was fresh to look at a couple at this time in their life, who still have a very vibrant relationship, they still make each other laugh, they still fancy each other, it’s not a power struggle they’re very equal in their relationship. Different, but very equal. We just felt this was territory we don’t see explored very often. It’s also a story that explores the poetry of those everyday moments that make up life. Even when going through these big moments, confronting the mysteries of life and death and loss and grief, we’re still unloading the dishwasher, working out what to cook for dinner.

GL: Or defrosting chops. We love that scale, from the epic to the everyday, the biggest questions of life and death, and do you defrost the chops?

We spend so much time in the cinema focusing on the notion of falling in love, what we often disregard is the maintaining of it. Not to mention the fact it feels strange watching two people over the age of 50 be intimate on screen. Was that a big part of the appeal, to tackle relationships at that stage in our lives?

LBD: Absolutely. We loved this because it wasn’t about the beginning or the end of a love story, it’s about what happens at the heart of a love story, deep in the middle of it. Where everything that this couple go through is inside the parameters of this relationship that has been going on for such a long time, and this influences the way they react to all the elements of what they’re confronting. So absolutely it felt really exciting to show a vibrant, romantic love story between these two people who do have a love life together at that stage in life, something that happens all the time in real life of course, but we don’t tend to see it reflected on screen.

GL: With a subject matter like this it can sometimes be sentimental and I think this script didn’t feel like it had any of that sentimentality, and that’s what we loved about it as well. There was an honesty and an authenticity to it.

And they fight as well, which is so good to see. He’s not just constantly doing charity runs, or caressing her head – they fight. Which is so much more realistic. But on that note, I told my mum about this film and she said she may not see it, it’s a subject too close to home, and some people may feel that way. But this is a story of hope, isn’t it?

LBD: Absolutely, we felt that ultimately we wanted to create an uplifting story. I think there are stories told about cancer and for a lot of people living through cancer there isn’t a good outcome, that diagnosis can mean a fatal outcome. But a lot of people are living with cancer, they’re diagnosed and they’re going through treatment as part of an everyday normality, maybe for the rest of their lives, lives which may also be incredibly rich and full of joy in lots of other ways. It was important for us to show that because that’s the reality so huge numbers of people in this country and all around the world, and that was one of the reasons we were able to enlist the support of so many brilliant medical professionals who helped us to tell this story in as authentic a way as possible, because that’s something they didn’t see reflected on screen very often.

When watching films made by people I often try to find a continuing strand in their work, or something that connects them together. And when doing so with this and Good Vibrations the thing I did find was the notion of finding hoping in the hardest of places, the Troubles and now with cancer.

GL: You’re absolutely right. That is totally true. To some people this seems so far apart with Good Vibrations, but you’ve completely nailed it, that’s true. The Troubles is the back drop in Good Vibrations and cancer is the backdrop to this, but within that there is hope, and the human spirit rises above.

LBD: This is a real celebration of this beautiful connection that these two people have found together that keeps them afloat. It’s also about our ability in those times to find courage, and be able to reach out to others under those circumstances too. People do have an extraordinary capacity to absorb difficult challenges into their lives and continue to live really rich and vibrant lives.

GL: Another thing that appealed to us, given the subject matter, we did feel like there was a lot of warmth and humour within the script, that was consistent throughout it wasn’t just at the start and then descends into bleakness, they hold each other up and support each through that, and humour is an important part of that.

The two performances are exceptional. I’m interesting in the casting of them both together, did you have to see them together first, or just go off a hunch, because their dynamic is so important to this film working.

LBD: So important. But no they had never met before this.

GL: They had mutual friends.

LBD: It was a real privilege being able to bring these two greats of cinema together for the first time together on screen, that was a huge joy for us. We had been speaking to Liam in the past about another project, so we got to know him a little bit and when we read the screenplay we could just hear his voice in the character. As for Lesley Manville, she’s just one of the greatest actors working today. We’ve been fans of her work through her Mike Leigh films to Phantom Thread recently, and she’s just a phenomenal talent who can do pretty much anything with such sensitivity and nuance. Both Lesley and Liam share a real honesty and naturalism, you just believe them any time they’re on screen and we felt they’d really gel and create this beautiful chemistry that we needed. Of course you never completely know until you see them in the room together, but as soon as they were there reading lines we just knew it was going to work. They’re just very honest, compassionate people who have a real warmth and a dry wit, and a shared sense of humour and together they made the set a very pleasant place to be.

I interviewed Paul Greengrass a few years ago for Captain Philips and he said there was a scene with Tom Hanks where he turns in a masterclass of acting and he said everyone on the set was in awe. There’s a couple of scenes in Ordinary Love where Lesley in particular is astonishing – what was it like being on set in those moments? Are you able to step back and think ‘wow’ or does that all happen in post?

LBD: You can appreciate them in the moment.

GL: Yeah the hairs on the back of your neck stand up and you’re welling up.

LBD: You know when it’s very special. There were a couple of intense scenes here as you say, and while Lesley and Liam are very light-hearted in between takes, when they go to that place I could feel on set that even people listening in could feel there something special going on. Lesley is incredible, there’s never a bad take. Same with Liam. But there were moments where it goes to this quite magical, extra level.

GL: As a director that’s the sort of thing that makes you realise this is why you do the job. Those moments on set. These characters live in your heads for such a long time, sometimes years, and then when you’re finally in that moment and you have a great actor and you’re there and they’re doing it, it’s incredibly emotional.

What’s next? Have you started working on the next project yet?

LBD: Very different projects too. It’s just a case of seeing where it all fits together in the big jigsaw of financing.

Well a big BAFTA push for Lesley would no doubt do the next project a world of good.
GL: Yeah it would!

Ordinary Love is released in cinemas on December 6th 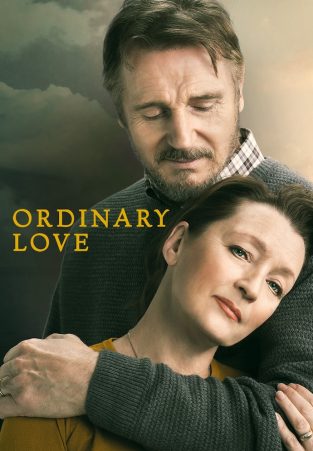