As fun as it is to meet directors and actors, to discuss the process of performance, getting to grips with a story and presenting to the public – what’s even more fascinating is meeting the subjects themselves, to not talk getting into character, but instead what it was like actually being that character. Needless to say our conversation with Daniel Jones, the subject of The Report, was insightful and compelling. For he was the man who compiled the Torture Report, and is being portrayed on screen by Adam Driver. He talks about Driver’s portrayal, and why he believes this film to be an extension of his story, not a mere retelling of it. He also runs through the events that inspired this movie, and whether he ever felt in danger, and what drove him to keep going.

What role did you play on this film? Of course it’s based on your experiences, but on a day to day how involved were you?
So after the report came out in December of 2014, my job was to talk to academics, people writing books and from the creative community, and Scott Burns was one of the people who called and wanted to learn more. He set himself apart from others, right off the bat, because he was asking way more detailed questions than anyone else. I found that we basically cared about a lot of the same things, and we’re both investigators, believe it or not. He’s a writer but he investigates before he writes. We struck up a relationship, we were in the same city and we’d get drinks and over the years we’d talk about political things and research. My job, for free, was when he had questions about factual accuracy, I’d respond.

How was Adam’s portrayal of you? How do you judge his Daniel Jones?
Adam is just so fantastic. It took seven years to get this report out, and that’s put into a script, and Adam had to show that lapse of time in his face, and to think it was filmed out of order, it’s an incredible job. He has to hold it all in his head. Scott talks about knowing your lines and understanding your lines, and for Adam it was really important for him to understand.

Do you see yourself in his portrayal? Or when watching the movie does it feel like you’e watching somebody else’s story?
He portrays this frustration throughout, he’s just frustrated and working tirelessly, and you know, there was this degree of frustration when I was working on it, and understanding the importance of it. Any good investigator is a bit obsessive, and Adam approaches his profession is an obsessive way, and you can kind of see that in the film.

In some ways this film contributes to your drive and yearning to get this story out there, part of the film’s dramatic tension is whether this report will see the light of day and whether people will be aware of what was happening. Is this film like a continuation of that victory for you?
I am so happy you’ve asked that question, because that is why I’m sitting here today. We fought to get this report out, but how many people read a senator’s report? So if that reached one million people, how many people will Scott’s film reach? It basically extends that mission, and that’s why I’m sitting here.

You talk about frustration, but do you know feel like you’ve reached a point of closure, where you’ve done your job now? Or do you still feel there’s a fight to have?
I still feel there’s a fight to have. If you look at public opinion ratings on the use of torture right now in the United Staes, they’re atrocious. A lot of it is because of a Hollywood problem, Hollywood creates these images where you pull someone’s fingernails and they give up the plot, but it simply doesn’t work that way. What we documented going through six million pages of records, what was the CIA knew before they started this programme. People will say anything when they’re being tortured, it creates false answers and useless information, and we document that in seven thousand pages, and the fact Scott can tell that story, it’s not only a story for the United States but a story for the world.

I still can’t quite believe what the CIA did. I saw the film two weeks ago and I’m still in shock. Do you still feel shocked by it? We’re conditioned to think that the people who represent us will always act like we will act, and it’s overwhelming that the people on our “side” are being inhumane.
I’ve been looking at this since 2007, and I still can’t get my head around it too, you’re absolutely right. It’s important to remember that there are people at the CIA who object to this programme, and we talk about that in the report, and it’s in the film. There are different opinions and people left because they wanted nothing to do with this.

What you did was incredibly courageous, but were there times where you had to question whether you wanted to carry on? Being a whistleblower brings about a whole new responsibility and dimension to your life which is irreversible. You\re fighting for the truth, but putting yourself in the firing line at the same time. Did you ever question whether it was worth it? Or were you always defiantly after the truth?
It becomes a relentless pursuit in one direction, and you become obsessive and close things out, and any time you’re doing a hardcore investigation, or writing a book, but in this case it was too important to ever doubt it, you just had to push forward, keep moving forward. What we were uncovering was shocking, but the only way the world was ever going to know what was happening was through the senate, and that kind of pressure drives you.

How surreal is it seeing your story on the big screen? Seeing things you went through? Despite the fact the most important thing remains that you’re presenting the truth to people who might know it – it must still feel pretty cool?
It’s your story, it has been your experience, so it’s weird. It did come out publicly in 2014 and one of the things that is surprising to me is that people who follow the news all the time, that are really engaged with the world, only have a vague recollection of what happened. They remember there being torture, and it being a front page news story for a day, but then it drops out and nobody really remember the details. People who follow the news see the film and still say, ‘I did not know that’. They learn so much, and I’m really so thankful to Scott for bringing this story to a larger audience.

I think we just can’t absorb every new story, because it’s too depressing. We do have this inclination of reading a headline or a story, and think ‘that’s terrible’, and then just move on. But what this film showed to me was the effort and bravery and time that was put into these stories we can flick through so quickly. Do you think the public is guilty of not giving stories like this the attention it deserves?
I think we’re trying to work through this weird period right now, where there are stories that pop up, and everything, no matter how bad, seems to be a 24-48 hour story, and we move on. The fires in the Amazon are still happening, but it’s a one or two day story, and we move onto the next thing. All this jumping around is something we have to figure out. One of the important things we’ve learnt about humans is the importance of narrative and storytelling, and this is why films like this matter, because it’s bigger than just reading a newspaper story, it allows us to tell this story with branches and leaves, and now people will remember it after watching the film in a way that they won’t remember it from reading a newspaper article.

So are you a big fan of cinema?
I am, yeah, but I didn’t get to watch a lot of it for seven years.

When I speak to my mum about the first five years of my life, she always says she can’t remember anything else that happened in that time, especially in pop culture. Do you almost look back over that seven year period like a blur? Because I guess outside of the report, very little else mattered?
Absolutely. It’s very hard to describe, it’s a bit of a Rick Van Winkle thing, after the seven years, friends I had, people who were dating you realise are now married, and who’s this little person? They’ve got married and had kids and honestly, in the months after the report was finally out, there was a lot of that. I felt like I was asleep for seven years and I missed quite a bit.

The Report is released on November 15th 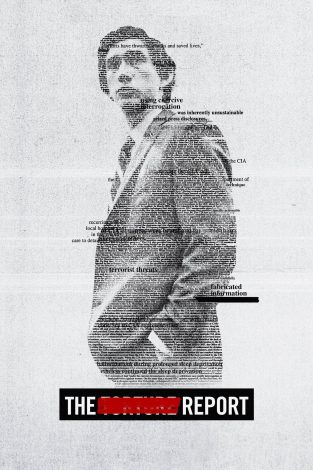