“Cinema can spawn understanding, perpetuate memory, and celebrate people and events. Films can generate empathy and dialogue about important issues. During these contentious times in the United States and worldwide, our need for cinematic catharsis is especially evident. At the origin, Kings was ignited by two events: one private, one historic. In 2005, I was refused French nationality for the second time. This was a personal shock. I am originally from Turkey but arrived in France as an infant and spent most of my life there. Emotionally, this impacted me as a profound, heartbreaking injustice. And from then on, my heart contained a riot.

A few months later, three weeks of riots erupted in France. The rioters were mostly French, yet they were children and grandchildren of immigrants that France had failed to integrate. A deep societal issue was emerging to the surface, and I could intimately recognize the emotions that fueled the fires that burned all over the country. For months, I spoke and read about riots and eventually came across the events that happened during the 1992 L.A. riots. To me, the first spark of intuition about a film is a sacred, private moment, and I started having a first sense of Kings while reading about the Los Angeles riots.

This was more than an intellectual experience of realization or enlightenment over an idea; I remember the physical reaction of rushes of adrenaline, accelerations of my heart and hands shaking. To me, the Los Angeles riots contained the story that embodied that very specific feeling I profoundly needed to express. A few months later, I arrived to Los Angeles for the first time. I spent a month in South Central researching about the riots, and every day further confirmed my initial intuition. From then on, I was going to spend more than a decade to try to make this film exist.

Kings looks back at the 1992 Los Angeles riots. We witness the seven weeks leading up to the riots in the life of a single-parented foster family in South Central Los Angeles. In this prelude to the riots, tensions are building up. Any encounter can trigger conflict, and every exchange feels as a rehearsal to the riots. The film focuses on a family to recount historical events. We see the riots in the perception of all its members, through literally opposite angles and emotions. The story synthesizes extremes of dark and light, dread and humor.

In terms of drama, Kings is constructed around two characters and two plots. The first one is a tragedy, centered on Jesse. It’s the downfall of a promising teenager, who tries to pacify everyone up until the riots. The second plot, centered on Jesse’s foster mom Millie, ultimately weaves humor into the story. Together with Obie, Millie finds herself in a succession of absurd episodes, as she tries to gather her children back home during the first nights of the riots. 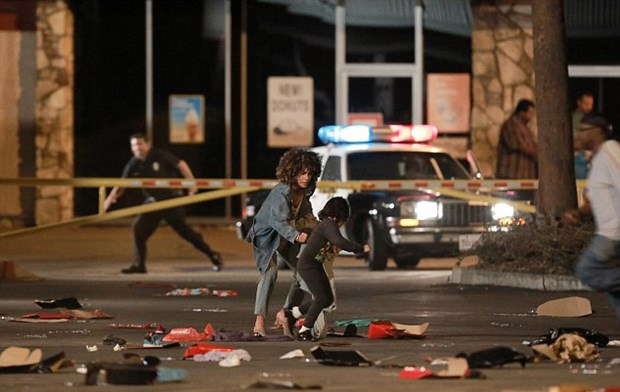 Kings is as much as an emotional as a historical account of the riots. At the foundation of every film that I have done is an emotion becoming a focal point. I spent years researching in South Central Los Angeles. Behind Millie’s family is a real family. Behind each character and each scene are fragmentary reflections of real life persons and real life events. Kings is a love letter to them, as it is a love letter to Los Angeles.