There’s a reason why we keep returning back to the Men in Black franchise. It’s that glorious, enchanting notion of the world not being as we know it. It’s what gave Harry Potter such appeal, this idea that while we go about our lives, there’s a whole other world happening under our noses, secrets, magic, aliens. But this is a mere starting point, to pique our interests. But to keep us board we require strong movies, full of excitement, comedy, and great action set-pieces. Regrettably, this fourth instalment into the much-loved MIB franchise carries very little of any of those things.

Tessa Thompson plays a New York native who has always had a fascination for the unknown, ever since she witnessed her parents being neuralyzed, spending the following two decades of her life desperate to uncover the whereabouts of this secret organisation. When she finally works her way inside, she must convince Agent O (Emma Thompson) to give her a job, hoping to be teamed up with the carefree Agent H (Chris Hemsworth) and seek to protect the planet from the scum of the universe. But it transpires their closest threat may be a little closer to home.

Where the original Men in Black film flourished was in its ineffable charm and wicked sense of humour. Sadly, the laughs in this film are sporadic, few and far between. You think back to when we were first introduced to Will Smith, how he captured the audience immediately, he was a character you wanted to spend time with. The characters made that film, and here they feel like something of an afterthought.

Thompson is shadowing Smith’s journey, in a sense that she represents the viewer, the ‘normal’ person thrust into this otherworldly place, bringing humanity and a relatable sense of clumsiness to an organisation that otherwise thrives in convention and formality. While the actress turns in a fine display, she simply isn’t given good enough dialogue to work with, which is sadly true of the whole cast. Plus, this whole ‘attractive but a bit dim’ schtick that Hemsworth is doing, and doing well we should add, it getting tiring nonetheless. That said, the chemistry between the leads is palpable, and they work very well on screen together. However, we still aren’t very keen on these rumours of a Bodyguard remake. But then why would anyone?

Another shortcoming here is how slick the film feels. There was a dark and murky feel to the original, with characters that had cockroaches coming out of their mouth, it felt disgusting. But this is too perfected, with a huge overuse of CGI. In the very first scene – a flashback to Thompson’s childhood, there’s a luminous blue creature that looks as thought it’s come straight out of Pokemon, it just doesn’t sit right in this universe.

On a more positive note, narratively the film works, and the way the Men in Black organisation expands across Earth – something we rarely see, albeit one that tends to explore different galaxies – works well, and it’s a fun concept to see how different branches operate, with London a poor victim to the alien’s shenanigans. But while the story is now all over the world, we do feel the whole idea for this film is one that shouldn’t have strayed any further than in the minds of the producers who felt a reboot was a good idea. It’s been a fun ride, but maybe it’s time to close the doors on this franchise once and for all. Though don’t neuralyze us just yet, there’s still plenty we’ve enjoyed and taken away.

Men in Black: International is out in cinemas across the UK now. 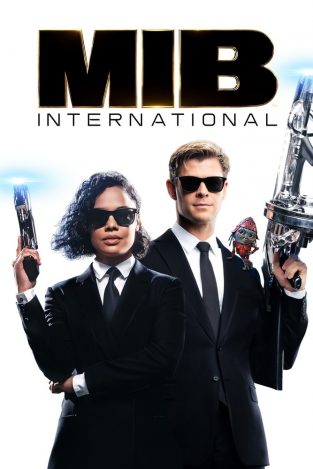