On August 16th, 1819 – 200 years ago to the day – a large gathering of working men and women met on St Peter’s Field in central Manchester. They were campaigning for democratic reform, demanding a broadening of the suffrage, annual elections and parliamentary reform. Orator Hunt was to address the crowd and in the unusual sunny weather – this was Manchester after all – there was a party atmosphere. Many families had brought picnics and their children to make a day of it, and various bands played music to entertain the crowd waiting for the speakers. But shortly after the meeting had begun, the magistrates belatedly decided to arrest the leaders and called in the Militia and Hussars to disperse the crowd.

What followed became known by the ironic sobriquet the Peterloo Massacre, drawing attention to the great British victory against Napoleon and how ignobly the armed soldiers had behaved to the unarmed citizenry. Eighteen people were killed and hundreds injured, many seriously. The response of the authorities was to clamp down on what it labelled ‘sedition’ and congratulate the magistrates on their actions. However, the mood of the country was one of horror and disgust. A journalist from The Times had been present and another newspaper which was to become The Guardian also reported a version of events that showed the authorities in a very poor light.

Percy Bysshe Shelley was living in Italy when he received a packet of old newspapers including these reports. He was enraged and inspired in equal measure and wrote one of the bitterest poems of political invective The Mask of Anarchy. It was so furious that his publisher Leigh Hunt refused to publish it until long after his death. However, this poem would take on a posthumous importance, inspiring the Chartist movement, as well as Mahatma Gandhi, with its laying out a tactic of passive resistance which the great Indian political leader would take very much to heart. More recently, the last refrain ‘Ye are Many, they are few!’ became the inspiration for Jeremy Corbyn’s Labour Party manifesto.

Yet it’s also fair to say that until recently the Massacre was little more than a footnote in a history book, one of those depressing reminders of how terrible governments can behave but overshadowed by ever grander atrocities. Mike Leigh’s 2018 film Peterloo gave a timely reminder of this important moment in British history. The film shows the build up, the excitement of a class beginning to flex its muscles and the reenactment of the massacre itself brings home the panic and horror of the day. There is some cloth-eared dialogue ‘That’ll be them Corn laws father!’ but Leigh is using broad strokes and on the whole the film is a compelling drama.

With today’s commemorations there are also new history books, television and radio specials, new novels and even a graphic novel. Hot Corn writer John Bleasdale’s Blood is on the Grass is one such showing the massacre through the eyes of both an ex-soldier and a young factory girl and recreating a world of thief-takers, radicals and espionage. It’s a fascinating gritty read full of humour and life which transports the reader back to a world when our modern ideas of democracy were being fought over and the outcome was by no means certain.

Buy John Bleasdale’s Blood is on the Grass here. 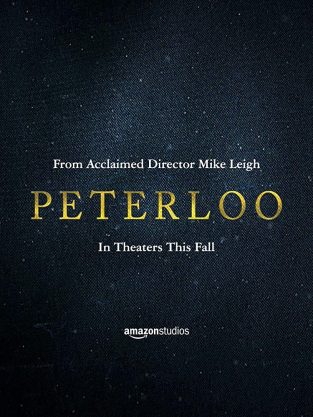