Last year at the Toronto International Film Festival, Hot Corn were fortunate enough to sit down with French auteur Olivier Assayas to discuss his latest film Non-Fiction, starring Juliette Binoche. He discusses his thoughts on social media and film, festival culture, the genius of his leading lady, why the film has been dubbed ‘too French’ on home soil – and why he doesn’t miss writing about movies.

I love the opening scene in the restaurant, and the conversation about social media. What’s your views on that being an extension of art and creativity, and how you feel about minimising art to 140 characters?
You know, the thing with media and technology is you take what’s good for you, but you have to be your own judge. It’s not good for me in a sense that I don’t use Twitter because at some point in my life I decided that there are not enough hours in the day to do that on top of other work I’m doing, but it’s something people enjoy and have fun doing, so great. I’m not a judge. The only thing I would say in my field of expertise, is on Tweeting at the end of screenings. I think it’s a distortion of the process of analysing or understanding movies. Because I have written about films myself, I know that I need at least a few hours to let things sink on, not to overreact, sometimes you walk out of the theatre and you think you’ve seen a masterpiece and a few hours later you realise it’s nothing much at all – or the opposite, you dislike it but later think differently. The process of relating to films is a tiny bit slower and I think Tweeting hasn’t adapted to those values.

Where did the idea for this film come from?
I’ve wanted, for a very long time, to make a movie about how the world is changing and how we adapt, or not, to the changes around us, using the publishing world and the way it has been affected by the digital revolution as a background. I even wrote a screenplay a few years back but the film never happened and at some point I wanted to revive it, because reading it I didn’t like it that much, the narrative format was a bit conventional for me, I felt it was stuff I’ve outgrown. So I started from scratch because I still have this desire to explore these issues, they stayed with me, so instead of trying to build another story I came to just sitting down and writing whatever came to my mind, and I wrote this really long first scene in the film and I had no idea what I had written, I had no idea who those characters were, or whether it was actually a film, it felt awfully long, and I left it at that. I came back a few months later and added a second scene, but after that I did not have a third one, so I stopped there again. The process has been on and off until at some point I realised that this was not just a film about ideas, there’s some sort of inner logic to it and maybe it will become a film.

Is that a usual process for you, to leave such big gaps in between writing scenes?
No, usually I figure out a structure, an arc and I more or less have an idea of where I’m heading and what kind of film I’m making. Here it was very different process.

I love the scene when the authors and publishers are all sitting around at a dinner party – is that similar in the movie world, for actors and directors to get together? And how is it speaking about each other’s projects? Do you discuss them?
Sometimes. But you know having dinner and discussing your job is something that most people do! In every possible job, insurers, bankers, plumbers. They more or less do the same and usually they talk about their smart phones, but what I am saying is that they are discussing whatever is happening and questioning their habits, the way that digital technology has changed the world has affected everybody and it’s something we all constantly question. We try to come to terms with it.

Fellini once said that art is always autobiographical, do you usually bring much from your personal life into your work?
Well when you write you write with your own emotions, your own experiences, your own feelings, but then you add layer after layer and in the end you it’s impossible to recognise the initial spark, the reality that inspired you. All fiction has to be autobiographical in a way, you can’t express an emotion or a feeling if you have not felt it in one way or another. In my films I feel like I am all the characters all at once.

Is goes without saying as she’s brilliant in everything, but I felt the stand-out performance was by Juliette Binoche. You’ve collaborated with her before, she’s a special actress. What is it about her that has given her such worldwide appeal?
The thing with Juliette is that she is extremely smart, she’s made a lot of very good choices in terms of her career, which she has run pretty much on her own, she never had any kind of strategy except to work with people she loves. Gradually she let go, she allowed herself to be herself without constraints, without rules, she has a freedom of movement, a freedom of inspiration which she communicates to her other performers. One of the reasons I love working with Juliette is not just because I love her and she’s a very close friend, or because I admire her as an actress, but what she gives to the film is that she gives to the other actors, she challenges the other actors to be as free as herself, and in that sense she’s a very special actress with a lot of creative input in all of the movies she’s involved in, including this one.

When film’s are so much about the dialogue and conversations – can they be hard to get made?
Of course it is! Of course. The thing is, this film gets tagged as a ‘French film’ because a lot of French films have a lot of people talking, but people do talk in every culture not just in France! But it’s also the notion that you can get away with that kind of film in France more easily than in other cultures, and to some extent maybe that’s right, but the French are so self-deprecating that when I have this kind of screenplay the reaction instantly is that it’s ‘too French’. So it’s a movie that is not easy to finance, the only reason I could get this film made was because I have the trust of Juliette, and Guillaume Canet, because they are very popular actors, so they give some kind of commercial use to the project, otherwise I would never get it made.

You mentioned Juliette’s creative input, but Guillaume Canet has been a director himself, do you find that when you work with actor/directors, when they’re on set they get more involved?
What is great is that they have no ego problems as actors because they are creators of their own right, successful creators. Their ego is not involved in their acting, their ego is somewhere else, so they act because they enjoy doing it, they do it because they think it’s worthwhile, because they’re having fun, the process is giving them something, so in that sense it’s easier to work with filmmakers.

You’ve spoken of the culture of Tweeting after movies, but I’m interested to know what you make of the culture of film festivals. Do you think they can detrimental to criticism, given how many films we watch in such a short space of time?
It’s hard to say, because they’ve always been like that, that’s one thing that has not changed, the critics don’t sleep much and they watch a lot of movies at film festivals, and then get drunk in the evening. I did it, I enjoyed it, but I don’t think you should do it too much because it can fry your brain, and sometimes it can have the wrong side effects, but I also think it’s kind of exciting, it’s an exciting way to enjoy movies, to discover movies. Sometimes it can be very unfair on the films, but from my personal experience I find it interesting.

Do you miss writing about films?
No, honestly I don’t. Every once in a while I write about movies, so once in a while I like to, just to make sure I don’t lose my ability to write, so I don’t forget how to write.

Non-Fiction is out in cinemas across the UK now 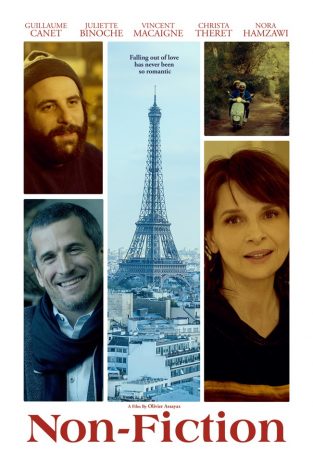