Richard Lowenstein has been involved in the industry a number of years, and following a close friendship with INXS frontman Michael Hutchence, he seemed the perfect choice to helm the definitive documentary about the life of the enigmatic Australian musician. When in London promoting the film’s release, naturally we took this moment to have Lowenstein be the latest talented filmmaker to take part in our popular feature series simply entitled ‘My Favourite Movies’.

What’s the first film you fell in love with? The first film I fell in love with, really was when my father took me along to see Seven Samurai in Japanese, and there had been ninja films on television, and while we didn’t have a television I was just expecting some ninja film and yet it’s a sweeping epic that was so visual, and so awe-inspiring, I knew I wanted to not only be in that world, but I wanted to make those things. Then there’s others, like recently I really do think Robert Altman’s McCabe and Mrs Miller is one of my most favourite films. There’s Emir Kusturica’s Underground, that’s a work of genius. Orson Welles, and not the obvious one like Citizen Kane, I’ve always wanted to see the original The Magnificent Ambersons, because the ending was destroyed. Godard, Vivre Sa Vie is one of my favourites because of its simplicity. There’s heaps. I love the first Mad Max, but that’s because I worked on it.

What’s your favourite movie soundtrack? That will be Emir Kusturica’s Underground, the music in that… Also The Double Life of Veronique I love, by Kieslowski. I could listen to that again and again.

What’s your guilty pleasure? Ah look, I love me some Ferris Bueller’s Day Off. Those great John Hughes films of the 80s, and I really loved the first two Superman films, I don’t think the blockbusters of the current age do what those first two films did, with Christopher Reeves and Gene Hackman, I could just keep watching them.

What’s the one scene that always makes you cry? The end of A Tree Grows in Brooklyn. There’s a few though. Oh I know, Fellini’s La Strada, the end of that is just a guaranteed tear-jerker. In fact that’s my answer. I get weepy just thinking about it now, and I don’t know why, it just gets me. I saw it when I was really young. You can add La Strada into the list of films I can watch endlessly.

What’s your favourite ever music documentary? That can only be Don’t Look Back, by Pennebaker. But I’ve got to say, on top of that, a huge influence on Mystify was Woodstock, Scorsese’s editing in Woodstock, the split screens, are such an inspiration to my project. I remember seeing it when I was about 14 and it blew me away. To have a close-up on one side and a wide-shot on the other, and Mystify pays homage to that. But as a focused documentary, yeah the Dylan one Don’t Look Back is just a masterpiece, but a masterpiece that is so easy to do, it’s just observing, following him around with a handheld camera, and limited resources, but capturing these incredibly intimate moments like his break-up with Joan Baez. When he just sits there with a typewriter in his room in his early 20s just writing these classic lyrics that we know put up and give him a Nobel prize in poetry for. 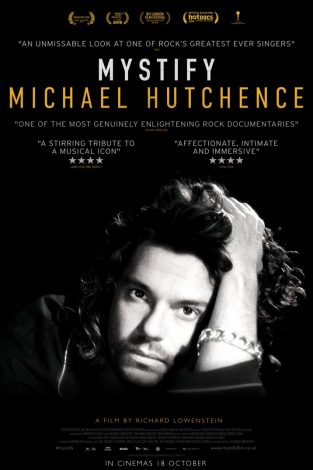