Having astounded audiences with his visceral, and creative feature Berberian Sound Studio, it’s come as no surprise that Peter Strickland has continue to compel, and creep out, in his following endeavours, most recently in the chilling In Fabric. When we sat down with the talented British director back at the Toronto International Film Festival last Autumn, we also quizzed him on all of his favourite movies. Spoiler alert: he likes Dirty Dancing. A lot.

What’s the first film you ever fell in love with? Eraserhead. I was 16, so I guess at that age you’re open to anything, and it completely went into me. So much so, that everything I wrote afterwards was an anxiety of influence, where everything was derivative, and it took a long time to disconnect that umbilical cord between me and Eraserhead. It was incredibly powerful for me, so powerful that I remember the smell of the soap that I washed my hands with afterwards. If I ever see that soap, oh my God, I’m back at the Scala 1990.

What’s the one movie you never get tired of watching? Probably a short film, probably Street of Crocodiles by the Quay Brothers. Probably just because it’s short! But that’s a complete mystery, it’s set in a shop and I saw it on television in 1991 I think on Channel 4. I didn’t understand it all, and I still don’t understand it, but I kind of embraced the idea of not understanding it. I think I can remember someone saying that they regard it like a ballet, and you can key into it and access it, and I remember that comment and it made me think about Berberian Sound Studio and how I structured it more like music, and not to worry about not understanding it so much. The Quays are directors I could always watch again and again.

What’s your favourite soundtrack? Oh I have so many. Let me think… I don’t want to get this one wrong. I love Morricone, Nicolai, Cipriani, all those people. I think Lizard in a Women’s Skin by Ennio Morricone is a pretty strong contender. But everyone will mention Morricone because he’s a genius so I want to think of something a bit different. Serge Gainsbourg did a wonderful soundtrack for Anna. I haven’t seen it, but it’s a great soundtrack. Carnival of Souls by Gene Moore. I’ll have to get my iPod out just to jog my memory! There’s Nicola Piovani for The Voice of the Moon, that’s a very beautiful soundtrack. No wait – I’ve got it! It’s Lubos Fiser, and it’s for Morgiana. That is phenomenal. In terms of Fiser soundtracks, everyone loves Valerie, but I think Morgiana is my favourite. That’s fantastic. What I love about it especially is the quality of the recording, the production of it, it sounds like it was recorded in a cave. It goes beyond the film, I don’t think of the film I think of where it was recorded, and that I find really fascinating.

What’s your guilty pleasure? I have many. Dirty Dancing. I saw that in an open air cinema when it came out in Greece, because I’m half Greek and I used to go there every Summer. The cinema was absolutely rammed, people were sitting on each other’s laps, standing, or sitting on the gravel or whatever. And at the end, you know, the big climax at the end, the whole place went crazy. It’s not just about the film or the music, it’s the idea of watching a film with other people, it can make the experience much more than the film. Cinema can do that to you, the building you watch it in, the people you watch it with.

What’s the one scene that always makes you cry? Probably that, the end of Dirty Dancing. Seriously. I find it very sad because he died, which was very tragic, and it’s a very sad scene now.

More of In Fabric 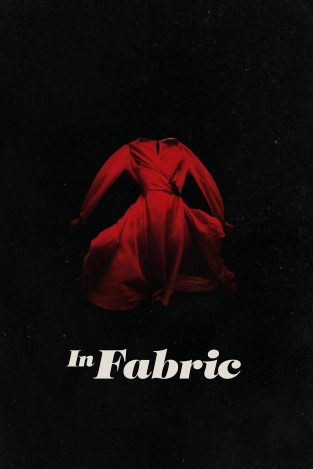