Having starred in Steven Soderbergh’s The Laundromat, in the same cast that also boasts the likes of Meryl Streep and Gary Oldman, it’s fair to say it’s been something of a big year for Chinese actress Kunjue Li. But to top it all off, even better than working with Streep, she also took part in the popular Hot Corn feature series entitled ‘My Favourite Movies’ when stars from both in front of and behind the lens tell us all about, you guessed it, their very favourite films.

What’s the first film you ever fell in love with? Farewell my Concubine. In the 90s, it’s a Chinese film and they’re so brave about it. I didn’t even know what they were talking about, and it could never be made today. It was the acting, everyone is so good in it, and it’s about a cultural revolution, and two guys who are opera actors who fall in love, which is not allowed. So for me that was the first time I saw a same-sex love on screen and the film introduced me to the idea that men could love men as well. It’s based on a book, and the book is amazing. There’s a line in it, and in Chinese it is so beautiful, it’s when the more masculine guy is about to leave, and they love each other in the play and in that story they play characters from my favourite historical people, so I already liked that. Then the writing is so good, the masculine guy says, ‘I have to go’ and the other one says, ‘no you promised me that we’re gonna be together for a lifetime, one day less, one minute less, one second less is not a lifetime’. I’m just translating it, but it’s beautiful in Chinese! The masculine guy replies with ‘are you crazy? That is what I promised you in the play, this is real life we cannot be together’. It’s that kind of thing. That idea of how they felt in a play and how they are in real life.

What’s the one film you never get tired of watching? Monster. There are so many good pieces of acting it. Charlize Theron really just transformed into a different person, and for me I can watch it over and over again and every time I think, that’s not her! She’s just another person. I think that’s amazing acting. I also love Her, that is a perfect film.

What’s your favourite movie soundtrack? For now it’s Spider-Man: Into the Spider-Verse. Uh. I have that on loop.

What’s your guilty pleasure? Can I say Friends? Does that count? I’ll say Friends.

What’s the one scene that always makes you cry? I guess Sophie’s Choice. That always makes me cry. You know the scene. Oh wait actually there’s a scene in The Hour when Virginia Woolf was telling her she wanted to go to London, with Nicole Kidman. Oh my God. Every time.

More of The Laundromat 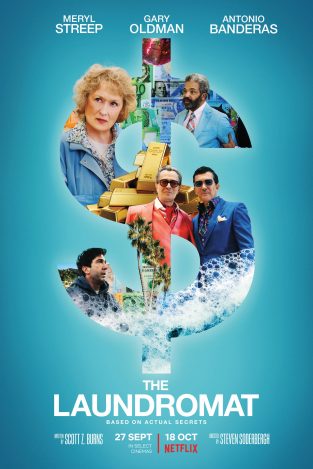