In isolation we all need some entertainment, and that is being delivered in bucket loads, thanks to Russian director Kirill Sokolov, who presents his debut feature Why Don’t You Just Die? This violent and funny feature is getting a home entertainment release, and to mark the occasion, we had the pleasure of speaking to the man himself, on Zoom (of course) as he tells us all about his cinematic inspirations. He also talks about fighting like Chuck Norris when he was a kid, why the Irish are similar to the Russians, and finally comments on why he left a career in physics to focus on a lifetime in cinema.

So where did the idea for this movie come from?

Kirill Sokolov: You know, it came from real life. It’s a weird situation, but a lot of my female friends started to tell crazy stories of how they’d been abused in their childhood by their relatives and when you hear such kind of things from people who are close to you, of course really specific things come into your mind. So that’s why I started to think about this, and I started to write a story about a guy who was told about this kind of situation and he decided to take revenge. It’s inspired by real life.

I can see lots of influences from movies, Tarantino is one. Who are your cinematic inspirations?

Kirill Sokolov: I’m a huge movie geek and movie fan, I watch a lot of movies by myself. I think people who watch a lot of movies will get pleasure from this, because they can find the reference to other films. I am a huge fan of Sergio Leone and spaghetti westerns especially, so there is a lot of Morricone type music, or for example the shoot-out between two characters was edited like the last scene in The Good, the Bad and the Ugly. I am also a huge fan of South Korean movies like Park Chan-Wook’s movies, like the colours or the specific movements of the camera. And also Wong Kar-Wai’s colours. Of course Tarantino and Guy Ritchie a little bit. I also love Danny Boyle, I’m a huge fan and I like how he edits and how he breaks the rules and I find his storytelling interesting. There’s a lot of different references. I’m even a huge fan of Martin McDonagh and he was a big inspiration for me when I wrote the story, this crazy mix of irony and sadness inside of one story. To have crazy violence and at the same time the violence can be funny. I think the Irish sense of humour is rather close to Russian. So he was a big artist for me.

You both like to drink as well, so you have that in common.

Kirill Sokolov: [Laughs] We have similar problems. We all love to drink and the weather is shitty.

You mention the violence. Even though the film is violent, there’s a sort of cartoon-quality to it, and while brutal it’s quite playful at the same time. How important was it for you to counteract the violence with a fun aesthetic and tone?

Kirill Sokolov: It was the goal. If you take just the story, it’s not funny at all. It’s a story about an abusive man. There’s a lot of bad things that happen inside of this story, so it’s really not funny. There are social comments about Russia too. But I wanted to make this movie as fun as possible and this extra-violence will make it like a cartoon, and we use cartoonish blood just to make it less realistic and make people really laugh and remember that they’re still watching a movie and to enjoy it like it’s not real life. That was the point. If you just tell the story without any funny violence or blood, it will be much more dark and depressing.

The violence is very well choreographed too. How intricate was it, to make sure the big fight scenes work? Because they play out like a dance.

Kirill Sokolov: Yeah, it was written, everything was written. But in Russia there is no such tradition like in Hollywood, when you send your actors to practise, and they practise a fight for two or three months, they go to the gym. No, we didn’t have money for that, and our actors are rather lazy. We spent one day in the gym with them. I mean I did draw the fight scenes on a storyboard so they had everything in pictures, and then we went to the gym, practised once or twice, and then after that we just shot it. The result was rather good!

How about yourself as a filmmaker, what age did you decide you wanted to get into moviemaking? Because I read you studied physics.

Kirill Sokolov: I always was a movie fan and I watched movies all my life, in my early childhood we used to play as movie characters, and I had a hat like Clint Eastwood, and we’d play Chuck Norris and fight all the time. Movies have been a big part of me for all my life. But during my education in physics, in one moment, and I don’t know how it appeared, but I decided to make a small short movie with my friends, a fighting movie with ketchup instead of blood and chicken guts and all that stuff. We made it, then another one, then another. I suddenly understood that this hobby took a lot of time and it brought me a lot of joy and I was more happy doing that than I was working in my lab. So I decided to finish with physics and try to become a filmmaker.

How similar are these movies you made with your friends to Why Don’t You Just Die?

Kirill Sokolov: [Laughs] All of my short movies had this same sense of humour, and some kind of violence. Most of them had some kind of socio-political reflection because it’s rather important for me. So Why Don’t You Just Die? has everything I did all my life, all the stuff I learnt from the short movies, so you can see the journey of the filmmaker.

Do you think the best way to access politics and social commentaries, can be through genre movies?

Kirill Sokolov: Yes, I believe that. I like movies that make me feel like I’m having fun, I like genre movies, big action movies, blockbusters, films with CGI. I really like this kind of movie, and it doesn’t mean that these movies have to be stupid. It’s a kind of Spielberg formula to entertain people but at the same time make them think. If you really want to say something, you have to try and make your movie as interesting as possible, to make more people see it. You have to try to combine and mix it. 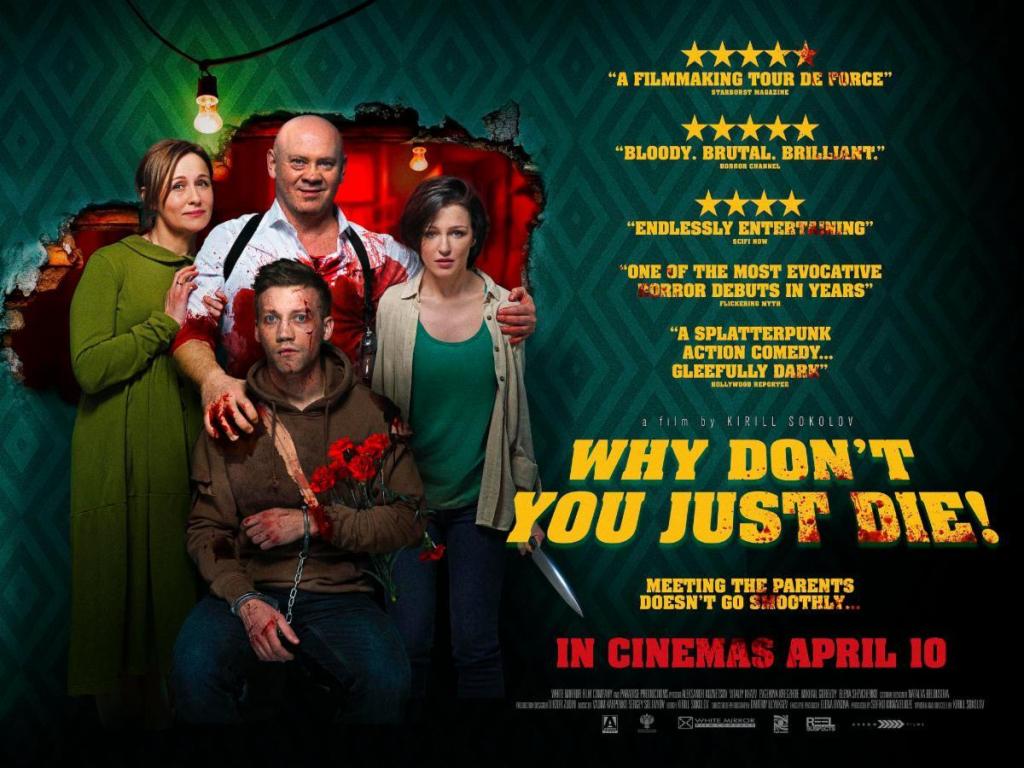 What’s next for you? Have you started working on your next project?

Kirill Sokolov: Yeah we’re now free because of the f****** Coronavirus, but we were prepared for a movie that I hope will be a really cool movie. It’s an adventure movie about three women, three generations of women from one family, who struggle with each other and this struggle leads to a huge chase, and this chase includes corrupted cops, stealing cars, shootings, fighting, and so on. it’s an adventure chase movie. Which in some ways continues the theme of a dysfunctional family, kind of.

Why Don’t You Just Die? is on Blu-ray & digital HD from 20 April and on the Arrow Video Channel from May 4th.