Director Julien Schabel has created some incredible cinema, most notably The Diving Bell and the Butterfly, based on the true story of Jean-Do, an editor at French Elle who suffered a devastating stroke. The story is beautifully told and visually stunning, as you would expect from this artist-turned-filmmaker. Schnabel’s latest offering is At Eternity’s Gate, another true story, this time about the tortured artist Vincent van Gogh (Willem Dafoe). More specifically, Schnabel focuses on the artist’s final years and his relationship with Paul Gauguin (Oscar Isaac). Firstly, it needs to be said that Dafoe’s resemblance to van Gogh is incredible. When we look at the actor with his bandaged head, he is the spitting image of the artist’s self-portrait, made just after van Gogh rid himself of his tiresome ear. 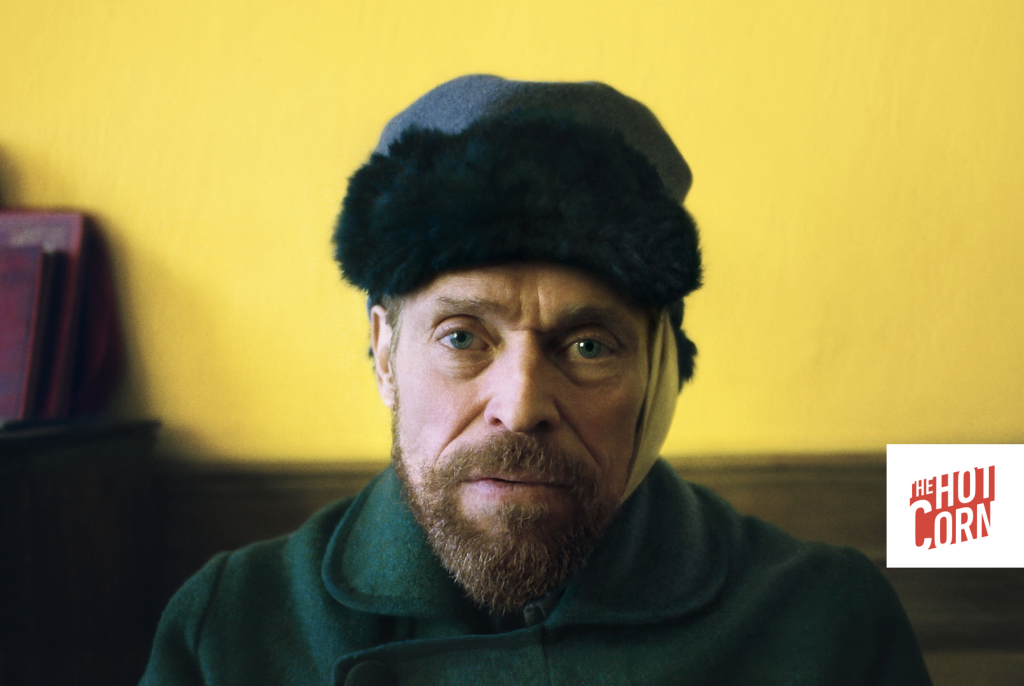 And the film itself? Well, Schnabel makes an effort to depict van Gogh’s paintings in their settings. Yet by reproducing the vividness of the artist’s canvases in their surroundings, Schnabel is somehow diminishing the impact of van Gogh’s work, which is heightened and exaggerated, rather than a mere reproduction of what he saw. And surely this heightened sensibility was what made van Gogh so vulnerable. Schnabel also shows us not just that vulnerability, but the excesses of the artist in thrall to his obsessions. There is a humorous scene when a school party comes across him in a field and a much more sinister one when he encounters a young peasant on a country road.

However, while the director shows us that van Gogh could be a danger to others as well as himself, he also is of the opinion that the artist did not kill himself, but was killed by a local boy. There is a strong supporting cast: Isaac’s Gauguin is not so much the frenemy he is often made out to be, but is merely brutally honest in his search for artistic integrity. And Gauguin’s immense affection and admiration for his friend is clear. There is a small cameo from Mathieu Amalric as Dr Gachet and another from Mads Mikkelsen as the priest who has to decide whether van Gogh can leave the asylum. We have the typical reaction to contemporary art, which is often one of derision and dismissal: Mikkelsen stares at a van Gogh painting and asks how his patient can consider himself an artist.

Yet van Gogh has the perfect – and perfectly lucid – reply, using theology to support his argument. Rupert Friend is a solid, dependable Theo, and the brothers’ closeness is captured when Theo lies alongside his brother in Vincent’s hospital bed. Schnabel’s film comes in the wake of the hugely successful Loving Vincent, so it will be interesting to see if audiences are ready for more van Gogh on the big screen, yet Willem Dafofe’s performance deserves a wide audience. Without wanting to give too much away, if you do go and see this film, then stay until the end credits have rolled, for there is a moving epilogue bathed in the sunflower yellow which van Gogh made his own.