George had been dreaming when the sound of breaking glass woke him up. The dream had been the one he’d had since he was a kid. He was perched on the corner of a building above the main street. It could’ve been Pasadena. And he was getting ready to fly. It was a warm dream. A good one. One when you wake up, you struggle to get back to sleep so you can enjoy it some more. And just as he was about to launch himself swooping over the cars and the pedestrians and the dogs that would bark at his shadow, a glass smashed.

He looked down at the road expecting to see an accident but there was the wardrobe, the ceiling with a rectangle of street light and the sound of Leonore’s laughter downstairs.

‘What the hell…?’ Everyone froze at the sight of George, robe flapping like a cape.

‘We wake you up, Georgie?’ Carol Van Ronkel, ditto.

‘Sorry George, we had a bit of an accident,’ Bob Condon, conciliatory, held his liquor in a tight grip.

‘Do you know what time it is?’ George tried to keep the anger out of his voice.

‘Meetings he’s got! Is that what we’re calling it these days?’

‘And what the hell does that mean?’

‘You know darned well what I mean. Take your pencil out, Bob. This’ll make a good story. Georgie here is still smitten with an old flame.’

‘But the poor gal’s already married. And not only married, married to Eddie Mannix.’

‘So faster than a speeding bullet…’

‘Easy with the cracks, Lee,’ George said. ‘They’re getting old.’

‘He comes to me,’ Leonora had started the fight in the restaurant. They’d gone to the wrestling beforehand to see his old pal, Gene LeBell, AKA Mr. Kryptonite, knock around some Mexican kid. Leonora loved the fights – the yelling, the screaming, the howls of pain – took her back to her dancing days in New York, before she got fired for troublemaking. ‘But he still calls her. He still loves her. He still wants her. Mannix doesn’t like that one little bit. So he calls in the night, leaves bullets in the mailbox, tampers with Georgie’s brakes.’

George looked into his glass and then drank it down in one. ‘Goodnight everyone,’ he said with a smile. ‘Please try to keep it down.’

‘Jesus Christ, Lee,’ Carol said. ‘You shouldn’t be so hard on the man. You’re supposed to be getting married Friday.’

‘Shhh,’ Leonora said, pointing at the ceiling. ‘Listen. He’s crossing the room. He’s opening the drawer of the bedside table. He’s taking out the gun. He’s pressing it against his head.’ 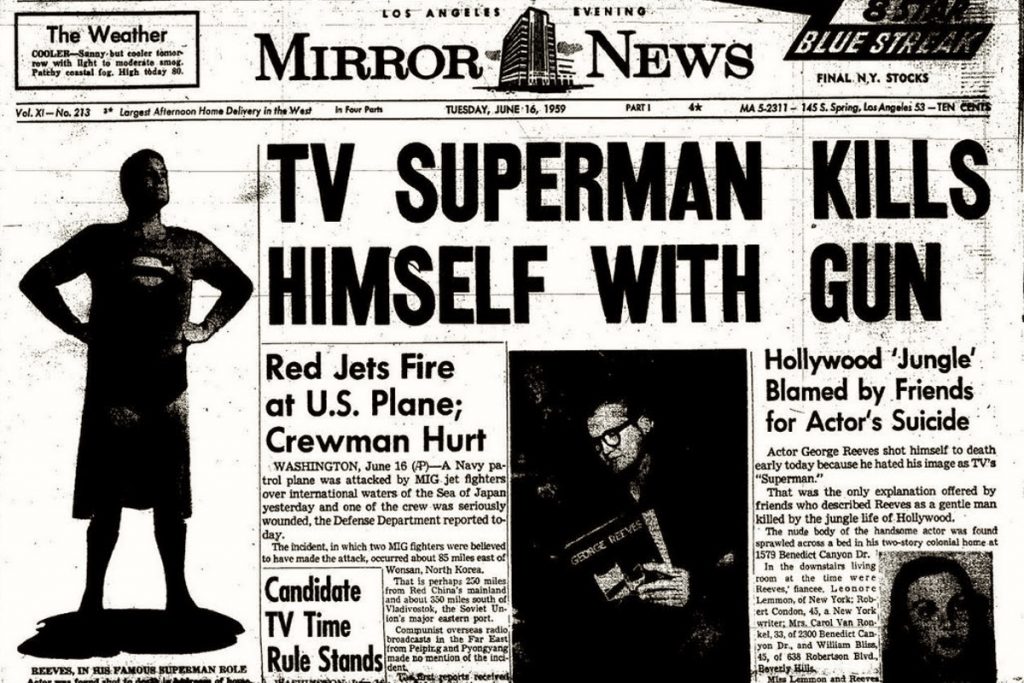 ‘That really how it went down, Robert?’

‘His mother thinks otherwise,’ Eddie said. ‘She hired a shamus even.’

‘I heard about that.’

‘Our boy had no burn marks on the side of his head. And there was more than one bullet hole but no second bullet. And he fell on his back. Typically, those in the know inform me he should’ve slumped forward. And Leonora says they didn’t go to the restaurant with you. You know we’re always looking for good writers here at MGM. Writers who can tell good stories. Believable. This story… I don’t believe.’

‘The second bullet hole?’ Bob shrugged. ‘Anyone could put that in there; at anytime, before or after. For any number of reasons. As for the position of the body, Leonora was hysterical. She grabbed him and held him. We had to clean the blood off of her before the police got there.’

‘And the burn marks?’ ‘He really was the Man of Steel.’

Eddie glared and then laughed, a throaty, rasping laugh. ‘You’re a smart ass, Robert,’ wagging a finger as the inevitable coughing fit started. He rubbed his chest. ‘The part about Toni you can leave out. The poor sap has suffered enough.’

Bob stood. Tossing his hat lightly in his hand. ‘I heard she phoned Lois Lane,’ he said.

‘Toni, I mean, Mrs. Mannix,’ Bob said. ‘She phoned Phyllis, the gal who played Lois in the show,  the night George died. She said, “The boy is dead. He’s been murdered.” That’s what she said.’

‘That’s what she said huh?’

‘I talked to Archie Moore.’

‘Slugger’s got talent. We’re going to put him in Huckleberry Finn.’

‘Still with the wise-assery?’ Eddie shook his head. ‘Archie told me you’d been writing his autobiography for him. Said you were an intelligent man. So, this is how it goes. I hear anymore of this and Toni’s name comes up, or my name comes up … then you better hope the rumours are not true.’

‘That really how it went down, Bob?’ Archie flung the skipping rope across the room and went to work on the heavy bag. ‘I don’t believe for one second Eddie’d do such a thing.’

‘You hear the story about Eddie and Bubbles? Beautiful gal. Had her up in Philmore in a suite, almost her whole life. She says she’s gonna tell his wife. He beats her so bad he puts her in the hospital. Then when she wakes up in the hospital there he is at the foot of her bed.’

‘And he beat her up again. In the hospital. So, yeah Eddie’d do such a thing.’

‘For what? Jealousy? What I hear Eddie’s been seeing that Japanese piece since the ark.’

‘No, that’s the kicker. Toni and Georgie used to double date with Eddie and his girl. It was because Georgie was not seeing Eddie’s girl anymore. George broke Toni’s heart and Eddie couldn’t bear it. That’s what did it.’

For a while there was only the sound of Archie pounding on the big bag, punishing it for all the punishment he’d soon be taking in the ring. Then Archie shook his head, jogging on the spot. ‘It’s bullshit,’ he said. ‘Set up a hit with a bunch of people in the house. Makes no sense.’

‘George Reeves shot himself in the head. Twice.’