From her onscreen beginnings, debuting alongside the Coen brothers in 1984’s Blood Simple, Frances McDormand has been in a lot of films, so people often debate each other over what the greatest Frances McDormand movie of all time is. We have the answer to that yet: Three Billboards Outside Ebbing, Missouri, Martin McDonagh’s modern-day western, a darkly comedic drama about a mother named Mildred Hayes (yes, McDormand) who has had it with the failure of the local police department to find the person responsible for raping and murdering her daughter. Here McDormand discusses her fiery role of Mildred.

MY MILDRED «I read the script, I loved the script, and I couldn’t believe my great good fortune to be asked to play Mildred. Something I think Martin McDonagh is really good at is an almost Greek idea of human existence — there are so many epic, significant ideas he allows himself to explore in this story. Then, by making his protagonist female rather than male he takes it into the realm of grand tragedy. He also plays with the modern revenge genre, but it’s not a film about female revenge. By looking at how a female character seeks justice the story transcends gender to say something about the human condition.»

THE TRUTH «Martin and I never shied away from the truth with each other, I would say anything to his face. Part of making the film was the combative nature of our conversations. We never went into a scene without me questioning some line or the motivations of the character. We particularly argued a lot about when Mildred wears the bandana, which to me is a sign of her taking action — I wanted to wear it a lot more than he wanted.»

JOHN WAYNE «I really latched onto John Wayne in a big way as my physical idea, because I really had no female physical icons to go off of for Mildred. She is more in the tradition of the Spaghetti Western’s mystery man, who comes walking down the center of the street, guns drawn, and blows everybody away — although I think it’s important that the only weapons Mildred ever uses are her wits and a Molotov cocktail. I could see it in her walk and her attitude.»

MOTHERHOOD «As a mother, you live on the edge of disaster, you just do. I didn’t give birth to my son, I met him at 6 months old, but from the minute I held him and smelled him, I knew it was my job to keep him alive. And as a parent, you also come to see how the worry and the anxiety that goes along with protecting someone who you give yourself to in that way, that you surrender to, can become degenerative.»

NO MAN’S LAND «Mildred is really not a hero. She’s a much more complicated person than that. She’s been left by grief in a no man’s land, in a place of no return. One of the things I latched onto as I was thinking about Mildred is that there is no word in most languages for the position she is in. If you lose a husband, you’re a widow; if you lose a parent, you’re an orphan. But there is no word for a parent who has lost a child because it’s just not supposed to happen biologically. It’s something beyond the capacity of language – and that’s where Mildred has been left, so she goes for broke. It’s much easier for her to throw a Molotov cocktail than to cry.» 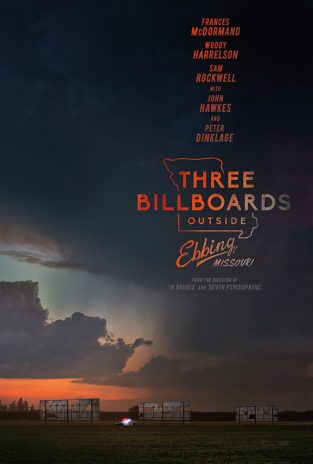