Good and evil, innocence and menace, the historical and the eternal, beauty and monstrosity weave in and out of each other, revealing that no darkness can ever fully defeat the light. Guillermo del Toro‘s The Shape of Water is definitely “a romantic fairy tale for grownups,” an other-worldly fable, set against the backdrop of Cold War era America circa 1962, with the evolution of Gill-man, the lead antagonist of the 1954 black-and-white science fiction film Creature from the Black Lagoon. “But I don’t think the Gill-man is designed in a way that he can be a romantic lead,” said the director, “It’s beautiful, but it’s not a romantic lead.” In The Shape of Water we have Elisa (Sally Hawkins), trapped in a life of isolation. Elisa’s life is changed forever when she and co-worker Zelda (Octavia Spencer) discover a classified experiment.

THE BEGINNING “I sent a message to Sally (Hawkins) in 2013 that I was writing this role for her, and when we met, she told me she had already been in the middle of writing a short story about a woman who becomes a fish. She sent me her story and it was full of insights. Sally is the most genuine, unaffected person and I don’t think she is capable of doing anything that isn’t emotionally real.”

THE YEAR “What interested me is that 1962 is a time when everybody was focused on the future, while my creature is an ancient form of the deep past. People are obsessed with what’s new, with AD jingles, the moon, modern clothes, television. And in the meantime here’s this ancient force, a creature in love, who comes among them.”

THE STORY “I wanted to create a beautiful, elegant story about hope and redemption as an antidote to the cynicism of our times. I wanted this story to take the form of a fairytale in that you have a humble human being who stumbles into something grander and more transcendental than anything else in her life. And then I thought it would be a great idea to juxtapose that love against something as banal and evil as the hatred between nations, which is the Cold War, and the hatred between people due to race, color, ability and gender.”

THE PAST “In a monster movie of the 50s, Michael Shannon’s Colonel Richard Strickland, the square-jawed, good-looking government agent, would be the hero, and the creature would be the villain. In The Shape of Water I wanted to reverse those things.”

THE WATER “Water takes the shape of whatever is holding it at the time and although water can be so gentle, it’s also the most powerful and malleable force in the universe. That’s also love, isn’t it? It doesn’t matter what shape we put love into, it becomes that. Whether it’s man, woman or creature.”

THE MOVIES “I like to make movies that are liberating, that say it’s okay to be whoever you are, and it seems that at this time, this is very pertinent.”

More of The Shape Of Water 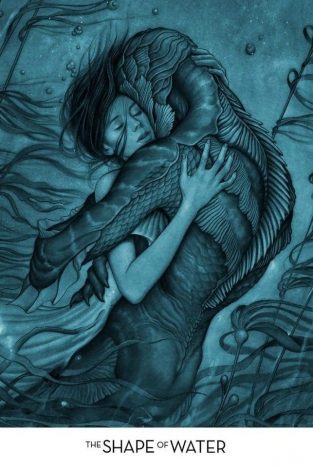