In a career spanning an incredible 40 years, you’d be hard-pressed to find a more intimately personal piece from Pedro Almodovar, than his latest endeavour Pain & Glory. Though standing out on that front, it remains distinctively aligned with his archetypal sensibilities as a storyteller, very much taking its place in his cannon of work; it simply couldn’t belong to anybody else.

For starters, it’s about a film director; and one who is reflecting over the choices they’ve made in their past, revisiting an old work that is due for an anniversary screening, and confronting the variety of demons that came with it. Starring Antonio Banderas in what may just be the actor’s finest ever display – which is Oscar worthy, for sure – this film feels like a catalyst for Almodovar to reflect himself, through the prism of this character and the world he has created.

It’s a world that is undeniably his too, not just from a tonal perspective, but an aesthetic one as well. We think back to 1986 and when Banderas starred in Matador, alongside the director (who has since become a frequent collaborator) -in what was a surreal allegory of sex and death; two themes prevalent in Almodovar’s work, as they are in so many of the Spanish auteur’s offerings.

Since then his eclectic range of films have studiously lingered over the inherent, animalistic emotions that we carry, sometimes with flair sometimes as a burden. Desire, love, anguish, all packaged up and delivered in such an idiosyncratic way, via a filmmaker who has such a unique blend of comedy and melodrama. In Pain & Glory it’s no different, it’s a film enriched by a sense of melancholy, and yet it’s got this vibrant, whimsical edge. His ability to display such raw human emotions in an almost fairytale landscape is so impressive and so difficult to determine – but it just works. It’s as though taking a step back and appreciating humankind from a distance actually gives us the most visible perspective. In being surreal, his films feel so, well, real.

There’s elements of farce too, and here we see shades of Women in the Verge of a Nervous Breakdown, which was a flamboyant and elaborate comedy, and certainly more overt than this piece, but stylistically similar. This reminds of us of his colour palette, his use of imagery so striking and indelible, the way he uses red – each still frame from Pain & Glory could be made into a postcard. It enforces this notion of surrealism too, the way we can watch a scene and be so moved and find ourselves crying and reflecting upon our lives, while the screen we’re immersing ourselves in feels anything but real, it’s like a set from a children’s TV show. Every single detail feels meticulously placed, crafted specifically for a desired reaction. Like how Banderas’s apartment and his clothes are always so fresh, everything so pristine and so clean, it seems that everything he wears and owns is new, when all he concerns himself with is the old, as a film so rich in the notion of nostalgia.

Another theme explored, and one that has become synonymous with his work, is that of the admiration of women – often from his own lens, and often through the eyes of his protagonists. Sometimes with chilling consequences, as in some regards the female form is idolised so fervently by their male counterparts, it reaches disturbing levels, epitomised in both Tie Me Up! Tie Me Down! and in Talk to Her. Somehow though – and remarkably so – we manage to maintain an semblance of sympathy for all characters that appear in Almodovar’s movies; such is his commitment to pathos and humanity.

The way Banderas’s Salvador Mallo worships his mother (played in flashbacks by another familiar collaborator in Penelope Cruz) is emblematic of the director’s work, where women, and mothers in particular, have always been so unapologetically appreciated. I mean, arguably his most iconic piece of work is All About My Mother. Every strong lead is female in that film, so much so that even the male characters are cross-dressers.

Plus, the title says it all. Which also shows off another persistent trait in the Spaniard’s work, which is his unashamed admiration for classic cinema, often from Hollywood. He’s never once been lured in by Hollywood (good!) but that’s not to say he’s not a fan; he wears his influences like a badge of honour, and even the title references All About Eve, with other moments in the film harking back to the likes of A Streetcar Named Desire, with evident Hitchcockian elements that imbue his work – prevalent in the likes of thriller Volver. Not to mention the occasional moment you just know came from a man who enjoyed the work of Woody Allen – like in the relationship drama Live Flesh. You can even see shades of Martin Scorsese in Tie Me Up! Tie Me Down!, with a sort of blend between The King of Comedy and Taxi Driver.

That all being said, his one most overt influence is Luis Bunuel, with so many unapologetic references to the father of cinematic surrealism (a title he is gunning after – in fact, he’s even been known to reference his own work, as Women on the Verge of a Nervous Breakdown appears briefly in Bad Education). In fact, Almodovar’s work has always remained so true of Spanish culture and heritage. Recently in I’m So Excited! he delved into the economic crisis, while he explores the authoritarian dictatorship of Franco, as well Catholic schooling in his feature Bad Education. Then there’s bullfighting, of course a huge part of Matador, and also so vital to the narrative in Talk to Her. Themes and areas he always explores with a critical eye, and yet complete – always – with a sense of patriotic affection, finding a sense of artistry in the most brutal and inhumane of things, which in many ways is reflective of his own style of filmmaking.

Talk to Her is generally considered to be his finest work too, it beautifully blends dark, harrowing themes with a sense of majestic fervour, Spanish culture is magnified and scrutinised, intriguingly witnessed through the eyes of an Argentine, and it results a delicate piece of cinema. Again we find humour in the strangest of places, while somehow avoiding a sense of morbidity.

In more recent years we’ve had Broken Embraces, The Skin I Live In and the absolutely wonderful Julieta. We delve into sexual identity and existentialism, with a lurid melodramatic wit. In short, Almodovar simply isn’t slowing down, and now with Pain & Glory, you could even argue that some of his finest work is probably still to come; for it’s a mesmerising piece, it’s personal, surreal, whimsical, twisted, absurd, and completely, and above all, so pensively moving. It’s just Almodovar at his very, very best.

Pain & Glory is released in cinemas on August 23rd 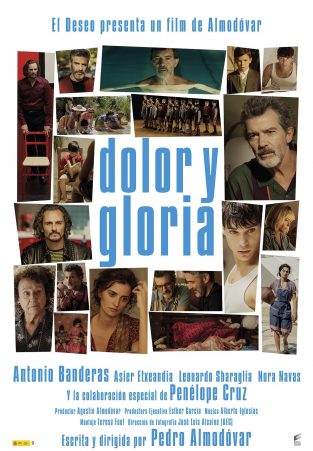