‘From the creator of Terminator 2 and director of Point Break’ is the kind of enticing combo that should have seen the crowds flocking to cinemas in 1995. Alas, that was far from the case with Kathryn Bigelow’s full-throttle murder mystery set on the semi-apocalyptic eve of the millennium (which now seems like a lifetime ago). Strange Days tanked badly at the cinema before finding a loving audience on home video. It’s legacy lives on as the film’s often breakneck depiction of that immersive POV shot is unmistakably a precursor to the likes of Hardcore Henry and the opening to the recent South Korean action fest, The Villainess.

An extremely young-looking Ralph Fiennes (fresh from his unforgettable, stomach-turning portrayal of evil in Schindler’s List) is Lenny Nero, an ex-cop turned peddler of SQUID discs – recordings that allow a user to experience memories and physical sensations plucked straight from the cerebral cortex of the participant. Making his way around a hazardous turn of the century Los Angeles, there’s lawlessness on the streets and simmering racial tensions, owing to a recent assassination of Jeriko One, an influential and controversial rap artist.

Bigelow cleverly alludes to the 1992 LA riots, which gives her film a real-world urgency amongst the pulpy content, and that civil unrest and a city on the verge of a full-scale riot was revisited in her last film, Detroit. Nero’s dealings lead him right into the middle of the conspiratorial cover-up of the rapper’s death and from there the film switches to a satisfying whodunit, where Lenny and his confidant (a hard-as-nails and brilliant Angela Bassett) battle to unravel the mystery and stop LA from tipping into an all-out war zone as the year 2000 is ushered in.

Like his previous sci-fi efforts, co-writer James Cameron does well making the techno babble and jargon here wholly accessible, and he hides the exposition as best as he can do in the dialogue. While the film’s main conceit of offering that alluring escape from reality feels prescient, particularly as VR grows and our hands are welded to our smartphones, somewhat predictably, it’s the technology which also dates the film (the SQUID memories are actually stored on MiniDisc).

Like the tech, Strange Days is not without flaws itself, and the weakest moments, surprisingly, are when it falls into the kind of clichéd action beats you’d think someone of Bigelow’s calibre would have avoided. Juliette Lewis, who plays Fiennes’ old flame – whom he is still in love with – is wooden and weirdly one-note. While she convinces as a wannabe rock star, she really struggles to bring weight as the femme fatale.

As an allegorical sci-fi however, the film remains a triumph and manages to conjure up some truly subversive and disturbing moments (a SQUID recording of a stalking and eventual rape is supremely unsettling). It may have faded from memory for some – but like those who plug into a SQUID recording – as soon as the film begins, you’re immediately jolted into a dark and visceral ride every bit as relevant and thrilling as that decade’s other noteworthy sci-fi, The Matrix. 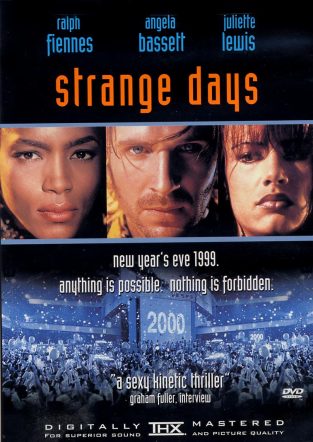