Not a simple documentary, but a modern masterpiece: Rumble: The Indians Who Rocked the World is a touching feature documentary about the role of Native Americans in popular music history and tells the story of a profound, essential, and, until now, missing chapter in the history of American music: the Indigenous influence. When recalling Link Wray’s shivering guitar classic, Rumble, Martin Scorsese marvels: “It is the sound of that guitar . . . that aggression.” Rumble was the first song to use distortion and feedback. Alfonso Maiorana, Co-director with Catherine Bainbridge and Director of Photography on Rumble, explains to Hot Corn this amazing and deeply moving journey. 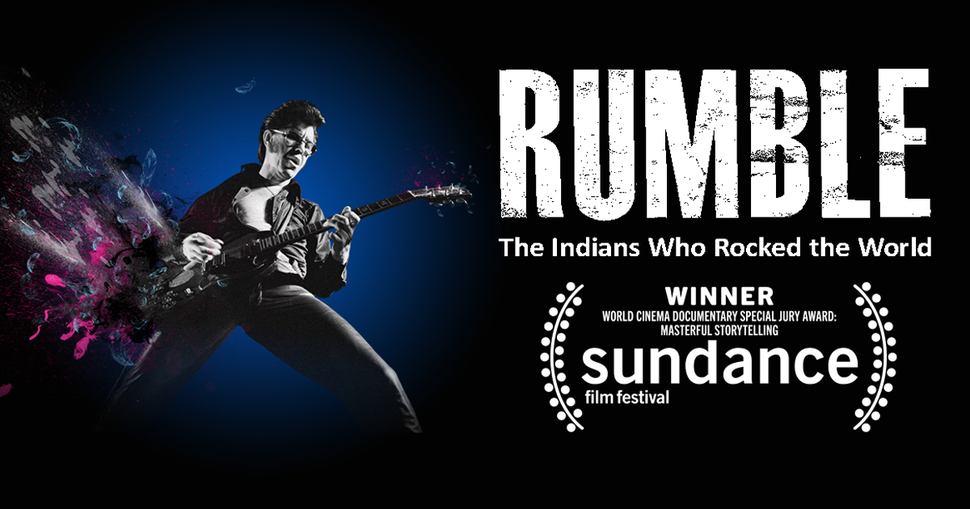 THE PROJECT “We started the project back in 2012 with extensive research inspired by a few important documents. First, Brian Wright McLeod, a Dakota-Anishnabe music journalist and radio broadcaster is the author of The Encyclopedia of Native Music that allowed us to discover the contributions made by Native recording artists and tracing the history of their commercially released music”.

THE EXHIBIT “Second, was the Exhibit at the Smithsonian in Washington, DC entitled, Up Where We Belong: Native Musicians In Popular Culture that highlighted Native people who have been active participants in contemporary music for nearly a century. Here we acknowledged contributions by Buffy Saint-Marie, Jimi Hendrix, Link Wray, Redbone and many others. This was a crucial part of our research, confirming the musical contributions made by these native indigeous artists”.

THE GUESTS “Of course, when you try to contact stars like Iggy Pop, Little Steven, Robbie Robertson or Martin Scorsese, the climb is a difficult one. We used all the contacts we had for the five years it took us to make this film. Everyone on the production team was involved in reaching out to managers, musicians, actors, or other filmmakers. I remember being on the phone with Marky Ramone, trying to convince him for an interview about Link Wray and the punk scene”.

MARTIN & IGGY  “Martin Scorsese’s manager telling us he is very interested in speaking about Robbie Robertson but that he would not be available for the next 2-3 years because he was working on his latest movie Silence. Iggy Pop, my favourite interview, was also interested but was never available. In fact, we were basically done filming and he was in Montreal to launch his book, but fell sick the night we had agreed on an interview session. Luckily, the following week, while I was working on a film set with Bruce Willis in Death Wish, I received a phone call by our producers telling me Iggy is feeling better and would like to film the interview in his hometown of Detroit Sunday afternoon. It was Friday when I got that call. Suffice to say, the next morning I flew out with no crew to Detroit because, this is Iggy Pop!”.

THE GENOCIDE “I think you need to acknowledge the systematic genocide that originated very early in American history to explain the universal neglect of First Nation musicians. Music, traditional dancing and drumming was being banned to crush Native Culture. First, they took away their land and then they began to destroy or attempt to destroy their culture. And of course, music is a huge part of any culture especially indigenious. To explain why this history has been neglected I guess the best thing to say watch our Rumble documentary to understand why in America, you could only be white and black and if you were black you had hardly any voice and if you were Native American as well, it was worse”.

THE DOCUMENTARIES “I think documentary has evolved but not necessarily changed. I grew up in Canada with the National Film of Canada (NFB), a country that excelled in documentary filmmaking. In those days, our schools would be the messenger for documentaries that travelled the country and introduced us to different cultures as well around the world. Today, with the amount of broadcast possibilities, social media, YouTube, documentaries are part of a huge informative revival. The timing is perfect because with the rise of Racism around the world, tolerance and education is an importance fabric of life that we should not deny or neglect. I just hope these documentaries continue to have an impact socially, politically, and economically. We need to feed our youth with knowledge not propaganda”.

MY FAVOURITE  “Wow, my favourite documentary? I have too many. Here is my top 10: Rumble (haha), Hoop Dreams, Night and Fog, Nanook of the North, Hearts and Minds,The Up Series, When We Were Kings, Buena Vista Social Club, Searching for SugarMan, Roger and Me. My main reference for documentary filmmaking is Canadian Colin Low, the inventor of IMAX film (3D), whose documentary Corral won best documentary in 1954 at the Venice Film Festival. He influenced Ken Burns with his 1957 City Of Gold documentary and his 1960 film, Universe was a huge influence on Stanley Kubrick’s film 2001: A Space Odyssey. I had the good fortune to work alongside Colin Low at the NFB and I can honestly say he influenced my visual storytelling for Rumble“.