Just like the subject of the movie, when it comes to documentary The Amazing Johnathan, not all is as it seems. Delving into the life of the aforementioned magician as he embarks on a farewell tour in the wake of his terminal illness diagnosis, filmmaker Ben Berman doesn’t quite realise what he’s signed up for. We had the pleasure of sitting down with Berman when in London, to discuss this lack of control, and how he managed this unique experience. Of course we wouldn’t want to ruin your experience of the film, so we’ve conducted a spoiler-free interview. Which wasn’t easy.

When you realised this documentary wasn’t going to be what you intended – how did that feel? With documentary filmmaking part of the charm is the spontaneity, but at the same can it be daunting not knowing where it’s going to take you?
Yeah, the first six months of me filming I didn’t know exactly where it was going, but luckily the scope I had in mind for the movie was really small, just a 20 minute short film, so it was fine to just be there and film and I wasn’t too hard on it. And then when the second crew came into the mix I thought, whoa, what the f*** do I do? It was a real Hail Mary pass and an experiment to even film them and include that in the movie. I wasn’t confident it would work or what direction it would take, but at least we’ll try. Luckily we did because when I saw some footage and cut some stuff together I realised it could be something, and that’s when I knew what direction the movie could go in, but before then I was just experimenting, it was open. But I’m comfortable with the idea of investing some time and some money without knowing where it’s going to go, that’s a good place to be I think.

Are you still in touch with Johnathan and what does he make of the movie?
Johnathan has seen it, there was a lot of drama surrounding showing him and his wife the movie. We’d been filming two and a half years before I showed him anything, and there was a lot of conversation surrounding what could and couldn’t be in the movie. He was already convinced by the time we were showing it to him that he was going to hate the movie, and he said that if I was to do anything, like question his illness, that he would kill the movie and not allow it to be put out. But we eventually showed it to him and he absolutely loved it, he’s a big supporter of the movie, and yeah we’re still in touch and all is well.

Do you think you’ve changed as a documentary filmmaker as a result of this experience? Because you’re going on your journey, questioning your own prerogatives.
I would like to think, and I’m thinking already, that yes I have definitely changed as a filmmaker. I come from narrative comedy TV, and directing comedy TV in the past I was very planned out and very thorough in my prep work because when you get to set you just have to execute because you have to move very quickly. So I would do all this work ahead of time and then I would be very planned on set, I’d try to control as much as I could. Then I did this documentary and clearly I couldn’t control anything, the unexpected happened and I was put in a position of having to deal with it, not knowing which way I would go with it, but I knew I couldn’t do anything about it, this is reality, so we were able to pull off something that I’m very very proud of, through that model of knowing that I can’t control anything, I can just respond and it’s all in my responses, so now moving forward in docs and back in fiction stuff, I’m going to be more receptive to what’s it front of me as opposed to dictating and planning and controlling what I want, and be receptive to what’s happening.

Has it been difficult to sell this movie to people? Because it’s so important that people don’t know the story, so some may judge this on a surface level as a film about a magician who is terminally ill. Some people may not be interested in that, so you want to let them know there’s a lot more to this, without letting them know exactly what.
I don’t think it has been, because you can say that without saying it, and that’s even more sexy. In our log-line for Sundance it was ‘what begins as a traditional bio-doc becomes something else when the filmmaker struggles to determine what’s truth and what’s illusion’. You don’t know there’s a second crew, or a third crew. It still makes you know that there’s something more under the surface, so it seems to work pretty well.

You mention in the film that perhaps some of the motive behind this documentary, was sub-consciously to explore your own feelings about death and grief. Was this experience cathartic?
I didn’t want it to be cathartic, I didn’t have any pre-conceived ideas, like it would be a big therapy session and I’d come out a totally different person, I didn’t have that idea. And it hasn’t been a transformative experience like that, but it has in smaller ways made me think about my mum more, and it’s been a good thing, but it hasn’t like changed me as a person. I’m still attracted to the subject matter of death and I wanna keep exploring that.

How is it watching the film back? Because it’s an incredibly honest piece of filmmaking, you put a lot of yourself into this. Does that make it hard to watch?
It hasn’t been, but I would like it be sometimes! You see something over and over and over, and you look at things like the lighting. But I hope it’s honest, is there good art that’s not honest? Or maybe there’s good art about things being not honest, that’s interesting. So yeah, I don’t know, it’s not tough for me to watch the movie. What I should answer is like ‘oh yeah I never watch it, it’s too tough, I can’t watch it’, but I love watching it. I haven’t for a while though.

So what’s next?
I’ve been pitching a documentary series that is roughly inspired by the Johnathan doc, going into different paths there. Then pursuing a couple of different doc ideas and I’ve been working on this narrative movie for a while that I’m now putting together. I just want to make great stuff.

Well this is great.
Well then I want to make more great stuff – I wanna make better stuff!

The Amazing Johnathan is out in cinemas now 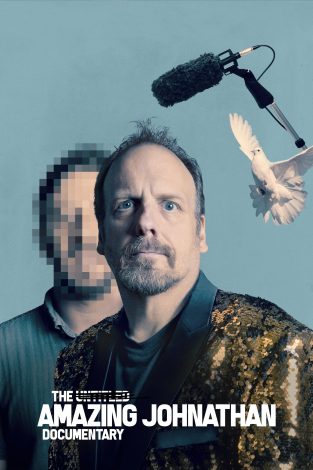